“The app’s vision is to break echo chambers, making sure users always listen to both sides of polarising questions.”

Could you first introduce Polemix to the reader?

Polemix is a new social network for those who don’t like to be brainwashed. The app’s vision is to break echo chambers, making sure users always listen to both sides of polarising questions. The format consists of short videos (some compare it to TikTok and say we are the TikTok for opinions) in which youth and leaders make their points for and against hot topics. The app is designed to promote respect and is a truly safe space. Our motto is “Hate is for losers“.

After proving the concept with a closed MVP (with some thousands of invited users from different top universities), we are starting a series A round of fundraising to take it to the next level. We are lucky several prominent groups are expressing interest in being part of this revolution of open-mindedness!

Smart young people from all around the world (and some very big names) have already been creating short videos making their points on more than 300 topics (e.g. “Should we end Monogamy?“, “Is America Racist?“, “Can money buy happiness?“, “Is Beyoncé better than Madonna“ –and many more!). The revolution has started.

Tell us a bit about your backgrounds?

The following comprises information on our founding team members:

Ian Sielecki is the ex-speechwriter to Argentinian President Mauricio Macri. When studying at SciencesPo and Cambridge, Ian founded Transatlantic Debating – a pioneering association that sought to bring together youth from all corners of the world to debate relevant issues in front of world leaders. He was then recruited by the international President of the New York Times to organize these youth debates as part of the New York Times Democracy Forum at the Ancient Agora in Athens. He sits as a board member for the Democracy and Culture Foundation.  Ian serves as the CEO of Polemix.

Ismaël Emelien is the former Chief Advisor and Strategist for President Emanuel Macron. He was the co-founder of En Marche!, and is widely touted to be “the man behind Macron’s rise” or “Macron’s Steve Bannon”. After Macron became president, he was described by France’s top newspaper LeMonde as “one of three people ruling France”. Another important outlet, Le Journal du Dimanche, referred to Ismaël as “the most brilliant of all” in French and European politics. Ismaël is Polemix’s Chief of Strategy .

Harish Natarajan was the first human ever to debate against  A.I. (IBM’s super powerful AI computer) – whom he swiftly defeated. He is known as the ”greatest debater of all time”, as he is the world record holder for most debate competition wins. Harish is Chief of Debate and Content.

Daniel Pilla is the ex-Head of Mobile and iOS at Globant, having developed apps for JP Morgan, Disney, and Santander, among others. He is an expert in video apps and is the Chief of Technology for Polemix.

What’s the inspiration behind Polemix? And what went into the making of Polemix? How long of a process was the development?

In a way, Polemix has been in the making for 12 years.

The last 12 years of Ian’s life have led to it. As a student, Ian organized international debates, bringing together smart and passionate students from around the world. He realized the potential of taking those electrifying-yet-respectful exchanges to the next level and started inviting prominent figures, such as ambassadors or Nobel Prizes, to take part in them as well.

Although the physical events were lots of fun, Ian realized that, to really make an impact, he needed to create a digital experience and have a great number of young people be able to share their views as well.

The great vision behind it was that social networks isolate people by only showing them opinions they agree with. That creates echo-chambers, radicalizes people, gets them angry and ultimately violent. An entertaining app designed to make users listen to the other side whilst being able to share their views SAFELY (without exposure to haters) would be a solution to that.

Ian knew solving that major problem with social networks would be a gigantic challenge, worthy of the term “revolution”. So he called the only person he knew who had actually designed a revolution: his friend Ismaël Emelien, known as the man behind Emmanuel Macron’s rise and his ex-chief advisor.

They started building the product, recruiting the world’s top expert in debate, Harish Natarajan who was also a friend. They received tech support from an advisor, Guibert Englebienne (founder of the software unicorn Globant, worth 8B), who recommended they recruit his former Head of Mobile apps, Daniel Pilla as CTO.

It took some months to have the initial product ready and launch it for the first community.

What will users gain by using Polemix?

Ultimately, we believe Polemix offers benefits for users such as :

Can you tell us about a significant moment launching the app so far?

The same day we reached 1000 users is the day we got the first hater on the app. It shows symbolically that the hater ratio on Polemix is 1/1000.

It also makes it clear that most people are not hateful in real life and almost all other social networks create dynamics that highlight and promote hateful content.

Do you have any advice for young people interested in getting involved with debating?

Be a good listener. Listen – it is imperative that we understand and make sense of others, before seeking to respond to or engage their claims. Speak to the audience’s needs and psyche, by imagining how you’d feel if you were listening to yourself speak.

Believe in yourself. You’ve got it. We’ve all got voices, values, beliefs, and ideas that are worth listening to – that are worth others’ time. Don’t ever let anyone tell you your voice is not good enough, that your ideas are inadequate because of who you are.

You can read our early review of Polemix here. 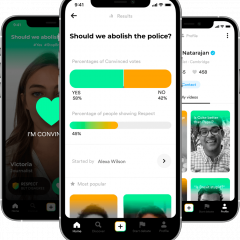 “The app’s vision is to break echo chambers, making sure users always listen to both sides of polarising questions.”