No more leaving politics at the door. Instead, political debating done right.

Recently, I had the opportunity to try out the app Polemix as a beta tester. The app, (available at polemix.io) allows users to debate and argue over particular topics and issues through 30-second speeches.

“We firmly believe that no topic - within the law, that is - should be beyond rational debate and critical discourse, and at times like these, unfettered yet high-quality debate is all the more important.”

The app is easy to use and hosts a variety of interesting and engaging topics. There are two options, one ‘Respect but disagree’ and ‘Convinced’. These options encourage healthy debate in a welcome environment for all. Additionally, these valid points and topics mean awareness is being raised on crucial topics. This app has the potential to be revolutionary in its ease to use and ability to reach out to young people with political topics and world events. It’s easy to digest, not lecture-like and provides a space for young people to make their voices heard.

It’s no surprise that the app is so well versed in a healthy debate as one of its founding team members, Brian Wong, has won several accolades for their debating ability and leads debating sessions at Oxford University and Eton. Impressively, the app is backed by Ismael Emelien, the former advisor to President Macron, and Stephen Dunbar-Johnson, the President of the New York Times and Naomi Panovka, World Women's Debating Champion  – and it’s still just in its beta phase.

Its format is similar to TikTok, but instead provides a wealth of knowledge, opinions and for some, cultural awareness on important issues. A scroll through Polemix will not be a wasted scroll, and in 2021, that’s pretty significant.

If you would like to try out the app, you can download it here, using the code: BW001 . 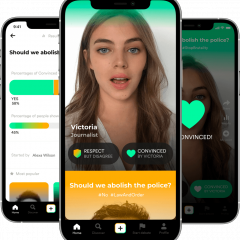 No more leaving politics at the door. Instead, political debating done right.