14-year-old Kiswa Akhtar speaks to the power of open dialogue around racism, the process of creating a magazine, and her aspirations for the future.

Could you first tell us your name and age?

Tell us about ECS Empower?

ECS Empower is the Eastbury Community School magazine designed to raise awareness and reduce (mainly) racial inequalities. ECS Empower got its name because ECS is an acronym for our school and because the knowledge and closure the magazine provides is empowering. We hope it empowers you too!

Why did you decide to get involved in the magazine? What was your contribution?

I joined the ECS BLM Ambassadors to make a difference regarding racial inequalities here at Eastbury and in the wider community. I wanted to do as much as I could (to the best standard I could achieve) for the cause, so when the opportunity to contribute to ECS Empower came up, I couldn't pass! We were able to play to our strengths and choose the sections we wanted to complete. I was interested in decolonising the curriculum, improving communication about racism, being helpful to members of the Black community and police brutality/misconduct in the UK, so wrote those sections of the magazine. As lead writer, I also helped other writers where needed, and suggested illustrations that could complement our writing.

How did you find the process of creating your own magazine? What were some of the fun bits?

I quite enjoyed it! The Black Lives Matter movement and anti-racism are very important to me, so I did all I could think of to do the movement justice through my work. I really enjoyed conducting the research needed to make my pages before writing them. It was an interesting process and made me more aware, meaning that I could educate others. I also enjoyed getting feedback on my pages, as well as getting the opinions of people from other races. This meant that the magazine could serve everyone as far as possible.

And was there anything you found challenging?

I'm a South Asian person, so I needed to get the Black community's perspective on my magazine pages. This was a bit scary at first since I didn't want to be offensive or insensitive in any way, but the Black people I reached out to were appreciative of what I was doing and helped me understand and improve the magazine. People of other races that I reached out to were equally grateful. I encourage you all to talk to people of other races. Interracial understanding is such an important part of reducing racism in our society. When you understand a different race better, you feel – no, you ARE – empowered by that knowledge and can empower others too! (And we could all do with some empowerment!).

How do you feel conversations about race and racism have changed over the last year?

Firstly, conversations about racism have become a lot more common. This is an excellent change because more conversations mean more potential for understanding, which in term means an improvement in regard to racial inequality. Also, people have become more confident when discussing race, whereas before it was taboo, or something people ignored. Being blind to colour actually helps racism, because it reduces the very understanding we need to overcome it. However, some people are hesitant when talking about race, since they don't want to experience backlash if they accidentally say something offensive. This is understandable, and also demonstrates the need for us to create a safe environment for race to be discussed in, and for us to make sure race is a subject people are comfortable discussing. Conversations about race and racism are definitely going in the right direction, and if we're consistent in our efforts healthy conversations about race WILL be the norm one day.

Do you feel hopeful that racism will one day no longer exist?

Will racism no longer exist one day? I believe that inequalities cannot fully be wiped out, but that doesn't mean that we stop trying to reduce them as much as we can. We should recognise that inequalities may still exist in some way, shape or form, and we should use this to motivate us to continue striving for better. If we conclude that problems will be fixed one day, I believe that we would become lazy, allowing these problems to arise once more, perhaps at more dangerous levels. We must never stop fighting because we cannot do ourselves and future generations the injustice of suffering preventable calamities.

In the magazine I was really interested to read about dealing with racism in school, and that 80% of students polled had seen at least one racist incident. Is this an issue you feel is being dealt with appropriately? What more could be done to tackle it?

At the current moment, I believe a lot more can be done to deal with racist incidents and racism in schools, but to fix this we need students’ input too. For example, I believe that teachers should always call out casual racism or racist ‘jokes’ in class or during break. Allowing racism to be committed by any student, regardless of how troubled they may be, shows that all racism is acceptable, and this is clearly not the case. We should tackle the problem in its early stages, so it cannot turn into someone else’s trauma or a killing in the future. I feel that having a system where students can anonymously report racism would be great. This would make students feel safe whilst they help make a positive change in society. As students, we must realise that teachers cannot always be there at school and won't be there when we're older. So, it is our responsibility to intervene and stop racism or, at the very least, not participate in it. Calling out racism would make the perpetrator embarrassed, making them stop. Not taking part in the problem obviously reduces it.

Are there any particular people, projects or initiatives that you think are doing good work in challenging racism at the moment?

Teachers at Eastbury educating us about racism and sharing their experiences is liberating. So often young people are disregarded, and our opinions are ignored. Being educated about world issues not only empowers us with the knowledge to tackle them but makes us feel important, and gives us the confidence to take action to tackle them. The media is also helping. There’s a greater focus on race now and news outlets do cover it more. This means that the issue is harder to ignore for those who don’t want to face it, but can also mean that those who are trying to be anti racist are having their mental health damaged. There are countless individuals consistently putting effort into this cause and keeping it afloat. I am very grateful to them, but it would take centuries to name them all!

What do you want to be when you get older?

I want to be the Member of Parliament for Barking. I would like to raise my town to its potential and beyond. I want to be in a position where I can give people the opportunities I wish I had. I would like to have enough power to represent my constituents and the forgotten souls in our society. We all deserve better, and it's our world too. I want to make sure that everybody's world serves them as much as it possibly can. England is not meeting its full potential, and as a result, its amazing, admirable, hard-working population is suffering. I want to reduce this suffering. I want to serve Britain's current people and future generations. I will strive towards cabinet positions to do so.

And, thinking broadly, what is your biggest hope for the future?

That the world will be a better place to live and thrive in. That people will be thriving instead of just surviving. That people will be better equipped to reach their full potential. That as many limiting factors as possible are eliminated, so people can be happy and do what they want to do. That (world) leaders would put their egos aside and unite to whole-heartedly solve issues that could be the downfall of us all. Our goals are common – generally, people simply want happiness and love. I’m confident that working together would mean more widespread achievement of these goals and more satisfaction within our communities. Unfortunately, we cannot have everything we want. But I want to give us as much good as we can have. We are so much more than this, and we should be.

Yes. I want to echo that antiracism is not a trend. Racism and inequalities are people's everyday realities, it is absurd for us to raise awareness for a day or week then turn a blind eye once more. Once we all put in consistent efforts, the rewards of our efforts would be more visible and helpful for everybody. We must unite and do this together. If people like us, if we are the ones fuelling racism out of hate, we are also the ones who can erase it out of love. And I genuinely believe that no force on earth can overpower the relentless human spirit, and this is even more so for the determined relentless human spirit.

Kiswa Akhtar is a contributor to ECS Empower. To find out more about the magazine, and hear from other young people who worked on it, follow this link. 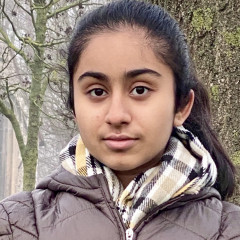 14-year-old Kiswa Akhtar speaks to the power of open dialogue around racism, the process of creating a magazine, and her aspirations for the future.