We speak to writer and director Vicky Moran, whose new theatre production No Sweat is a hard-hitting examination of the hidden LGBTQ+ homelessness.

I’m Vicky Moran, the director and writer of a brand-new theatre production on now at The Pleasance Theatre in London called No Sweat - a work uncovering the staggering numbers of forgotten LGBTQ+ displaced youth finding solace in gay saunas.

A typical day for me is getting up and having a sing in the shower. Then I can usually be found facilitating a creative workshop of some sort in a community somewhere in London. I usually find some time to write some poetry during the quiet moments in my day and spend my evenings (currently) watching Sex Education.

What bits do you enjoy?

I enjoy all of them. I try and balance my day as much as I can so it’s a nice spread of challenges, creative time and binging on a good tv show!

And what are the parts you don’t?

I work freelance so I can often spend time in my days looking out for the next project and writing applications. That can get lonely at times. I much prefer the days when I’m surrounded by a group of people and we can bounce ideas off each other and feed off some creative energy!

Why did you first want to get into theatre?

I’ve been in theatre as long as I can remember. Since I was a kid, I wanted to be an actor and went on to study it at university where I learnt I’m really bad at remembering lines! I loved being in and around the theatre regardless, particularly taken with the fact it could be used to make some social change. I was also doing a lot of charity work at the time and realised there was an opportunity to combine the two.

Being able to educate myself through an art form was a crazy notion to me in the early days, but I always knew I would use a creative medium of some kind to express myself. Turns out that medium was theatre.

And what was your career path to getting to where you are today?

It’s been long and varied! I went to University in Essex where I studied drama and was particularly into the modules that looked at human rights and gender. I then went on to do an MA in applied theatre at the Royal Central School of Speech and Drama.

Not long after that I did some placements at a variety of places including Chickenshed – a really inclusive theatre company for young people based in North London; Clean Break – an amazing company founded by women in prison who believe in the power of theatre to transform lives; and Cardboard Citizens – another brilliant organisation who have making with and for homeless people for more than 25 years.

I spent some time in Ethiopia working with street kids doing some journalism work at a youth festival in South Africa. I then founded a Queer projects company with some friends called SOURPUSS which is still going. All of that work led me to start running workshops across hostels, prisons, rehab centres, and community / youth centres around the UK. It was from there I got a job with Cardboard Citizens where I was Assistant Director. I left to go freelance so I could create my own work, hence No Sweat was born!

Your latest play, No Sweat, tackles the shockingly high percentage of young homeless people who identify as LGBTQI+. How did you first become aware of the situation?

It was really through all of my work in different communities and Cardboard Citizens. You speak to a lot of different people. It was through that I really started to learn more and more about how bad the situation is. I began meeting up with people who were experiencing it themselves. Lots of coffees and chats in cafes and realised, damn this is a thing. A really big thing.

The biggest part of the process of writing No Sweat was making sure it wasn’t just my script. Other people have contributed to the stories being told sharing their own personal experiences, so it was really hard to make sure everyone’s voices were represented. I want everyone to make their own mark on the show so they feel empowered.

What was the hardest part of writing the play?

The hardest part of writing the play was combining verbatim interviews and dramatising it and doing so smoothly. The show features very real voices. It was hard to make sure all of their narratives fit together and intertwine to make one full performance, but I’m really pleased with how it turned out.

When you’re dealing with people’s life stories, you have to do it well. Mental health plays into the work massively too. We’re all human and have different vulnerabilities so that’s a sensitive process to navigate. Not everything tackled in the work is easy to talk about so making sure we handle issues as effectively as possible was key. We want to raise awareness and stop other young LGBTQ+ people going down the same route.

All of that, and I’ve never written a full-length piece before. I’m also the Director and Writer on No Sweat which is a first for me, so that comes with its challenges too!

No Sweat also features an original score. How do you go about deciding an appropriate accompaniment for such a play?

I got an awesome sound designer and shared my vision with them. We wanted to create the immersive feel of the sauna and create a soundscape that makes you feel like you’re really there. James Ratcliffe has managed to do just that!

Why is homelessness among LGBTQI+ young people so high? What can be done to solve it?

There just isn’t enough housing. People don’t feel safe going into normal hostels, if they’re lucky to be temporarily housed that is, and there are very few LGBTQI+ shelters in the UK. The people who do get housed into LGBTQI+ housing are those who are priority need and most at risk. Trans, POC that have fled violence from their countries, rough sleepers - and that is rightly what should happen. However, what about the rest? Where do they go?

There is still so much transphobia and homophobia in our society. If people don’t feel safe in their sexuality, it can be so damaging. As a result, they turn to alternative accommodation and put themselves in risky situations. Another side to this that we uncover in No Sweat is that a lot of people don’t even know or identify as homeless, because they are sofa-surfing, survival sex-working or sleeping anywhere they can find.

They’re not what society necessarily thinks of as homeless, so a lot of it is about education. Knowing where to go to, where to seek help and knowing that you can and should.

What can someone expect when they see No Sweat?

They can expect to be hit right in the feels. There are moments of joy, laughter and hope in the show but ultimately it is a play about community and friendship. It’s a play based on real life stories and it doesn’t shy away from telling some that the audience might find very hard to imagine happening to them.

It is gritty, it is raw, it is political – even some of the team I’m working with to create the show couldn’t believe the stories shared with me that have ultimately ended up in the script. But we want to share this reality for many. Then it might be just that little bit easier to talk about. It is the real world presented onstage so expect the unexpected.

If you could send a message back to 16-year-old Vicky, what would you say?

And what advice would you give to someone who wanted to follow in your footsteps?

Don’t pretend to be posh in the arts to get you places. You do you like no one else can. Oh and don’t compare yourself to other people who are nothing like you. Age doesn’t matter either, so don’t let that stop you.

Where can people see No Sweat?

We have also launched a pay it forward crowd fund where you can buy a ticket for someone who might not be able to afford to see the show. We will also be holding a number of post-show events where you can hear more about the LGBTQI+ homelessness crisis. All of the details are on The Pleasance website. 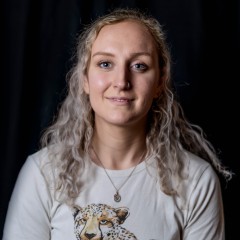 We speak to writer and director Vicky Moran, whose new theatre production No Sweat is a hard-hitting examination of the hidden LGBTQ+ homelessness.