Rem discusses his trajectory into the arts, the lack of diversity within creative industries, and his decision to set up his own organisation to tackle this

Happy New Year! I hope whoever is reading this has a positive and prosperous year, that’s my slogan 2020. That being said, I am Rem Conway - CEO of Conway Network.

Why did you want to be an actor as a child?

Initially I fell in love with the imagination element of acting; as a child it was such a great feeling to be free in imagination and expression. I also used to watch films and TV all the time. I’d sit there and just imagine myself in drama scenes, action movies, comedy scenes etc. so I knew quite early on that I wanted to be an actor and work in Theatre, TV & Film.

What was it like to have such a limited range of roles available to you?

Frustrating. Growing up a lot of the films I consumed were American - where diversity was still a problem but there were still stories of black actors and actresses experiencing everyday stories. From comedy to drama to action, black actors were doing it all, so I went into the industry thinking that the UK would be the same; so when I was going to auditions and it was the “drug dealer”, “gang member”, “drug dealer’s assistant” roles, I was devastated. Reality was, the majority of the roles available to me at that time were stereotypical roles. I’m just so glad it is slowly beginning to change because I almost gave up on the industry because of this. From this experience, I decided to leave my agent and start creating the roles I wanted to see, I went onto write and direct theatre plays that explored more diverse stories and offered more diverse roles to black actors.

How did the BBC apprenticeship change your career trajectory?

I had always wanted to work in film and television and from the work I was doing in theatre, I really wanted to do the same in TV and film. I thought I could knock on the BBC’s door and say “Hi, I’m Rem. This is what I do. Let me do it here!” but I realised that it wasn’t that easy. I needed to get in there, prove myself and then hopefully the opportunity would arise. I decided to apply for the apprenticeship because it offered so much insight into so many different departments within the BBC, and gave me the opportunity to figure out what it was I wanted to do there and how to start creating diverse content for them. The BBC Apprenticeship really helped me identify what my route was, what other passions I had and what I did and didn't want to do in the industry. I think having that year to just explore that, whilst learning and earning - it was priceless.

What is the Conway Network and why did you decide to found it?

Conway Network is a Birmingham based organisation that houses: a part-time drama academy that provides creative short-courses, a production company that develops content for TV, theatre, film and online, industry events, and an acting agency that supports diverse talent (www.conwaynetwork.com).

I founded this company as a solution to diversity. Do I think a lot of the leading creative media organisations fully understand diversity? No. Do I think that it is an easy problem to solve? No. But I do believe Conway Network will be a huge contributor to getting us to true diversity. Our diversity issue needs attacking from the root - yes we can diversify the talent that is seen on the screen and stage, but what about the crew? Writers? Directors? Producers? Creators? We have to diversify at all levels in order to get diversity in storytelling. So I founded Conway Network to encourage more diverse people to consider the industry, help eradicate the elitism and nepotism in the industry, and increase the opportunities available in the West Midlands.

You’ve been involved in various aspects of the creative industries; what is it about the arts that you enjoy?

I love the challenge, the unpredictability and creativity of the arts. I’ve always been somebody who searches for the job that makes me feel like I’m not working; the job that I’d get out of my bed for free for, and the arts is exactly that.

What advice would you give young people that want to go into a creative career?

There’s so much advice that can be given to someone considering this industry, but I think some of the key things I have learnt on my journey are:

Thanks so much to Rem for taking the time to do this interview!

This interview has been edited for clarity 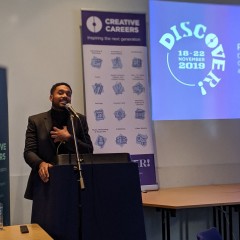 Rem discusses his trajectory into the arts, the lack of diversity within creative industries, and his decision to set up his own organisation to tackle this