Voice MagInterviewsWant my job? with Jo…

Wondering how to make it as a comedian? Discover John Pendal's pathway into the arts...

Hi, my name is John and I work as a comedian performing solo shows around the world and shorter sets in comedy clubs.

As I’m not signed to an agent, honestly it's mostly admin! Every day I’ll be thinking of ways to promote ticket sales online, by creating videos or targeting special interest groups. I record every solo show and listen back to see if there are new jokes that can be added to the script or lines that can be cut. Very little of my job is on stage – most of it is sat at a computer or travelling to a gig.

Making people laugh is the best feeling in the world. Someone who doesn’t know you has turned up, you’ve strung some words together and in response their body makes involuntary laughter. Isn’t that weird? And then I get paid! I still can’t get my head around that as a concept.

Even at your very best gigs one person will not like your act. The whole audience can give you a standing ovation but someone may still leave the room angry saying “I hope you don’t think I’m paying for that!” Part of this job is learning to play to the laughers and not worry about the people who can’t be won over.

One highlight was performing to 700 people in Denver, who lined up cocktails along the front of the stage for me while I was still telling jokes. Another highlight was writing this year’s show about things that have given me shame, such as going through gay conversion therapy, which received 4 lots of 5 star reviews at the Edinburgh Fringe. I didn’t expect that at all – I thought the show would only appeal to people who’d been through the same experiences as me.

I spent 15 years working in television: 10 years in broadcasting (behind the camera) and 5 years in post-production. Then I won a competition in America called “International Mr Leather” which led to appearances all over Europe and North America giving speeches and hosting fundraisers, talent shows and leather contests. I realised I loved being on stage more than I liked sitting at a desk doing admin so I made the jump to comedy… little did I know!

I score highly in tests for autism so I struggle with networking and small talk. A lot of comedy bookings are made socially by turning up at clubs and talking yourself up. I can’t do that. It just means I work harder at applying for gigs by email and finding my own work.

The traditional model of regular work at weekend comedy clubs entertaining large crowds of drunk people is shrinking I think, mainly because audiences have access to stand-up comedy on streaming services at home. But new kinds of comedy clubs are being created which are doing really well, such as comedy clubs for parents with kids, or clubs which guarantee the audience aren’t picked on. There are a large amount of people put off going to comedy clubs because they think acts will pick on them – so if you promise not to do that you can reach an untapped audience.

Everything you hate about yourself now will turn out to be a super-power. You don’t like your body because it’s too skinny, but in your twenties and thirties you’ll have a hobby as an escape artist. You struggle to make friends because of autistic traits – that will make you focussed and determined enough to win “International Mr Leather”. You are desperate to fit in, but actually the things that make you different are the best things about you. Relax – it will get better in the end. Also, try taking a shower every day. A lot of your problems would be solved if you stopped being allergic to water!

Try to gig as often as possible: the good gigs will keep you going and the bad gigs will teach you to improve. Record every gig and listen back to it the next day. Analyse what worked and what didn’t. Is there any way you can change your set-ups so the punchlines get bigger laughs? Never be content with your set. Always be prepared to edit. You’ll get better quicker if you’re prepared to let jokes go that aren’t as good as your best ones. And if the industry isn’t giving you the breaks that you want, create your own opportunities. Online content, podcasts and streaming services have meant that now more than ever we can create our own path.

John’s website is www.johnpendal.com, or you can find him at: 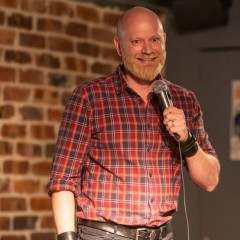 Want my job? with John Pendal

Wondering how to make it as a comedian? Discover John Pendal's pathway into the arts...