"Responding to events isn’t just about world politics; it’s about responding to events in your own life: your relationships, your desires, your disappointments. Every good solo show or comedy set responds to the personal and somehow captures the universal."

I’m Diana Dinerman. I’m a writer, stand-up, and actor based in Los Angeles.

And, I have a great name.

Introspective, moving, relatable. DETOUR is a manifesto on redirecting your own life. But, unlike most manifestos, this one is funny.

I want to share my life experience and hope with an international audience. I’ve never felt less cynical about the world than I do now and that’s quite surprising given the amount of tragedy on the news. Edinburgh is a great celebration of free speech and individuality. We need each other for inspiration and motivation, so I think of the Fringe as quality time with the family - the large, dysfunctional, highly sensitive, fun and loudest members of my family!

This is my first festival, period. Whoa. The Edinburgh Fringe is the only place in the world where you can see this much expressiveness, bravery, artistry, and comradery amongst international artists in one place.

When I was a kid, I watched anything on television that had any dancing in it. In the US, that meant Solid Gold, Soul Train, and Fame. I loved the Carol Burnett show and Gilda Radner. Any time I saw singing and dancing combined with humour I was transfixed and it’s all I wanted to do.

I’m about to get earnest. Being a writer and performer is my dream job. It’s the most invigorating, life-affirming work to connect with other people through your creativity. It is my calling and I am lucky that I woke up to that before it was too late.

I wrote a poem about lemon pie. I said that eating it felt like the sun.

I don’t sit down to write and think, how can I incorporate this event, catastrophe, etc.? because I’m not responding the news as much as I am responding to how it feels to be alive right now. I think that’s what having a point of view is. Responding to events isn’t just about world politics; it’s about responding to events in your own life: your relationships, your desires, your disappointments. Every good solo show or comedy set responds to the personal and somehow captures the universal. I believe in a collective consciousness so if the idea is coming out of me, I trust that it’s relevant.

My feminist point of view has grown and is taking up more space in my work as the discussion around female expansion and visibility in public life has emerged at the forefront of popular culture. The increase in public discussion on this topic has influenced my point of view and made my work more relevant and urgent.

If you could work with anybody, from any point in history, who would you pick and why? Lester Horton, the great California choreographer, who died in 1953. He was a genius on the wrong coast. He was a permissive artist and a great visionary, and I spent 10 years of my life researching his dance theatre when I was a historian. If I met him, it might change everything I think about him!

There’s no such thing as being perfectly ready. You become ready in the middle of the leap. The most important thing is to have a clear intention for bringing your work to the festival. If your intention is clear and you remain faithful to it, you will grow immensely, you will fulfil your purpose. You will feel like you’re flying.

DETOUR:  A Show About Changing Your Mind is at the Edinburgh Festival Fringe from 31st July - 26th August (not 13th) in Underbelly Bristo Square’s ‘Buttercup’ at 2.35pm. For tickets and more information: https://tickets.edfringe.com/whats-on/detour-a-show-about-changing-your-mind 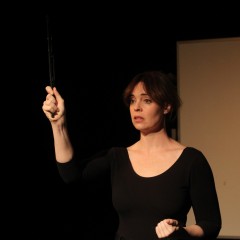 "Responding to events isn’t just about world politics; it’s about responding to events in your own life: your relationships, your desires, your disappointments. Every good solo show or comedy set responds to the personal and somehow captures the universal."