"I finished high school, didn’t go to university and moved to the UK on a one-way ticket when I was 18, where I immediately began bar work (because I love breaking those Aussie-abroad stereotypes)."

Hello! I’m Brodi Snook, I’m an Australian stand-up comedian and all-round good guy. I once keyed my own car while trying to get away from a wasp.

My show is called ‘Handful’, inspired by the time that I went on a first date and I was called a ‘handful’ within the first five minutes. Dear reader: I did not marry him. I challenge the negative connotations associated with being thought of as a ‘handful’, which is such a typical handful thing to do. There are also lots of fun stories and secrets and things that I should be too ashamed to say out loud. We then all leave as new best friends and go for a pint.

This is my Edinburgh fringe festival debut and I am excited and nervous in equal measure. I feel like it is such a huge rite-of-passage as a comedian and I’m grateful to be able to do it. This is my fifth year of doing comedy and now I can finally join in on those ‘are you taking a show to Edinburgh?’ conversations in comedy club green rooms!

Oh, you know, just the small matter of it being the BIGGEST arts festival in the world. Not that I’m letting that psych me out or anything.

The desire to try stand up was a filthy little secret of mine for years. Growing up in small-town Australia, I had very limited access to watching comedy- there wasn’t much of a selection on any of our four television channels, two of which exclusively played the news. I rented out every comedy VHS, read any comedian’s biography I could find and would spend my after-school job pay on catching the bus to the next town to go and see whoever was stopping by on their regional tour. I remember seeing Judith Lucy swaggering about in a gown, drinking wine and making the audience squeal with her crazy stories and thinking, ‘yep, that’s what I want to be when I grow up.’

I finished high school, didn’t go to university and moved to the UK on a one-way ticket when I was 18, where I immediately began bar work (because I love breaking those Aussie-abroad stereotypes). I wish a had a cooler answer for this, but seeing as my skill set is solely comprised of telling jokes, pulling pints and mopping up sick off a dancefloor, it would be bartending. Please buy tickets to my show to help me avoid this fate.

I’ve always thought that being a location scout for film and television would be an amazing job. Anything that combines work and travel would make me pretty happy. You should see how excited I get when I get to stay in a hotel in Birmingham or Newcastle for a weekend.

I remember writing my name down on a piece of paper for the first time. In hindsight, I realise I wrote every letter backwards except the ‘o’, but it’s the taking part and the enthusiasm that counts. And that is a message that I am bringing with me to the Edinburgh Fringe.

Not pressure as such, but certainly a responsibility. As someone with a platform of sorts, you don’t like to think you’re wasting it. That being said, I’m a big believer in if you don’t have something worthwhile to say, don’t say it. I have a huge amount of material that I have binned because it was more TED Talk-esque than comedy. It’s a challenge to find the humour in serious topics- something I explore thoroughly in my show with a particular story. There’s a brilliant quote I heard somewhere that I’ll paraphrase here: Not everything is funny, but there’s funny in everything.

I think the #metoo movement has affected a lot of women in the arts and media, both positively and negatively. Personally speaking, without the huge social dialogue it opened up, I wouldn’t have the confidence to tell certain stories that are in my show this year.

In a very cliched answer, I’d have to say any of my comedy heroes from childhood. Gina Riley, Jane Turner and Magda Szubanski are the Aussie comedy icons behind Big Girls Blouse and Kath & Kim. As a kid I used to relentlessly watch the DVD outtakes where they would all be corpsing and imagine what it would be like to be on set with them. My favourite Youtube rabbit hole to go down is the outtake clips from the live Bottom shows. Working with Rik Mayall would have been both incredible and impossible. I would love to work with Jo Brand because she is a sassy legend and my latest pie-in-the-sky dream is to be to be on Conan. Already picked my outfit.

As a newbie to the Edinburgh fringe, I can only speculate thus far. I have a lot of friends who do the Free Fringe every year and it works well for them, as it is less of a financial hit and ‘bucket shows’ can be very fruitful. However, the whole it-takes-money-to-make-money philosophy certainly applies when having a ticketed show. Ask me again when I’ve done both!

You can only debut once, so play the long game. Wait until you have the finances and a show you are proud of.  I also highly recommend attending Edinburgh fringe as a punter, go and see as many shows as possible in as many different venues. Really do your research, so that when the time comes you have a solid idea of what you want for you and your show. Also, when in Edinburgh, go and get breakfast at Spoon on Nicolson Street. They do the best eggs and the staff are fit.

Thanks for asking! You can see my show ‘Handful’ at Gilded Balloon Teviot (the Wee Room) every night at 8.15, apart from the 13th. On the 13th I will be napping.

My parents had the foresight to give me a unique (weird) name, so you can find me on all social media @BrodiSnook. My website is brodisnook.co.uk where you will find a poorly attended to blog and a list of upcoming shows. 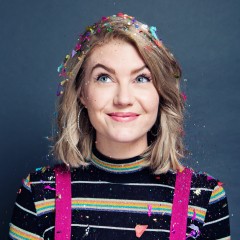 "I finished high school, didn’t go to university and moved to the UK on a one-way ticket when I was 18, where I immediately began bar work (because I love breaking those Aussie-abroad stereotypes)."