We are just like Ant and Dec! Except less famous and successful. And with vaginas.

We are Ellie Gibson and Helen Thorn, otherwise known as the Scummy Mummies! We are a comedy double act and each have a side we always like to stand on - yes, we are just like Ant and Dec! Except less famous and successful. And with vaginas.

It’s an evening of laughs for less-than-perfect parents - so that means all parents. We all have a lot of non-parents coming to our shows too, and they seem to enjoy laughing at our predicament. One woman said she likes our show because it reminds her to take her Pill.

It’s been our dream to perform at Edinburgh ever since we met six years ago, at a terrible gig inside a shipping container in Deptford. We haven’t made it up there due to pregnancies, babies and school holidays getting in the way, but now we’re finally doing it! We’re so excited!

It’s the big one, isn’t it? We’ve done music festivals before, but they’re park runs compared to the marathon that is Edinburgh.

Ellie’s dad is a semi-retired comedian, and Helen’s dad is a vicar, so we grew up watching people telling weird stories that may or may not be true to people who may or may not be listening. We’re inspired by the likes of French and Saunders, of course, Mel and Sue, and our own mums (who are often funnier than our dads, ssshhh.)

Ellie was a video games journalist before comedy, and Helen worked in arts events. So we’d probably still be dicking around with PlayStations and black polo necks.

We have four children between us now and we are very tired. So if there’s some sort of job where you get paid for lying down, that would be ideal. Mattress tester?

Going on a school trip to the National Gallery, and laughing at all the willies.

Obviously it’s hard to ignore the fact that Brexit’s a huge mess, women’s rights are being eroded, and the world’s on fire. So yeah we do feel like commenting on that from time to time, in between boob jokes.

When we started out, people praised us for being honest about the realities of parenting. Now that’s become a trend and everyone’s whinging on about how hard it is, not just us - which hopefully is a good thing.

Dolly Parton. We have a similar aesthetic, and we’d really like to borrow her wigs.

We’re doing a ticketed event but that’s just what we’re used to - we already do ticketed shows all over the country. The advantage is you know how many people are coming to your show; the disadvantage is there’s no chance of a really pissed person dropping £50 in your bucket by mistake.

We can only speak from our own experience - the fringe is a big financial investment, so we’ve spent years honing our material and working out our dynamic before committing. We’ll see if that’s paid off soon! 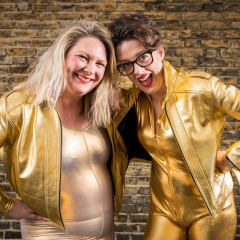 We are just like Ant and Dec! Except less famous and successful. And with vaginas.