I just don’t think its within me to talk about these issues as much as audiences enjoy comedy like that I think its also nice to have some escapism from it.

Hello Reader, I’m Jack I’m from Hull and my favourite food is a kebab.

My show is about how I got into Showbiz, from working in retail to being banned from the Magic Circle, whilst also talking about my influences from Saturday Night Entertainers. I think it has something for everyone I want it to be a fun and enjoyable hour where people can just forget all their troubles and watch a silly northern man tit about for a bit.

Its always been something I wanted to tick off my comedy bucket list being able to say that I did my own show at The Edinburgh Fringe and for family members to look and me say ‘‘What’s that then?’’.

The length – I think if Glastonbury was this long there would be no survivors.

There is just something different in the air, I remember when I first visited in 2012 and I fell in love with the place, I feel like I’ve found somewhere which gives me the same feeling Christmas did when I was a child which is a mixture of love and disappointment.

I first started performing when I was 10 and I became a magician. I was inspired by people like Penn and Teller and Tommy Cooper and I loved performing comedy magic. Eventually I realized I wanted a social life and dropped the magic and turned to the comedy, my main comedy influence has always been Lee Evans but I take lots of inspiration from people like Eric Morecambe, Norman Wisdom, Bruce Forsyth. I’ve never really wanted a normal job comedy is just something that has always felt right.

I’d probably still be at Primark picking peoples shoes off the floor and catching the clothes that they threw at me.

Although things still get thrown at me dependent on what gig I’m at.

I wish I could sing like Frank Sinatra and have my own show in Las Vegas.

I’ve always been a keen artist. It’s what inspired me to become legendary street artist Banksy.

No I just want my comedy to be a bit silly and fun and I don’t think anyone would take anything I say seriously anyway! I think its great that comedy like this exists though I just don’t think its within me to talk about these issues as much as audiences enjoy comedy like that I think its also nice to have some escapism from it.

I don’t think there has been a major shift in what’s funny as what’s funny will always be funny which is funny. It hasn’t personally affected my work but then I think it would be difficult to find anything offensive in what I do.

Bruce Forsyth and Norman Widsom – they were incredible performers and entertainers. I would have loved to perform with them when they collaborated on Sunday Night at The London Palladium. I’d ask Bruce how he could successfully sustain a career over 75 years and still be fresh and entertaining to all the family. For Norman I’d just ask for a masterclass in physical comedy, every move and expression he made was undeniably brilliant and well thought out.

I think the Free Fringe is a fantastic thing and something I have been apart of in the past, the reason I wanted to do a paid venue this year is because my show is quite technical and requires a dedicated space and with the free fringe it can be a bit a lottery in terms of getting the room you want. I’ve been very lucky this year to get my dream venue, but I will continue to support and see shows on the free fringe

The best advice would be experience Edinburgh without doing a show first – enjoy it then come back and enjoy it all again with the added stress of performing your show!

Its at The Pleasance Courtyard in Pleasance Below at 5:45pm- 6:45pm – Every Day apart from the 12th because I’m going to have a lie in and a kebab.

Jack Gleadow’s debut stand up show ‘Mr Saturday Night’ will be at the Pleasance Courtyard Below at 545pm from 31st July – 25th August for tickets go to www.edfringe.com 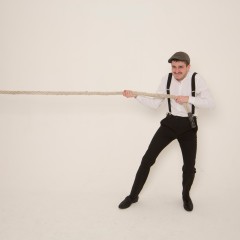 I just don’t think its within me to talk about these issues as much as audiences enjoy comedy like that I think its also nice to have some escapism from it.