"Bowie is probably the person I would have most liked to see in action. His creativity levels and consistency were off the scales."

Hey, I’m Al, one half of pop band the Hoosiers, who are you? We are performing our new Comedy show ‘Self Help Yourself Famous’ at this years Fringe.

The show is loosely-based on our own ups and downs music-business and it’s as absurd as we could make it without being incomprehensible. Ha. There is a serious edge to the show as we deal with our own connection with fame and its trappings. It's a crazy, and at times, cold industry with a shed load of pressures that no one warns you about, and so we wanted to talk about how a glamorous industry can be quite unglamorous at times. So if nothing else let’s hope it’s insightful.

We set the show as a Self Help Seminar – but the wheels quickly come off. There are songs and dancing (both classically trained in tap, ballet and Hip Hop) so it would be a waste not to show off these hidden talents, right? Ultimately we wanted to make people laugh as much as we laugh at ourselves: It's a comedy so were hoping it’s funny.

It's the place to be for ‘newbee’, and indeed ‘oldbee’, comedy performers. I’ve been twice now and it’s such a brilliant atmosphere, with sooo many talented people. Edinburgh is such a sweet setting too. Scottish people seem so much more on side whenever we have played gigs. Which I think adds to the flavor. I don't think this would float in London.

The festivals we are used to are 2/3 day events with 3 or 4 stages. Edinburgh is the biggest, most ‘festivally’ festival I’ve ever been to. And the fact it’s so heartily embraced by a whole city makes it very exciting.

Myself and Irwin have always been inspired by comedy. But the concept for the show was born when Irwin suggested writing a ‘Dummys Guide to being in a band’. We messed around with this concept for a while (and may well return to it) but it morphed into a comedy show with music. It’s been a joy to write. I guess we are inspired by anyone brave who aims at doing something different. I guess that would be Bowie or The Flaming Lips in the music world, or The Mighty Boosh, Stewart Lee or Garth Merengue in the comedy world – the list could obviously go on and on.

What are the hours? President of Bora Bora.

Always a big fan of the potato stamping. Also did a couple of magical bark rubbings in Year 5. Music was always my first love. I started playing the drums at school, because I was so rubbish at music lessons and was fed up with playing the tambourine. My inner stubborn kicked. Ultimately, for me, I wanted to be in a band: art to me has always been a team sport.

We have always tried to avoid this. But absolutely – it feels like it's the responsibility of major/minor/very minor celebs to commentate, and there was always a pressure from the record label to be an ‘online-presence’. What results is such a high flow of opinion that we end up only hearing the loudest/largest-followed people and personalities, who, more often than not aren’t the most qualified to comment. I’m not a fan – and we cover this loosely in the show – why do we need to know that Pitbull voted for the Green Party in the recent European Parliament elections? That said – it can be very amusing. And of all commentators, Pitbull is top dog!

Ahh. It’s hard to say. I guess in the early years when we ballooned onto the scene people looked at us as a fad/gimmicky creature. Cos we were a little more colourful than the grey (not an insult) Indie bands of our time. I think anyone who toughs out this industry for more than five years is doing well – and we feel that like a sympathetic pat on the shoulder every time we play live. This move into comedy, a dip of the toe, is purely self indulgent though – and it’s our huge privilege to be able to have a go at it.

I like to imagine Irwin as a lutist for Henry the VIII: a sort of court jester – art at its highest stakes. I think writing in the 60’s and 70’s would have been the most inspiring – a social movement, when music and art were fighting for something.

Bowie is probably the person I would have most liked to see in action. His creativity levels and consistency were off the scales.

The Free Fringe is a great opportunity to get your show out in the world with a smaller initial outlay: the hope being that people discover you. This, versus the ticketed event – which is more expensive to launch and promote but, from my very moderate understanding, places you much more in the public eye. I see a parallel with signing a record label versus promoting independently. I hear that there are more people looking at alternative methods, such as ‘pay as you go’ and ‘bucket collections’.

This is our first year – so I have no direct advice based on experience. But I am a big fan of throwing yourself in fully committed to anything you do. Make sure you allow yourself lots of time to get your show ready and surround yourself by good people who are willing to give you honest and brutal advice. We are in a generation of people who think fame and success is an overnight thing – but that just isn’t the case in the majority of cases.

Felix & The Scootermen’s debut comedy show ‘Self Help Yourself Famous’ will be at the Underbelly Friesian on Bristo Square from 31st July – 26th August for tickets go to www.edfringe.com 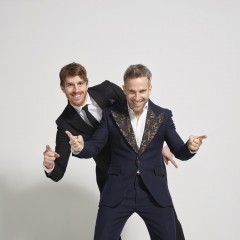 Interview with Felix and The Scootermen

"Bowie is probably the person I would have most liked to see in action. His creativity levels and consistency were off the scales."