Voice MagInterviewsInterview with The Q…

Described by critics as the Millennials’ answer to Rocky Horror, The Quentin Dentin Show has developed a cult status among theatre-goers. The show’s composer and lyricist Henry Carpenter avoids the comparison, instead pointing to New Wave rock-band Devo and other 80s icons such as David Bowie as his inspiration.

Following the release of the Original Cast Recording, Carpenter pulls back the curtain on Quentin Dentin, revealing how the rock-pop musical came about, what we can expect from the latest soundtrack, and his advice for what you should do when life gives you lemons. (Hint: he doesn’t make lemonade).

Quentin Edwin Dentin. Who is he, where did he come from, and what’s his show all about?

Quentin Dentin is a robotic alien celebrity who turns up unexpectedly in your living room on a mission to make you happy or kill you trying. He puts on a show and tries to get his human 'guests' to conform to his rigid blueprint of happiness, ostensibly to help them but really to advance his own career.

I won't spoil the plot, but by the end of the show… everybody gets happy.

A rock musical about robotic alien celebrity chat-show therapist. Whose idea was that?

The show began with a group of young theatre makers in 2014. They were devising a piece that was initially a relationship drama […] Kind of bored, I suggested that the miserable couple should have a friend who drops in, sings advice songs and is infuriatingly perfect and well-balanced. I volunteered to play this character, who was given the name Quentin Dentin.

And now Quentin has an album! What can you tell us about it?

The album is 15 songs from the show, performed by the brilliant cast and band from the 2017 production, produced by Paul Garred (co-founder of The Kooks), mastered at Abbey Road and streamed directly to your desktop. This album is by far the best Quentin Dentin product we've made yet, and I think it's a great introduction to the show if you haven't heard it before!

Comparisons have been made to Rocky Horror. But I hear a lot of 80s in there, too. . . Gary Numan’s Are ‘Friends’ Electric, for instance?

80s British pop has always been the foundation of the show's sound. They’re very declamatory, earnestly relating a pompous lyric or abstract message, kind of tongue-in-cheek: Human League, Heaven 17 and, yes, Gary Numan. It's a tone that suits Quentin's style and message.

The sound on this album is chiefly down to the amazing production work of Paul Garred. Paul was very good at not only finding the right sounds and mixes, but also at paring down the songs and cutting parts in order to make them feel as catchy and poppy as possible. Mickey Howard, who played in pop bands like Latin Quarter throughout the 1980s, [is also on the album].

What about Stairway To Heaven (opening of ‘Too Weak to Refuse’), Heard It Through the Grapevine (‘The Quentin Dentin TV Show’) and a few Hey Jude-y ‘Na Na Na Na’s’ to top it all off?

Yes, well spotted – all intentional references. Although the ‘Na Na Na’s’ in 'All Together Now' are inspired by Blur's 'Charmless Man' – the idea of singing 'Na Na Na' as a way to convey something, or someone, as being literally empty of meaning.

The biggest single influence on The Quentin Dentin Show is definitely the New Wave rock band Devo. If you listen to their lyrics you'll hear the blueprint for a lot of the conceptual ideas in the show. All of Devo's songs and art were based on the notion that technology and consumerism are de-evolving mankind back into babies. Just like in Wall-E.

Most of what they jokingly predicted in the 80s has actually now come true. I took on a lot of their fears and just played them out on stage.

Do you worry about the effect of mass media on your generation?

I think a lot of people my age, and the generation below us, have a very intense, personal relationship with mass media. A lot of people, including myself, have stuff in our ears and screens in our faces all day long.

People with this lifestyle are pretty savvy about what messages they internalise, but it's weird to think that we're the first people in human history to live like this. We can compensate for all sorts of needs with technology, and never need to feel bored or alone.

It's still too early to know what the effect will be. Maybe nothing.

‘Lemons’ is one of my favourite tracks. When life gives you lemons, what’s your ethos?

On the surface the song 'Lemons' contains some decent advice, because Quentin is kind of saying that one should move on from bad things. He's also saying that drugs and denial are excellent palliatives, but whatever…

The point, though, is that in real life there isn't a simple answer for what to do when things go wrong. Accepting Quentin's glib, rhyming solution is dangerous because it simplifies life to a formula.

When life gives me lemons, I usually eat lemons.

Or hit musical with a cult following.

There is a portion of our audience who absolutely love the show, who come to see it over and over across multiple productions. You could call it a cult following. I'm hoping that, with this album, we can reach a whole new audience of potential cultists.

Speaking of cult, would it be fair to say the album takes on a sinister life of its own?

Yes, absolutely. Paul and I wanted to make the album its own experience, [something] a bit different from the show live, so we framed the album as a radio broadcast that gets hijacked by Quentin's magic.

The first song comes out of radio static. By the end, Quentin is switching the radio off and on, taking control of the album and talking directly to the listener.

What’s next for Quentin Dentin and Henry Carpenter?

I feel like there's more to do with this show. We've been developing a new version with an altered plot, double the number of songs – a whole new formula, in fact. It’s a new approach that we think could make Quentin Dentin into a mainstream thing.

But we'll have to wait and see. 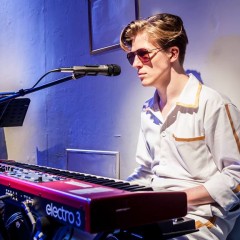