Seductress Ivy Paige speaks to Voice about her new show 'Seduction', and provides comprehensive advice about taking a show up to Edinburgh

Could you first introduce yourself to the reader?
I am the International Show girl Ivy Paige. Stealer of hearts, minds and the occasional wallet! You may recognise me from my recent appearance on ITV’s The Voice where I was on Team Olly, Olly Mur’s team.

Tell us about your show?
My show is called Seduction.
Following in the footsteps of Masters and Mistresses of Seduction that include Casanova, Don Juan and Camila Parker Bowles (!), I will seduce you in an all-out assault on the senses in my brand-new show. Exploring in detail the art of seduction, the games we play, the different types of seducer and how we can use the art of seduction to get what we want. The show is a medley of humour, music, seduction and song.

Why do you want to perform at Edinburgh Festival Fringe, and is it different from other festivals?
There is nothing in the world quite like the Edinburgh Fringe Festival. Being a part of what is quite simply the best arts festival in the world is an absolute privilege. There is no other festival I love more than the fringe. There are thousands of shows day and night and the city is buzzing with energy. It’s a chance to show my work to an international audience and get reviewed by the Industry.

What first motivated you to enter the industry? Who were your inspirations?
Ever since I can remember I have been performing and singing.  Performing and entertaining people is my passion in life. I am inspired by artistes such as Mae West, Bette Midler, Chris Green and I love the humour of the Carry On movies.

Do you ever feel any pressure to be a social commentator, or constantly update material to respond to events?
As artists we are social commentators, I create shows on subjects that inspire me. This year I am inspired by the theme of seduction. As a performer who is synonymous with seducing her audience I wanted to explore and unpick what Seduction actually means. Of course, for me I do this through, comedy, music and song.

Equally, do you feel there has been a shift in public sentiment that has affected your work?
Burlesque is often described as a political act and the recent political climate is bound to have an effect on our audiences. For me how I deal with the current state of the world is to offer my audience an escape from it. An hour of pure entertainment when all else fails I believe laughter is the best way to

Describe the last year in 5 words or less?
Exciting, challenging, exhilarating and fabulous!

What advice would you give to someone who wants to take a show up to the fringe?
Well it’s coming up to that time of the year when the mass exodus of artistes, audiences, producers, journalists, drunks and those going along for the ride descend on a city that has working trams, deep-fried Mars bars and some of my favourite architecture in the world. Everyone knows I usually only play stadiums but if, like me, you’ve decided it would be a good idea to spend thousands of pounds of your hard-earned cash to perform for a few weeks in what is probably a room in a university for the rest of the year then this is my showgirl’s guide to surviving the Edinburgh Fringe.

Cobbled paths and high heels are a dangerous mix. Wear your Louboutins with pride and get taxis.

Never hand out your flyers in bars late at night. Your flyer will invariably end up as a bar mat. A large soaked flyer of your face stuck to the bottom of a glass is hardly the best advert for your show. Instead, invest in some luxury business cards, darling, and get your flyer printed onto the back. That way, whoever you’ve spent the last hour schmoozing gets all your contact details to fit in their wallet. I like to keep mine in a little vintage case.

What goes on in Edinburgh, doesn’t stay in Edinburgh. Social media means that what goes on in Edinburgh, everyone else will know about within seconds. Of course, all publicity is good publicity so get ahead of the game and start some salacious self-serving rumours before you leave. I have already started a few of my own, for example: you-know-who has been seen at all of Ivy Paige’s shows, Ivy Paige is up for an award, Ivy Paige has just been cast in a Hollywood movie etc etc.

Smoking may be bad for your health but it may be good for your career. If that producer you’ve been talking with asks you for a cigarette, it may give you five minutes of precious alone time with them or, on the other hand, they could be trying to escape from you. It may well be the latter.

Prepare to flyer like you’ve never flyered before. Not everyone will have legions of minions to hand out their flyers like yours truly so I advise carefully planning your flyering strategies. I suggest avoiding the swarms of over-enthusiastic drama students on the Royal Mile who are so happy one can only assume they on MDNA. Instead, go through the Fringe brochure, identify similar shows and go exit flyer their audiences. Failing that I find that high heels, stockings, red lipstick and a pushup bra are more than enough to entice an audience in (this goes for the boys too).

Pack a rain mac, even a cheap one or something from last season. Regardless of how talented and beautiful you are, it will rain at some point and you will get wet so some kind of protection is advised. Which reminds me…

And what advice do you wish you’d been given when entering the industry?
Always trust your gut instinct! I am a firm believer in that if you work hard and want it enough then nothing is impossible. The only limits we set in life are the ones we set ourselves.

When and where can people see your show?
10.40pm The Bubble, St George’s Square, Assembly
1-26th August 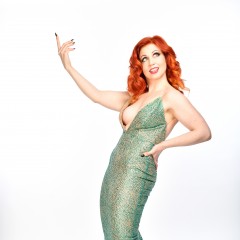 Seductress Ivy Paige speaks to Voice about her new show 'Seduction', and provides comprehensive advice about taking a show up to Edinburgh