We speak to Word of Mouth Theatre, whose show Lippy made it onto the shortlist for Voice's Best Newcomer to Brighton Fringe 2018!

We are Word of Mouth Theatre. I am Rachel Causer, the writer and performer of Lippy, Robyn Bennett is our producer and our director is Georgie Staight. Myself and Robyn met at Royal Holloway where we were both studying Drama and we then met Georgie while she was completing an MA in Directing at Mountview Academy of Theatre Arts. We decided to come together to develop Lippy as we all have a drive to create female-led theatre, focusing particularly on work with a clear social conscience.

Lippy is a semi-autobiographical one-woman lip-sync show about the words we choose to say. Loosely based on my experience of growing up, the character of ‘Rachel’ goes back through ten years of memories in order to discover why she feels that she over-relies on the influence of her favourite funny women when interacting with people in everyday life. Each memory of something that has been said to her is accompanied by a clip of a funny woman that Rachel lip-syncs to and the further back we go, the more detrimental the memories become and we begin to see why she needed these funny women in the first place. The show is a comedic look at the experience of growing up female today and the ways in which humour can help to soften the blow of things such as feelings of isolation and body insecurities. Lippy is also a love letter to the funny women that I admired growing up and why they are vital as role models for girls and women today.

Why did you decide to perform at Brighton Fringe?

We decided to perform at Brighton Fringe this year because we had all seen shows there previously and had been really impressed with the quality of the work that was programmed as well as the supportive and inclusive atmosphere of Brighton in general. It’s a really lovely community of exciting artists and creatives whilst also being an affordable way to get your work on. We had also been specifically following the work of Otherplace as a company, and we really wanted to be a part of the vibrant atmosphere at The Warren.

What was the writing process for the show like?

I have been writing a version of Lippy for almost 2 years. I began experimenting with lip-sync when I was at drama school as a way of ‘getting out of my head’ and into my body – something that you are often asked to do in order to properly play with the text you are exploring. Since then, I have been developing it with the help of many fantastic females along the way, including a scratch version being programmed as a part of the Maiden Speech Festival last year. However, re-writing the piece for the Brighton Fringe has been a really enjoyable experience as I feel that I am beginning to find my stride as a writer. This is something that I think can only come from presenting your work, learning what does and doesn’t work on stage, and then adapting. It’s also been a real pleasure to re-visit my own experiences, hearing about the experiences of other women and working them into a script so as to make the work as inclusive as possible.

Where do you generally take inspiration from when writing?

I generally take inspiration from things that I see happening, things that I have witnessed or experienced first-hand, but I always try to play around with form and to expand the world of that experience so that it doesn’t become too insular. I also try to write about things that I would really like to see myself. Again however, this is a confidence that only comes with time as when you first begin writing, it can be easy to think ‘Oh no one will care about that’ and to block yourself. I am starting to realise now that, more often than not, people will relate to each other’s work in ways that you couldn’t possibly predict, which is what makes it so exciting.

When did you first get into performance? Was it something you always wanted to do?

I first began performing at quite a young age with my mum diligently taking me to the many, many poetry and prose competitions that I would want to be submitted to. I would often write my own poems, some of which are best left in the past, but I think I’ve always enjoyed the process of writing and performing my own work. I then went on to study English and Drama at BA then Acting at MA level where I really began to consider theatre-making as a tangible career.

Has the show undergone any changes while at Brighton, based on audience response?

Since its inception, the show has been gradually developing based on audience response and feedback. It was really important to us to use previous performances and scratches to make the show the best it could be. However, as the show was mostly audio based, with the character of Rachel usually being heard as a voiceover whilst the onstage Rachel reacted and lip-synced, the show was actually very hard to change once we had begun this specific run. In order to keep the show fresh and exciting, we focused on the sections of audience interaction during the lip-synced clips of the female comedians where I was able to gauge the reaction each night as to where the funniest beats were and how to best elevate them in that space.

Do you, or have you had, a career outside of the creative industry?

Like a lot of creatives I know, I currently support my theatrical work by having part-time work. For me, this is split between leading drama workshops for children and office work. This can often be a bit of a juggling act but it is another reason why festivals such as the Brighton Fringe and companies like Otherplace are so important, having low financial risk and excellent facilities for emerging artists.

What changes would you like to see in the industry?

Ideally, there would be more opportunities for emerging artists to become involved in the arts without necessarily having to pay the high fees for drama schools or having to spend thousands on hiring a space to produce their own work. I also think there needs to be a concerted effort on the inclusion of female, BAME and LGBTQU+ creatives as well as people of different classes and abilities to ensure that the stories we are seeing commercially aren’t all from one point of view. All of this seems to be moving in the right direction which is fantastic, but there is room for improvement.

Otherplace are a great example of how this can be done, and we have been so pleased to see the levels of support and inclusion that they provide to their artists. Publications such as Voice Magazine are also vital to new artists as it can often be difficult to gain momentum with your work without diverse media support.

If you could send a message to your 16-year old self, what would it be?

So, I would probably say ‘You don’t need to worry so much’

As we have all thoroughly enjoyed ourselves and this experience, we believe that there is scope for Lippy to be developed for another run later down the line. The nature of the piece means that it can be adapted and re-thought so as best to fit the comedians and role models of the time. In the meantime, however, Word of Mouth are currently all busy with projects of their own. Robyn has just landed a brilliant role as Assistant Producer with NYMT and Georgie is currently in rehearsal with Paper Creatures Theatre Company to bring their show ‘Section 2’ to the Bunker Theatre from the 11th June – 7th of July. I am currently developing Lippy further and I am in the process of writing a new play for development throughout the year.

Where can people find out more?

I am in the process of creating a proper website for myself and Word of Mouth theatre as whole but for now if people would like to follow me on twitter then my handle is @rachelcauser where I will be announcing any upcoming projects.

Georgie’s work can be found at either - www.fluxtheatre.com (where she is a joint Artistic Director) or

www.papercreatures.net (where she is an Artistic Associate) 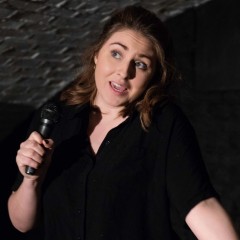 We speak to Word of Mouth Theatre, whose show Lippy made it onto the shortlist for Voice's Best Newcomer to Brighton Fringe 2018!