Martin Dockery and Vanessa Quesnelle take some time to talk to Voice about Moonlight after Midnight, inspirations, and give advice to young people.

Based out of Brooklyn, NY, we are an American and a Canadian couple who met at the London Fringe (London, Ontario) in 2010 and have been touring our own original work ever since. We've written and performed five shows across the US, Canadian, and Australian fringe circuits, as well as, at some point, actually getting married along the way. Our theatre company is called Concrete Drops.

Moonlight After Midnight is a two-person love story about a couple who meet in a hotel room, and the role-playing in which they then engage. Nothing, though, is as it seems, not in the story, the relationship, nor the room in which they've met. The show is a puzzle for the audience to solve as it plays with time and space, offering multiple layers of reality that play out concurrently. We have been touring this show since 2014, and have had runs at 10 different fringe festivals. It's won the top critic's prizes at fringes in Orlando, Ottawa, Cincinnati, Vancouver, and Adelaide, Australia, as well as being the Critic's Pick in a whole lot of diverse newspapers.

I first found myself at the Edinburgh Fringe in 1991, purely by accident, as an American university student traveling Europe. I was blown away by the energy and enthusiasm for live theatrical performance that crackled out of every nook and cranny in Edinburgh. Since then I've gotten an MFA in playwriting and toured 13 original shows across the North American and Australian fringe circuits. It's always been my intention to return to the mother ship, so to speak. And so, after bringing Moonlight After Moonlight to the largest fringes in North America and Australia (where it won the top weekly theatre award), it's finally time to bring our creation to the largest & oldest fringe on the planet.

I've been touring fringe festivals as a full-time gig since 2009, traveling 7 months of the year each year. All which is to say, I've seen festivals in all their shapes, colors, and sizes (even performing at a two-day fest in Virginia that ran on a Sunday and Monday during a weekend that was NOT a holiday.) Most festivals are small enough that patrons can wrap their heads around what's on offer. You'll hear about the same good shows again & again. But in Edinburgh, the fest is so big that amazing shows can easily be lost in the shuffle if they're not mindful of promotion & marketing. As such, every aspect of your production – and not just the performance itself – must be clear-minded, and organized in its approach. So much more work, time, and emotional energy goes into putting on a production at Edinburgh. But the good thing is that EVERYONE is going through the exact same emotional & financial rollercoaster, no matter how big or small their show is, and so there's great camaraderie in that.

Undoubtedly, the fringe has gotten ever bigger since I was first here in 1991. At the same time, though, its size has always seemed unfathomably huge. Since then, almost all of my fringe experience has been with the North American circuit, and so rather than speaking to the difference between fringes over time, I can speak to how they differ across the ocean. Primarily, fringes in North America are much smaller and focus more on theatrical stories, as opposed to stand-up comedy. They cost much less to participate in, but they don't offer performers much of a platform beyond the festival itself. At the Edinburgh Fringe it may be possible to book a run of one's show beyond the confines of the fest itself.

When I started performing at fringes in 2009, I'd never been to a fringe, nor did I know anyone who'd ever performed at one. I didn't have anyone who inspired me; I was just looking for an opportunity to perform my own work on my terms. The fringe is unique in that there are no artistic directors acting as cultural gatekeepers. What you see on stage is straight from the hearts and minds of the performers.

It's hard to imagine what else I'd be doing since I've never had a permanent job in the fifteen years before I started performing at fringe festivals full-time. All I ever did was work at temp jobs. "Temporary" is half the job description, and that always fit me perfectly. In everything I've ever done, including my shows, there has always been a sense that it is only happening in the here and now. And so, I don't know what I'd be doing, but it's essential nature would be ephemeral.

I'd have the job I have right now – which is being a performer who writes his own material.

In pre-school, they used to give us paintbrushes and buckets of water, and we would "paint" the side of the school. I was always taken by how our work would slowly disappear, as if by magic. Would we be able to paint the whole wall before our work evaporated? Everything about it was fleeting and temporary, as well as magical and absurd.

No. In fact, I don't want my work to be a product of its time. There are never any pop-cultural or political references in my shows. Rather, the work should feel timeless, and be as relevant to people today as much as in twenty years.

No. My work is about our relationships to those we love, and not about social events from the news.

Harold Pinter. I love the restraint in his writing. His use of silence, of pauses is endlessly fascinating to me, and I'd like to explore the worlds he creates even further.

It is incredibly expensive to perform in a ticketed venue. Our play, though, needs to happen in a controlled space. It is an intimate experience, our show, one that needs at least a modicum of silence and lighting, as well as people to moderate the flow of audiences in and out of the venue. It would spoil the atmosphere of the play if we had to be doing that ourselves. The free venues work best for stand-up comedians, or performances in which there's no fourth wall. Our play would be terrible in the back room of a bar, with people walking in and out.

Know exactly what you're hoping to achieve by bringing a show to the fringe, and then invest accordingly. It's totally valid to do a show purely for the sake of being part of the crazy marketplace that is the Ed Fringe with its 3400 shows. If you're just looking for a good time, then don't spend money on producers, publicists, or high-profile venues. If, though, you're hoping to get something tour-wise or review-wise out of it all, then consider spending (and losing) a good chunk of change.

We'll be performing Moonlight After Midnight nearly every day in August at 3pm in The Box at Assembly in St. George's Square for tickets go to www.edfringe.com

Moonlight After Midnight is performing at Assembly George Square Theatre at 15:00 on 3rd – 28th (not 9th or 16th). For tickets and more information visit the Ed Fringe website. 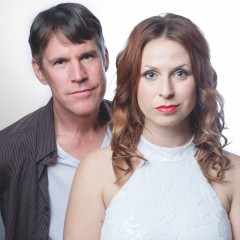 Martin Dockery and Vanessa Quesnelle take some time to talk to Voice about Moonlight after Midnight, inspirations, and give advice to young people.