Dylan Cole takes some time to talk to Voice about the show, inspirations, and to give advice to young people.

Blank Tiles is a solo theatre show about a former SCRABBLE world champion recently diagnosed with Alzheimer's disease. The show sees the character desperately try to document his memories before he loses them forever. You'll laugh, you'll cry, it will change your life.

It's the biggest arts festival in the world and I finally have a show that is good enough to do well there, that can stand out from thousands of others.

One thing is for sure - it certainly gets bigger… Next year I'll be playing in a venue at John O'Groats, thank you very much.

I told a dirty joke at a Christening. I was hooked from that moment on. Every artist at every festival I do inspires me to keep doing shows. You see so many shows, so much talent, so many ideas. It's impossible not to feed off all that creative energy.

I don't have a job… I left my job and my country to do this festival. That's how much I care. Come September, I don't know what I'll do. Do you have a job for me? Give me a job.

I think an astronaut would be pretty cool. Oh… IN the world, an astronaut is pretty boring on the ground. Um, I would like to try a lot of jobs for a few months at a time then quit. Train driver, maths genius, elite Olympian etc.

I think you need to be relevant. But no, I don't feel that pressure. I write a show to entertain. It might end up having some sought of profound social commentary but I don't set out to do that. If I tried to do that it would end up being cliché and unnecessary. I think I would feel artistically unsatisfied, like I was preaching to the choir. Blank Tiles came about because I wanted to do a show about Scrabble the rest of show came about organically.

It's definitely beneficial to do something that people will like, so perhaps in some way. I think I'm more affected by other artists than audience desires. If artists are doing something different/original, you take note. Similarly if you see artists doing something that you think has become clichéd you make an effort to afford heading in that direction

I'd like to do a show with Meryl Streep playing herself taking an acting class. However it is an alternate reality and she has never made it as a movie star, but instead is a bitter teacher. She's still alive. Perhaps I'll give her a call. Anyone know Meryl's number?

Blank Tiles is performing at Assembly George Square Studios at 1555 on 3rd – 28th (not 14th). For tickets and more information visit the Ed Fringe website. 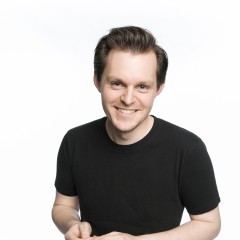 Dylan Cole takes some time to talk to Voice about the show, inspirations, and to give advice to young people.