Voice MagInterviewsWant my job? with cr…

"It’s ok and necessary to fail at things. There is nothing wrong with failure."

My name is Khutina Griffiths and I’m a Creative Designer and Art Director who work as Head of Design at The Elephant Room.

What does your job involve? What happens on a typical day?

No two days are the same. I’m hands-on and jump around the many stages of the process. Some days I’m moodboarding art direction, other days I’m designing lock-ups, other days I’m creating wireframes for websites, and other days I'm on shoots or visiting venues for events.

What’s great about what you do?

The variety and the ability to experiment, expanding on ideas in a way that seems to resonate with other people and with who I am.

What are the toughest parts of your job?

Apart from lack of time, it’s almost the same thing that’s great about it. There are so many ways to do something it can become overwhelming. Expanding on something usually means doing it for the first time so it can be hard to get people on board, especially in the early stages if it’s unrecognizable to them. But in the end, there’s satisfaction in getting it done.

I loved designing billboards for Channel 4, for which I won a Creative Circle award. Another highlight was early on in my career when I designed Christmas packaging for Nestle. It was the first time I had done something like that and when I saw it in a store it was such an exciting feeling! More recently we did something for Pinterest where we promoted the work of Black content creators and I was able to inject an artistic sensibility into the design work. The results were set up in an exhibit environment for a press launch event which felt really good.

What's been the biggest challenge so far in your career? How did you overcome it?

The biggest challenge has been to stay contemporary. It can be easy to get stuck in a style of design and while some designs are timeless, the world moves on and I think a big part of creativity and design is being aware of what’s going on around you. I overcome it by constantly researching and observing, not just when it’s needed for a project but just every day, on trips to events, on the train, walking down the street, at galleries, shows, graduate shows, anything.

I’ve always leaned into creative expression. I won competitions for painting as a child, took subjects in the humanities, had a printed t-shirt business, and all the usual stuff. If I didn’t have a creative job I volunteered to do things like the internal newsletter or event posters. This meant I had real-life work to put into a portfolio which then landed me my first design job at an agency designing license branded products for movie releases.

I’ve rarely worked outside of the arts. As a young adult, I worked in retail a lot and had multiple jobs at one time, but again I always offered to help dress the windows, do the visual merchandising staff party invites, anything! So even if the job wasn’t creative I would find a way to make it so.

Have you noticed any changes in the industry in recent times? If so, what?

The commercialisation and cultural capital of being thought of as a creative has produced a voracious appetite for it amongst brands and consumers. On one hand, it has meant lower budgets, less time, and other pressures but it has also democratized the industry so there are wider ideas of what is acceptable, good, or possible and it means that more people from varied backgrounds are now part of the industry. This was not the case when I first started.

It’s hard to say because it’s just a part of who I am. Art was celebrated in my background as cultural leisure, but not seen as a typical industry for a Black woman to go into. My mother still has books that I used to scribble in and pictures of me dressing up in her party clothes. It was such a strong thing inside me I couldn’t imagine doing anything else - I would have found some way to inject it into the environment. I think if I was supported more early on I would be a better designer, but who knows!

It’s ok and necessary to fail at things. There is nothing wrong with failure. Pick your friends wisely, they will shape the person you grew into and the community you end up being a part of as an adult.

Don’t listen too much to people! I was discouraged from learning languages ‘because most places speak English anyway’, playing piano ‘because I had fat fingers’, traveling ‘because it was dangerous’, working in an artistic job ‘because I wouldn't make any money’ …and so on. You know what you want for yourself, and even if you don’t you’ll be ok the world will eventually reveal itself to you in the way things feel.

Do you have any advice for young people interested in your field?

Much the same as the last question, don’t worry about failing. If an environment punishes you or makes you feel bad for getting something wrong, keep on moving until you find somewhere more supportive.

Find that community of people who are interested in similar things and make them your social group so you can collaborate and support each other. Take on passion projects, go out and take in all the content the world has to offer even if you don’t fully understand it, practice your craft and keep at it.

As much as I talk about community, it’s also OK to do stuff by yourself and that will probably keep you going as a designer. Sometimes you want all the opinions and other times you just want to put on your headphones and get there yourself, it’s a balance.

Nowadays networking feels like such a big thing, connecting with people on social media, Linkedin, etc… I’m terrible at it though! I think again I would be more successful and have more opportunities if I were better at networking.

Where can people find you and your work online? 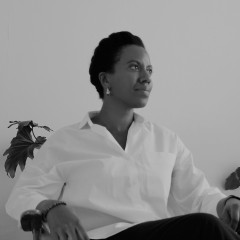 "It’s ok and necessary to fail at things. There is nothing wrong with failure."