"We had a huge launch thanks to a MacWorld article that heralded that the “Gay Netflix” had arrived."

For those of us who aren't as widely represented in the media, be it because of our skin colour, sexual orientation, or gender, we know how harmful the lack of representation or misrepresentation can be. Being represented is an integral part of how a person sees themselves, and having to rely on the often one-dimensional offerings of mainstream media is no longer something people have to sit back and endure.

One person making their contribution to the ongoing fight for LGBTQ+ visibility in the media and society is Christopher J Rodriguez, creator of Revry, a simple yet genius idea, letting LGBTQ+ people far and wide know that if you're not invited to the table, sit at your own. As one of the four pioneering co-founders of Revry, the world's first (and largest) LGBTQ+ streaming service, Christopher talks us through the six-year journey that has put Revry on the map and reminds everyone that Pride is not confined to the month of June.

Can you introduce yourself and tell us about your creative background?

Hey there! My name is Christopher J Rodriguez, Esq. I’m the Chief Business Officer and one of four amazing co-founders of Revry. I’m an attorney with a background in entertainment law. Previously I worked at Original Productions, working on reality shows like Storage Wars, The Deadliest Catch, and Jay Leno’s Garage. After that, I was the show attorney for Shark Tank and The People’s Choice Awards at United Artist/MGM. I met my co-founder, Alia Daniels, at law school. Damian Pelliccione is my husband and we’ve known each other for 15 years. We connected with LaShawn McGhee when the three of us did one of our first productions in 2014.

Can you tell us what Revry is and how the idea came about?

Revry is the world’s first (and largest) LGBTQ+ streaming network. Unlike many other streamers in the space, Revry’s primary distribution is through linear FAST channels – think old-school live TV except truly free. The idea came about when I broke my iPhone in the fall of 2015. Damian and I were in Vegas and decided to stop by the Apple Store to fix my phone. He had recently watched the Apple Keynote where the new open source tvOS had just been announced for the 4th generation Apple TV. While I was fixing my iPhone, Damian took the opportunity to play around with the new Apple TV. Fully expecting to find something like Revry, he searched LGBT, and it came up with nothing. That’s when the lightbulb went off in our heads.

Once you had the idea, what were the next steps in creating this streaming service?

The next step was securing a founding team. Once Alia and LaShawn joined Damian and I, we hit the ground running. We began forming a business – brainstorming a name, creating a business model, and finding a developer.

How has Revry been received since its release in 2016?

We had a huge launch thanks to a MacWorld article that heralded that the “Gay Netflix” had arrived. Initially, it was trial and error, but once we shifted to a focus on linear FAST distribution and started working directly with advertisers, our path to success was set. Now we’re making content for McDonald’s and Lexus and just premiered our highest-rated and watched show ever with our first drag competition series, the Spanish-language, Drag Latina.

2016 was not that long ago, but there is always a lot of backlash when it comes to the fight for LGBTQIA+ representation. Did you face any obstacles trying to get Revry off the ground?

Revry is a global streaming service, so how have other countries received it outside of the US?

Very well. We underestimate how far ahead the US is in terms of the fight for LGBTQ+ equality – many other countries are not so far along. This makes the offering of Revry so impactful in these regions. Plus, many other countries embrace queer culture (regardless of that country’s politics). Some of our biggest viewership is in Latin America with our Spanish-language and Portuguese-language FAST channels, Revry LatinX, and Revry Brazil.

How do you think Revry will or has helped tackle performative politics?

That is an interesting question. If you’re talking about the problem of “rainbow washing” (i.e., deference to the LGBTQ+ equality cause ONLY during Pride when it’s popular to show such support), I’d say we do quite a lot. We champion the message of Pride 365: we’re always here and always queer voting, consuming, living, loving, and enjoying entertainment all year round. We have a unique position of being able to work with brands to help educate and advance this cause which we believe makes the world a better place.

Championing diversity is a huge part of Revry’s mission. Tell us some of how you ensure you’re representing all of the LGBTQIA+ community?

First off, it is invaluable that Revry was founded by an authentically assembled team of truly diverse individuals. Our founding team is 75% queer, 75% POC, 50% women of colour, and 50% non-binary. This ethos naturally has trickled down into how we do business, who we do business with, and what type of entertainment we choose to put out into the world. Just look at our tentpole original, House of Pride. From talent to behind-the-scenes, you will not see a more genuinely inclusive community. Another way that Revry can ensure wide representation is through our multiple live FAST channels. Having more than one allows us to create a type of Queer Cable TV: multiple channels all highlighting a different aspect of our experience or group. We have Revry Her, Revry News, Revry LatinX, and Revry Brazil to name a few. This allows us to celebrate those differences along with our similarities.

How do you decide on the programming Revry streams?

Data doesn’t lie and one of the great things about a digital-born TV network is we have plenty of data. We can program a show and get immediate feedback on how it performs. Other than that, we use our longstanding relationships with independent filmmakers, film festivals, and distributors to source the best content that reflects, both, our vibe as a queer network and the tastes of our audience.

What’s a favourite show you stream?

While I LOVED The QueerX Awards this year and House of Pride is always a blast, currently my favourite show is Drag Latina. It’s such a fresh take on the reality competition format and rather than leaning into negativity, it has such a big heart!

Six years into your mission of sharing the stories that deserve to be told, what has been a highlight for you so far?

In 2020, President Biden used the platform of our award show, The QueerX Awards, to address the LGBTQ+ community three weeks before the election that put him in office. It was a surreal moment to have created a platform that is being used by such an important global figure.

What is next for Revry and the team?

To quote Madonna, “to rule the world!” No, but seriously, I can’t wait to truly expand the Revry brand throughout the US and into the world and really solidify ourselves as the global destination for unapologetic queer TV.

You can find me @chrisesq on LinkedIn or @crexx83 on Instagram.

Check out the finale of Drag Latina on Sunday, November 20, 2022…only on Revry!

Revry is available to stream in the UK. 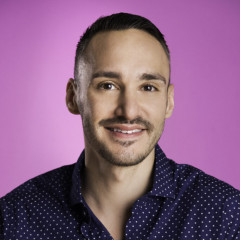