"It’s silly, sincere and heartfelt... My show is for the Ali from 2018 that didn’t know how to cope. I’d like to think if I had seen this show back then, I would have made some different decisions."

Hi, I’m Ali Brice. Thanks for taking the time to read this. I’m a comedian and actor. What have I been in? You may recognise me from some adverts. I’ve also popped up very briefly on the BBC and Channel 4.

But mostly I do stand-up comedy. Performing live is my favourite thing!

It’s silly, sincere and heartfelt. A few years ago, I was in a very bad place and tried to end it all. I’m now in a much better place thanks, mostly, to two years of therapy.

My show is for the Ali from 2018 that didn’t know how to cope. I’d like to think if I had seen this show back then, I would have made some different decisions.

I have had a few tweets, emails and messages from people that saw the show in previews and said they related to it. I’ve been told it is cathartic, uplifting, beautiful, silly and, most importantly, funny.

I set out with the hope the hope that it might help one person. I believe I have achieved that, so the fringe is just a lovely fun bonus!

I love the Fringe. I love performing. I love hanging out with performers.

Performing can, at times, be quite lonely. But at the Fringe, you are surrounded by performers day in, day out for three weeks. It’s awesome. And on top of that, I get to do my favourite thing every day. Double awesome!

It’s massive. Absolutely huge. And goes on for ages.

I fell in love with stand-up comedy at an early age. Some people find music, or football, or painting…whatever their ‘thing’ is. I saw Ken Dodd on the TV and was transfixed.  I found it mesmerising.

It wasn’t a conscious choice to ‘enter the industry’. I just started doing the thing I love.

My comedy is comedy created from devotion - not ambition, not for fame.

I found comedy via my dad who loved The Goons, Monty Python, Pete and Dud and listens to all the comedy on Radio 4. My family are also really funny – so there was always laughter when I was growing up.

I’m not sure that my education has had an impact. I guess it instilled a confidence in me that I can do whatever I put my mind to – my school just hoped that would be getting into Oxbridge and making loads of money. A career in the arts wasn’t presented as a realistic option.

However, there has never been any barrier to me doing comedy. I just started doing it. Well, I met Adam Larter at University in Kingston where we were both studying creative writing. We both had a shared love of weird comedy and started doing open mic nights together.

Adam is probably the biggest impact on my comedy career – without him, I don’t think I would have got on stage.

I remember my Dad holding me in his arms while someone took a photo. It was in my childhood home at a party my parents were hosting. We were in the dining room.

Applying for jobs, I suppose.

No. I didn’t do anything creative in lockdown and enjoyed having the time off. It meant when I came back to it, I had a fresh head and new energy!

No. But it’s also more complicated than that and not something I can really answer fully in an interview like this.

I would work with my younger self and tell him to not worry so much, that confidence is essentially an illusion and that he should do what he wants more often and follow his dreams.

Do it. Just do it. And have fun. Enjoy yourself – anything else is a bonus!

I am @TwiceBriceBrice on all social media – please say hello! 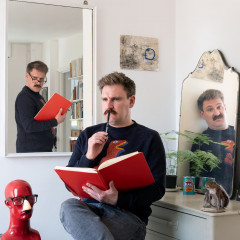 "It’s silly, sincere and heartfelt... My show is for the Ali from 2018 that didn’t know how to cope. I’d like to think if I had seen this show back then, I would have made some different decisions."