"We spend so much time overthinking everything. You don’t need permission, or an agent or a big flashy stage - you can literally perform in a toilet at the Edinburgh Fringe. Ask yourself what’s stopping you and go for it."

Hey babes, I’m James Barr. A comedian, radio host and in the words of Piers Morgan ‘a wokey that talks like he runs the world’ - love that for me. Thanks hun.

People keep telling me to be less gay, ‘Straight Jokes’ is my fabulous reply. It’s an hour of non-stop jokes about my boyfriend, my ex-employers and also James Corden. Ultimately, it’s a battle cry to be yourself - I’m fed up with the world telling us who to be and I wanted to make everyone feel good about who they are.

I’m such a huge fan of comedy and a lot of the comedians I look up to have played the fringe, it’s an absolute privilege to be able to do the same.

The energy, the chaos. There’s nothing like it. I love getting to live in Edinburgh for a month. Plus compared to other festivals, there’s a lot more fudge.

I’ve always been funny presenting on the radio but some of my more boring bosses had told me not to ‘shriek’ or sound ‘less camp’ on air. When I’m performing comedy, I’m free. I love making audiences laugh, it’s so joyful to watch their whole face change. I’ve always wanted to make people happy. Russell Howard is a huge inspiration; his comedy is kind but hilarious.

Growing up gay can feel really isolating. I think feeling that alone as a kid made me seek acceptance from the people around me and working in radio felt like the quickest way to achieve that. My dream quickly became a nightmare when my ex-radio bosses told me to “be less camp”. This has had a profound impact on the way I perceive myself and made me determined to be the complete opposite…  The most camp and fabulous comedian in all the land.

What is your earliest childhood art memory?
My sister and I used to pretend we were on television by sitting inside a cardboard box. We did so many shows for our Mum, including a critically acclaimed dance interpretation of Louise’s hit single ‘Naked’, in which we took our clothes off for our Mum and her friend Paula.

I think we are all a lot more honest about what we want, and I wanted my new show to be as fun and funny as possible! We’re here for a good time, not a long time - my show doesn’t hang around.

Be yourself, everyone else's awful

I think you should be cancelled for asking. Haha. Firstly, is cancel culture even real? Jimmy Carr made a joke about murdering gypsies recently and he’s still touring. It’s more of an ‘accountability culture’ if anything and I think that’s a hugely important thing for the progression of society. Secondly, I think yes, comedians should have the freedom to poke fun at whoever they want - but no one should be exempt from a clapback.

If you could work with anybody, from any point in history, who would you pick and why?
Freddie Mercury, just so I could look at him.

Do it now! We spend so much time overthinking everything. You don’t need permission, or an agent or a big flashy stage - you can literally perform in a toilet at the Edinburgh Fringe. Ask yourself what’s stopping you and go for it.

I’m at Underbelly, Bristo Square at 8:45PM every day from 3-29th August

See James Barr: Straight Jokes at the Underbelly during the Edinburgh Festival Fringe from 3-29 August. For more information and tickets visit www.edfringe.com or www.underbelly.com.uk 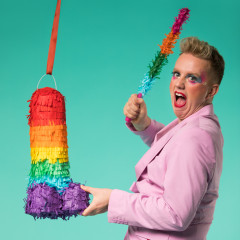 "We spend so much time overthinking everything. You don’t need permission, or an agent or a big flashy stage - you can literally perform in a toilet at the Edinburgh Fringe. Ask yourself what’s stopping you and go for it."