Basil Brush is back at Edinburgh Festival Fringe this August with two shows – one for families, and one very much for the grown-ups.

People often announce me on stage by saying 'He's a fox who needs no introduction'....So do I need to ? Ha ! Ha ! Boom Boom! Oh alright, I'm Basil Brush, ginger, there's a lots of Scottish on me, the only talking fox on the box, been around for 60 years but I still have my own teeth...In jar by the bed....I'm only little, 18 inches tall, but at least its not winter cos, when you're 18 inches tall and walking in 6 inches of snow it gives a whole new meaning to the phrase 'cold snap' Ha! ha!  Thrilled the festival is in August

Our show Unleashed and uncut is Graham Norton, meets Have I got news for you, meets Crackerjack! It's for the grown up audience, who want my naughtiness mixed in with wit, humour, and a hint of nostalgia! But defibrillators are on standby for those from my early days in case it's too much for them.

The fringe is perfect to try stuff out with an audience that is up for a good time, wants to let their hair down, those that still have it, and have come to the fringe to have a laugh!

It's the biggest creative festival in the world and there is so much for everyone, everywhere at any time of day in any sort of building. Totally unique and it's in one of the best cities in the world – Edinburgh!

People say I was born on stage, folks liked it so much my mum kept it in the act. But my inspiration was Terry Thomas… so classy, so suave… so naughty… so charming… sums me up really 'Hellllllooooooooo!' as Terry would say.

At school I was good at woodwork, I used to say I would do that, but couldn't be bothered. I just dreamt of being on stage and entertaining  and having fun with a mister!... leave it.

I can’t remember my earliest childhood art because I can’t remember that far back. I'm 60 in human years, imagine what that is in fox years! I am sure it was a squiggle of some sort, I was terrible at drawing because the pens slipped through my paws. So, I just stuck to drawing curtains. But I went to the theatre to watch pantomime and was hooked from the moment the audience got involved. I love audience participation!

If I wasn't an acting fox I'd probably be a bin man, cos we foxes love being around bins… or so you humans think…

COVID made me a more flexible fox in terms of doing things online when needed but it made me and other performers realise how much we love performing. And I think the audiences realised how much they miss live shows now that we are back out there.

If you are coming up to the fringe, come to enjoy yourself, let yourself go and embrace the whole experience! There is so much to learn, love and appreciate as well as performing. I sound like a life coach...next bus...the 652 to morningside.

We are in the Debating Hall at Gilded Balloon. 12:30pm with our family show and 6:30pm with unleashed and uncut for grown ups!

We are online at basilbrush.com

If they visit celebvm or cameo I can do birthday messages for anyone who would like them as well! BOOM BOOM to you all the ginge is back on the fringe 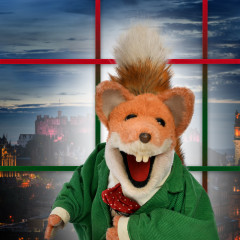 Basil Brush is back at Edinburgh Festival Fringe this August with two shows – one for families, and one very much for the grown-ups.