"My workshop is my second happiest place after the stage. Although I must remember to wear gloves. I’ve had too many injuries and I kind of need my fingers."

My name’s Jon Courtenay. I was the winner of Britain’s Got Talent in 2020. I’m a writer and comedian who sings and plays the piano.

It’s the biggest event of its kind and welcomes all types of performers with any kind of show. I’ve written something a little unusual, so it seems the ideal place to premiere it!

It’s in Scotland, that’s a start. It’s the biggest and the best.

Watching my parents on stage was the beginning then watching people like Fred Astaire, Dudley Moore and Victor Borge. Victor was one-of-a-kind and way ahead of his time. His comedy is timeless, and he was the first person I saw being funny at a piano.

I was an only child and discovered magic when I was very young. Something I could learn on my own. Then I watched Tommy Cooper and wanted to make people laugh using magic rather than perform the big illusions. I started playing the piano around the same time and had a few lessons at school. It was a strict, military boarding school and I was bullied for the first few years as I didn’t really fit in but that just made me more determined to be a success at what I was passionate about… show business. Gradually the magic made way for the music but the comedy remained. It got me through.

The smell of crayons at primary school. Even now at my son’s school, the smell is so evocative. Literally my earliest memory of ‘art’! Then I remember writing a poem when I was about 7 and my teacher didn’t believe I’d written it and told me off for lying. Still hurts to this day. I hope she’s still alive to see my Edinburgh show. The whole performance is a poem, and I DID write it myself.

Anything involving woodwork. My workshop is my second happiest place after the stage. Although I must remember to wear gloves. I’ve had too many injuries and I kind of need my fingers.

It took a while to get used to performing virtual shows and made me appreciate live audiences so much more. Although I miss being able to mute some people!

I don’t agree with cancel culture full stop. Freedom of speech and freedom of expression is so important. If you don’t like what someone is saying or doing, don’t watch or don’t listen, or even better do watch and listen and then get involved in the discussion. Everyone has something to contribute, good or bad, and it can all lead to healthy debate and conversation although social media often makes it pretty unhealthy.

Cole Porter. His music and lyrics are absolute genius and he knew how to party. That era of sophistication combined with unrivalled debauchery, must have been a blast. Modern celebrity today is tainted by social media. No one can get away with anything!

Get it ready before you get there. It’s such a huge opportunity and too many people try and perform something that’s not ready. Work it all out before you go, preview it with audiences and don’t be afraid to tweak it. Then when you’re happy with it, hold your head high, be proud of it and don’t listen to the critics.

I’m only in Edinburgh for the first 2 weeks so be quick! 3-14th August at The Gilded Balloon Museum Theatre. 6.30pm every day. 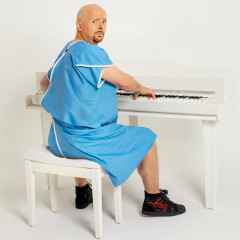 "My workshop is my second happiest place after the stage. Although I must remember to wear gloves. I’ve had too many injuries and I kind of need my fingers."