It’s kind of a rite of passage. It’s also an incredible opportunity to be seen by an international crowd. It’s like a comedy tradeshow, I guess. Which makes it sound corporate? But I guess it is. If you do a good show up there…it can change your life!"

Hello my name is Rich Hardisty! I am a stand-up comedian.

In a nutshell, it’s about my SILLY life and my SILLY brain and why I am the way I am, the things I’ve gone through and what I've learned from those experiences that I think might be of some value. I also wanted to make people FEEL what it’s like to be me. (I’ve had quite an extraordinary life!)

The show is about how my brain/mental illness affects me and all of the strange funny situations I've landed in because of it. I hope people don’t go “sigh mental health” because I promise it will not be like anything you’ve seen before. The reactions have honestly blown my mind!

My aim was to talk about some of the darkest parts of my life but make it as funny and silly and joyous as possible… and from the reactions so far I appear to have succeeded – but I guess you’ll be the judge :)

If you like to laugh and feel feelings you should come.

Simon Amstell said it's "Much more than funny... but also very funny" …so that was nice!

Well firstly all my heroes have done it, it’s kind of a rite of passage. It’s also an incredible opportunity to be seen by an international crowd. It’s like a comedy tradeshow, I guess. Which makes it sound corporate? But I guess it is. It’s a great opportunity to be noticed. If you do a good show up there…it can change your life!

I am also looking forward to being up there with all the other comics, The buzz of it all and the community :)

The sheer size and scale of it. The fact it takes over a whole city for a month.

And people really seem to pay attention to the art that comes out of it!

It’s like saying what differentiates the Oscars from every other film award….it’s just “the one”.

It’s the one people seem to really recognise and care about. Not everyone obviously. Some people don’t care about it at all :)

Hmmm.. what motivated me? Well, I left school with no GCSEs, I am not good at being told what to do, but I have always been funny. "And one day I realised that a lot of comedians on the telly who I admired were a bit unhinged and made a lot of money, so I just thought “I'm a bit unhinged....I'll just do that…I've got nothing to lose.”

People who inspire me; I would say Rik Mayall when I was young for the sheer anarchy and childishness, Jim Carey for his physicality, Steve Coogan for his subtle performance and nuance. And lastly Richard Pryor in the way he joked about pain and Flight of the Conchords for their deadpan jokes and naivety.

Well, my background like my family personal life has had a MASSIVE impact on me emotionally/mentally and that is what my show is ALL about….so it has shaped my art directly. Having no money definitely gave me the drive to just keep going, as there was nothing to fall back on. I had no GCSEs and never went to uni…so I was gonna make this work…or die trying.

I never really got an education and I can only really focus or concentrate on things I care about or things I am interested in. So school was a big no no, it just didn't work for my brain.

I was always just messing around being silly and having a laugh and getting kicked out. I just didn't see the big deal in it. I knew whatever I was going to do wasn't gonna be something I would learn at school. All my school reports say “sit down stop being silly” it’s actually hilarious to read. Especially knowing what I do now!

But my mental health has affected my career a lot. I would always get something going/momentum….then I would end up back in hospital under the care of a team again.

And have to start from scratch again. Hard lesson to learn, but a valuable one about resilience. Sometimes you have to just get up and start again!

Jesus, all my memories are childhood memories! My mate, Tom Ward, has always said that my brain just got stuck at about aged 5-8…and never moved on. Like it got jammed there. I quite like that though, I think we can learn a lot from watching children, I think they “get it”. I can’t remember the first memory…but a memory that came to mind lately is that feeling when you go on holiday as a child, and you wake up on the first day and its all hot…and you go to buy some stuff for the beach (bat ‘n’ ball…lilo etc) and that smell of the rubber and plastic of all the toys. Great smell.

Honestly, I don’t know. That’s how dedicated to this I am. Not a clue.

All I know is something where I can “play”.

I mean not really, I suppose after Covid you were more grateful for just a small crowd. After not performing properly for 2 years it was like “YES 12 PEOPLE”!! Haha

Do you subscribe to the idea that art should be exempt from ‘cancel culture?

Wow, this is a controversial topic, such a sensitive issue. I just want everyone to get along. After being in and out of therapy I’ve been able to see how people can believe all sorts of things about themselves or the world….and the only way you change people is through compassion…and talking (that’s what therapy is).

Shaming and shutting people down just doesn't work to change minds. Trust me, I know!

People have to be allowed to have their voice and you should be allowed to oppose it. But not just NOT let them have it and shut it down. That is like “thought prohibition”.….and look how prohibition worked out. Thoughts and ideas will just be forced underground, and that’s dangerous!

This might be obvious but Stephen Spielberg. Just for the sheer buzz of it. I'm sure there are more “cool” people I could pick, but definitely Stephen Spielberg because his movies affected me so much and shaped my personality. So to be in one of his films would just be mental! (insert mind-blown emoji)

Write stuff that YOU REALLY care about. It will shine through, I promise.

See Richard Hardisty: Silly Boy at the Pleasance during the Edinburgh Festival Fringe from 3-29 August. For more information and tickets visit www.edfringe.com or www.pleasance.co.uk 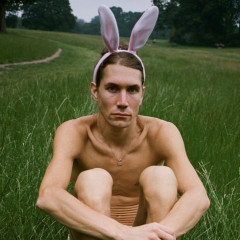 It’s kind of a rite of passage. It’s also an incredible opportunity to be seen by an international crowd. It’s like a comedy tradeshow, I guess. Which makes it sound corporate? But I guess it is. If you do a good show up there…it can change your life!"