Former corporate banker Jamie MacDonald is taking his new show, Reasonably Adjusted, up to Edinburgh this August. We talk about the show, the Fringe more broadly, and his family's favourite Christmas decoration.

Hi there, I’m Jamie MacDonald. I’m a stand-up comedian from Glasgow. I’m a 6,4 middle class white straight male so it’s a good thing I’m blind or I’d be finished in this game.

First of all the show is funny. Got to make sure that’s in place then one can bang on about the deeper meanings. Which mine does have. The flipping New York Times ran a poll. ‘What is the worst thing that could ever happen to you?’ Blind won! Knocked it out the park. Now given that blind people can’t read the bloody paper it’s a bit off. It’s like getting deaf people to vote for their favourite radio show.

In Reasonably Adjusted I set straight the assumption that my blindness is at the core of every decision I ever make. It’s not.  For example people assume it’s because of my eyes I don’t have children. The reason I don’t have children is because I’ve never fancied them…in both senses of the phrase.

I want to perform at the Edinburgh Fringe because I love being praised for working for 1 hour a day for not quite a month. It’s the only time a comedian gets any type of compliment for their work ethic! “You must be exhausted?”

Probably the potential for losing so much money. If your show doesn’t land you’ve 25 nights of empty rooms to look forward to. Nothing like entertaining yet another sparse room knowing you’re down a further 500 quid.

I was working in a corporate bank in London for which I’m eternally sorry. I didn’t enjoy it but probably would never have quit. So thank god for the credit crunch. All the dead wood was made redundant. I’d been moon lighting as an open mic spot in London. So when I found myself out of a job I had 2 choices. Scrabble around with all the other fired folk for a scrap from the banking table or commit to comedy. Knowing I’d get bugger all from the former I committed to the latter. So I suppose then my inspirations for getting into comedy must be disgraced bankers Sir Fred Goodwin and Peter Comings. Thanks lads!

I was a student in St Andrews and then Aberdeen where I read Ancient History and Law respectively. I go about comedy in the same way I went around writing all those essays. In the first instance I’d say this time it’s going to be different. I know I’ve new material to write for a slot 2 months down the line. If I do a bit every day I’ll have loads of new stuff ahead of the gig. Then 2 days before the show I’ll feel sick, eat badly, stay up all night and get everything sorted 2 seconds before the deadline.

My earliest childhood art memory is sadly still in existence. When I was 4 or there abouts I drew a Christmas decoration for my Gran (I could see back then, for more info come see the show). It was a crudely drawn robin and chiming bells medley. The words have a merry Christmas were written along the top. However I went in too big with the lettering of ‘have a‘, meaning poor “Merry Christmas’ was squeezed into the right of the master piece.

The picture remains to this day. My brother loves to hang it up over the festive period.

One of the classic blind guy jobs – bed maker, which I did for a Summer in 2005. I would fasten the material onto the bed bases with a hydraulic staple gun. Lost a lot of blood that Summer which aptly meant I slept very well.

Covid 19 made me realise what a luxury item Governments think comedians are. Literally every industry was opened up before us. We are the cherry on societies cake. Well, the ones that managed not to die of starvation and exposure from not being able to afford food and rent.

Cancel culture is just the name given to the moaning moral megaphone of the online puritan lynch mob. It’s not a real thing. It’s the Bitcoin of modern society. It has no physical base and is only believed in by wankers.

Probably Jesus. He could perform a wee miracle and I’d get my sight back. However, that would probably mean going back to the bank and Jesus didn’t like money men. Conflicted!

Read my previous answers. This type of bitter cynicism awaits all who stick with this game. Also, it’s tonnes of fun!

Jamie MacDonald: Reasonably Adjusted is performing at the Gilded Balloon at 7:45pm from 6th to the 29th August. For tickets and more information visit edfringe.com 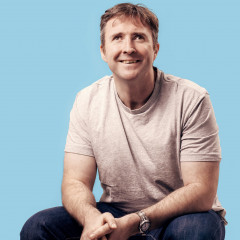 Former corporate banker Jamie MacDonald is taking his new show, Reasonably Adjusted, up to Edinburgh this August. We talk about the show, the Fringe more broadly, and his family's favourite Christmas decoration.