"The Fringe is an emotional rollercoaster at the best of times, and it's easy to overdo it. You quickly get sucked into the Edinburgh bubble of believing what happens on the Fringe is really important, particularly regarding reviews."

Certainly: my name's David Ephgrave, and I'm a comedian, actor and musician who's available for weddings, parties and other social functions, provided they don't contravene any Covid restrictions in place at the time (Boris Johnson, take note).

It's a stand-up show about dealing with loss (I like to keep it light). My dad died of cancer in 2019, a few months before I was due to return to Edinburgh with a new show (which was very inconsiderate of him). His death opened up a Pandora's Box-worth of issues with my mum that meant we had to break contact, and my show explores what it was like to be hit by this grief double whammy and what I learned from it. I'll also throw in the odd knob joke to cleanse the palate. Or should that be 'dirty it'?

Because I'm a glutton for punishment. No. In truth, it's the most rewarding theatrical festival I've ever been a part of and a great chance to spend a month honing a story. And that's what I want to do with this show particularly.

The scale, which dwarfs the rest really, and the profile extended to it. The fact it takes place in Edinburgh lifts it too, as it's a city like no other. Where else can I perform a show daily in an underground bunker filled with spores carrying a long-dormant lung infection? And have I put you off coming to see me yet?

I was inspired to become a performer by two Pauls: McCartney and Daniels. As a child, I was obsessed with magic - a fascination ignited by The Paul Daniels Magic Show, which I'd watch weekly. I subscribed to magic magazines and would order tricks from Davenports in London, which I'd practise for hours in front of a mirror at home before showing them to whoever was unlucky enough to cross my path. Anyone babysitting me was subjected to an

impromptu magic show with no hope of escape. It was like child cruelty in reverse, with the kid administering the cruel bit.

Around the same time, I also stumbled across The Beatles. Most weekends involved a trip to Stevenage Indoor Market, where I'd snap up as much of their vinyl as my pocket money would allow. Macca was my favourite Beatle, and my dad took me to see him for the first time at Earl's Court in 1993.

While watching his recent set at Glastonbury on TV, I crunched the numbers to discover I was 12 at that first gig, while my dad was 46 and Macca was just 49. I'm now 41, my dad's no longer with us, and Paul is 80; can someone have a word with the Universe about this, please, as I'm not happy about it.

My upbringing affected my personal and professional life hugely due to the impact on my mental health. My childhood was difficult, which I go into more detail about in my show, and the depression it triggered still follows me to this day though I'm in treatment and have tools to help me cope with it. In some ways, what I went through made me take a creative path as I attended a weekly drama club as a teenager for a break from my home life and formed a band as another route out of it, but I had no self-worth and believed I wasn't supposed to be happy. The need to get away from my home life made me driven, though I put too much pressure on myself to succeed as a performer as if doing well would justify my existence.

I've since adapted this motivation to my work on the job, so to speak, as it was very unhealthy. But the impact of what I went through is huge, not least for all the time lost to recovery and to adjusting my bullying internal monologue. However, this show is all part of that adjustment; I'm treating it like a massive funeral pyre, though not literally, as I know what happened to the old Gilded Balloon building and the last thing I want to do is burn down Just the Tonic. Though that's just what I'd say if I wanted to, isn't it?

Seeing Floella Benjamin play Aladdin in panto at the Gordon Craig Theatre in Stevenage in 1986. It was the first live show I'd been to, and it's no exaggeration to say that I walked out of that theatre knowing what I wanted to do with the rest of my life. I’m referring to performing, not flying on a magic carpet.

Curing cancer. And I reckon I would have nailed it by now too. Oh well: comedy’s gain is mankind’s loss.

Yes, and yes. I kept this answer brief as some of my others were worthy of War and Peace.

My main problem with the phrase 'cancel culture' is it most often trips from the tongue of someone who expects free rein to say or do something horrific without recourse. And there's nothing wrong with wanting accountability. Also, societal expectations can change with time, and you sometimes need to adapt to them.

However, creativity does need space to flex. Stand-up in particular. But it's all about context. And if I need to scan the room before delivering a line to check I'm in acceptable company then I probably shouldn't say it.

Kriss Akabusi for his infectious laugh and Dick Van Dyke because I'm amazed by his versatility. He's an underrated actor with more depth to his performances than people give him credit - watch him in Columbo and Night at The Museum for proof - and Diagnosis Murder is one of my guilty pleasures. He's got more energy at 96 than I have in my early 40s. And he's paid his penance for that cockney accent.

If you're already coming up, my main advice is to be kind to yourself and also not expect too much. The Fringe is an emotional rollercoaster at the best of times, and it's easy to overdo it. You quickly get sucked into the Edinburgh bubble of believing what happens on the Fringe is really important, particularly regarding reviews. But it doesn't matter what one person thinks if you stay true to what you want to do.

If you're aspiring to come up in the future, I'd say start saving now as the cost to do it is astounding and keeps getting more extortionate. Someone's making a lot of money, and it's not the performers. Is it you? I bet it's you.

I’m on Twitter at @david_ephgrave, Facebook at www.facebook.com/TheDavidEphgrave and Instagram at @ephgraveseyeview. And if you shout my name at the top of your voice, I'll pop by if I'm in earshot.

David Ephgrave: Good Grief is performing at Just the Tonic at the Caves at 2:40pm from 4th to 28th August. For tickets and more information visit edfringe.com. 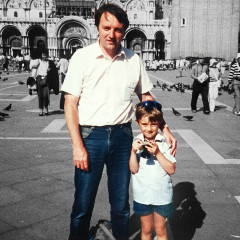 "The Fringe is an emotional rollercoaster at the best of times, and it's easy to overdo it. You quickly get sucked into the Edinburgh bubble of believing what happens on the Fringe is really important, particularly regarding reviews."