"One creates art that is meant to be seen, felt, and heard by others. There is great responsibility that comes with that!"

Lightweight is a dark comedy about my year spent in a 28 day addiction treatment facility to recover from anorexia, and the pangs I went through to keep a debilitatingly joyful disposition through the pain.

When I created Lightweight I thought that Edinburgh Festival Fringe would provide the perfect opportunity to have my show seen by a diverse international audience. It seems to me that audiences at the Fringe are supportive and open to all forms of art, and that nothing is too silly or too serious to have a home at the Fringe.

I’d say that it’s the amount of shows and audience members that really sets it apart! It’s the world’s largest theatre festival! I have only participated in one festival prior to this, and it was quite intimate in comparison.

My mum loved showing me classic movies as a child, so I instantly fell in love with films and stars of the 1940’s, 50’s and 60’s. I was infatuated with Audrey Hepburn. It seemed that everything she did – from the way she’d arch an eyebrow to the inflection of her voice– was done with such calculated precision. She doesn’t walk, she glides. I’m not like that at all - I like to go off the cuff, I love to improvise and be messy. But I loved to watch and study Audrey.

Well, to start, I am a middle child. So right away I needed a large amount of attention that I never received. To cope, I wrote and then I performed what I wrote! The only way to get a captive audience in my house was to say “I have a show for you to watch”, which was often met without much enthusiasm but I never let that stop me. Also, I grew up just outside of New York City. I was able to attend off Broadway and Broadway shows at a young age with my public school – we used to call them “field trips”. That absolutely impacted me as a budding artist. Later in my childhood, my parents divorced and that was a real turning point in my need to create art. It became my escape. I wasn’t creating anything deep, mind you! Often it was turning on the video recorder while my little sister and I danced and sang to The Muppet Show record album! That’s when I learned the importance of art when times are tough. It isn’t unhealthy to need an escape. It’s healing. You really can’t be angry at the world when you’re attempting to tapdance to a song sung by Kermit the Frog, can you?

I believe I was 8 years old when my school took the members of its choir (why was I in choir? I cannot sing to save my life!) to see The Fantastiks off-broadway. It was my first time seeing professional theatre and I could not stop looking at all of the lights, the sound equipment, and the orchestra. I would look towards the wings of the stage to see if I could see backstage. I would watch the audience. I wanted to feel what it was like to be on the stage and have that point of view, not just watch what was on it. I remember that day like it was yesterday.

Oh, I would absolutely be touring Lightweight around the world! I hope that after the Fringe is over, that is my only job!

Covid-19 did not change the way that I create work, but it did make my message feel more urgent. Eating disorders, addiction, and overdose rates rose rapidly during the pandemic. My show is not a solution to any of this, but it does help people understand why and how this happens and what recovery is like… with a giant, healthy dose of humour.

Not enough sleep or coffee.

Not exempt! One creates art that is meant to be seen, felt, and heard by others. There is great responsibility that comes with that! I was very aware of that when I created Lightweight. I believe that making mistakes is human. Having the opportunity to take responsibility for your mistake, apologizing, righting your wrong, and then never repeating that mistake again is a privilege. However, blatant racism, hate speech, homophobia/transphobia, sexual and physical violence… that isn’t a “mistake”. That isn’t “art”. That’s an arse who should get canceled. Make room for an artist who is putting important work into this world.

Gilda Radner. She just had it, you know? Vulnerable and tough, small in stature but could command a stage of any size. Childlike one moment, a sensual woman the next. Her characters were so damn good, it’s no wonder that they still live on today. And her physicality! I think that if she were alive right now she would still be bouncing off of walls and doing backflips. If only I could pick up where she left off.

If you are an introvert, start practicing and planning right now! Getting a show to the Fringe requires a lot of networking, talking, and pitching to people. It is a lot of energy. Have a support system in place and have snacks with you at all times!

‘Lightweight’ will be at the Underbelly Cowgate – The Wee Coo at 2.50pm from 3rd – 29th August for tickets go to www.edfringe.com 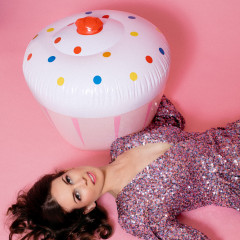 "One creates art that is meant to be seen, felt, and heard by others. There is great responsibility that comes with that!"