We speak to Alice Brine about her show Brinestorm, which is coming to Edinburgh Festival Fringe in August, as well as how Covid-19 changed her attitude towards work.

Hello, I’m Alice Nancy Brine. I’m a stand up comedian born and raised in New Zealand but I've been living in London for the past 5 years. I have a cheeky British passport which made that super easy.

Brinestorm is a collection of my favourite stories, observations and anecdotes. It’s material from the last year or so that has been bringing the laughs to crowds across London so i’m super excited to share it with a wider audience. It’s weird saying “I tell stories about myself” as a pitch for a show but the difference is I’ve had chaotic ADHD my whole life and so there are just so many situations I get myself into that seem really unbelievable. I’ve been in love with storytelling since I was only young and I was born without an ability to fear a crowd. Like I just love talking to a crowd of people – I only found out that others found that scary when I was 10 and it baffled me because I legit just thought we all found it really fun. Brinestorm is fun and it’s honestly something I’m super proud of.

Literally just for fun! I’ve done lots of NZ/AU festivals and Fringe is the biggest one in the world. I’ve been dying to bring an hour to Edinburgh and am so excited I finally got the chance. In the build up to Edinburgh I've found out that there’s a really big importance on reviewers coming to your shows. I had no idea about this. In NZ the approach is far more casual, so I'm excited to dive into the hustle of it all and hopefully put some smiles on some reviewers' faces. I really like the style of stand up that I do, it’s not really like anyone else out there and is very conversational which I just absolutely love doing. So I'm excited to bring something unique to the wild world of Edinburgh Fringe.

Edinburgh is the biggest Festival in the world (so i’ve been told) and that makes it really different. Also there is a big importance placed on making sure reviewers and press come to your shows, whereas in NZ the focus is just about getting bums on seats. Sure we would get reviews but nobody really read them or care about them. The big difference with Edinburgh is it seems to be that getting reviews is more or less the most important part of it all which has been a bit of a comedy-culture-shock for me to get used to.

Since I was just wee I’ve been writing and performing. I used to write speeches for fun, and I'd write stories all weekend. On my 8th birthday I asked for a stapler so I could turn my stories into  books and I was beyond thrilled with it. From there it just escalated. I would arrive at my school principal’s office every time there was an assembly and beg her to let me put on a one woman show in front of the whole school. I did this multiple times before I even turned 11. I just knew I loved making a crowd of people laugh. I was born without the stage fright gene. I’ve just never been nervous talking to a crowd. It just doesn’t register in my brain as something to fear. Eventually I did a theatre degree and immediately started working in an insurance call centre. After 2 years of that my best friend Emily slapped me across the face and said ‘Bitch go and do an open mic spot or else’ so I did and the rest is history.

Absolutely. I’m state educated,  ADHD, with three siblings and an amazing influential single mum. Without my mum being so encouraging and supportive of me I wouldn’t be who I am today. New Zealand is a unique place to grow up. I was born and raised in a country where there is a beautiful empty beach within 20 minutes of everywhere but there is also a very tiny economy and a lot of internalised misogyny. Growing up in New Zealand in the 90s, loud women were absolutely not encouraged so I always stuck out like a saw thumb. So a lot of my resilience comes from knowing that I was always very much a black sheep in lots of situations. I’ve always gone against the grain and never really even known how to blend in with the crowd, even if I desperately wanted to. I think most comedians have this experience. But having built a thick skin from that means I'm able to really and truly be myself on stage. I say what I want in a way that I want to say it and I'm incredibly lucky that for some reason people seem to Love it. I definitely do comedy in a bit of a rule-breaking way. All that bullshit about ‘making a joke every 12 seconds’ and ‘structuring the story X way’ and doing all these ‘comedy rules’ I just completely ignore all that and do it the way I know I love and I know audiences love. It’s nice to prove the system wrong like that.

Writing! I have always been obsessed with writing. I would write books every single day for ‘fun’ and at the weekends too. I was actually always really impatient with it. Saying that I was always writing makes me sound like a bit of a bookworm but I honestly was the opposite. I was loud and social and ran around outside but I just had this undying love for storytelling that I have kept with me my whole life and now I get to make a career out of it. How cool is that?

Leaving high school I was very much torn between three things. 1) Becoming a midwife 2) Becoming a computer programmer 3) Becoming a writer. I’m none of those things, I’m a stand up comedian. But the more I think about it I would definitely be a midwife. It’s weird because I actually don't fancy the idea of having kids all that much. I’m just obsessed with birth. The fact that women can grow actual people inside themselves is something that we’ve all become way too casual about. It’s an absolutely buckwild physical action that men literally can’t do.  More so the work that midwives do and the training they undergo is that of almost exactly the same amount as you would to become a medical doctor, yet due to sexism people don’t really consider midwives doctors. Which is absolutely insane because that’s literally what they are. How is a gynaecologist a doctor but a midwife isn’t? Doesn’t make any sense at all. So yeah, if I wasn’t a stand up comedian I would absolutely be a midwife.

The way that it did affect my ‘work’ was simply that going through covid changed all of us.  We were all so brutally faced with our own mortality. We were all left feeling anxious and terrified and uncertain. As much as it sucked we all grew from it. I don’t know one person who doesn’t feel like they’ve changed massively from 2019-2022. We all feel like totally different people now. So in that way I'm sure the pandemic has had an effect on how I perform. Maybe I'm braver now. Maybe I know I've got less to lose. Maybe i just think ‘fuck it I could die tomorrow lets have fun on stage.’ But in terms of direct-impact it’s not changed anything about how I do stand up, but it has changed who I am as a person.

“You’re coming home with me.”

If cancel culture means speaking up when someone has done something bad, and needs to be called out then I'm all here for it. It only becomes a problem when people get ‘excited’ to cancel people a bit too quickly. I feel like sometimes people like to imagine there is a big score-board above their head as they walk around, displaying a brightly lit number of ‘people they’ve called out over minor things on the internet today.’ It’s like collecting points for saying petty shit on the internet. I don’t like that. It’s still important to let people make mistakes and let people apologise when it’s small enough. However if a venue doesn’t pay you then yes tweet about it loudly. If someone is a creep back stage, name and shame. But just don’t let yourself get caught up in a situation where you’re calling out shit that doesn’t really impact you because you like the power it makes you feel like you have.

My mum. I miss her so much I haven’t been able to see her because of the pandemic and then finally we are allowed back but all my money and annual leave has to go to Edinburgh. She’s hands down the funniest person on the planet, she’s an amazing writer, she has bad-ass comedy timing. She’s my hero.

Alice Brine’s debut stand up show ‘Brinestorm’ will be at the Gilded Balloon Turret at 4.20pm for the month of August for tickets go to www.edfringe.com 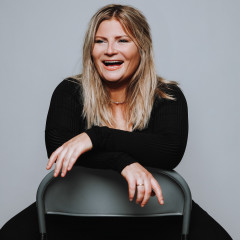 We speak to Alice Brine about her show Brinestorm, which is coming to Edinburgh Festival Fringe in August, as well as how Covid-19 changed her attitude towards work.