Voice MagInterviewsWith Whom On Zoom: A…

We speak with Jules Robertson, an autistic actor, about his experiences in the TV and film industry, what it’s like representing the autistic community on screen and the next steps in his career.

Jules Robertson is a TV and short film actor who has Asperger’s Syndrome. Robertson was a regular on Holby City for multiple years and recently starred as the lead actor in a short film called “LOVE.” Robertson is a fierce advocate for promoting diversity and inclusion in the TV and film industries. He uses his experience as an autistic actor to inspire others and break the boundaries and stigmas that are so often associated with hiring learning disabled actors. Robertson hopes that others will follow in his footsteps and casting directors will take the time to hire learning disabled actors to portray those like them but also characters without disabilities as well.

In this interview, Lauren Johnson, a trainee journalist at Voice, speaks with Robertson about his experiences in the TV and film industries, the roles he has played and the ways he works to change the stigma surrounding learning disabilities. 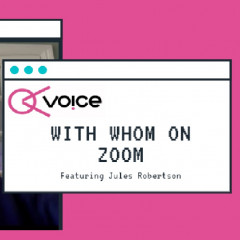 With Whom On Zoom: An Interview with Jules Robertson

We speak with Jules Robertson, an autistic actor, about his experiences in the TV and film industry, what it’s like representing the autistic community on screen and the next steps in his career.