Samuel Clayton provides a gripping solo performance that ‘provides a moving insight in to the tribulations of additional learning needs in mainstream education.’ Emrys loved the simple lighting and effective character changes, distinguished by accents, movements and clothing. While Statements is definitely a factual examination of the difficulties of providing support in the education sector, it didn’t have an ‘educational’ format at all, and Emrys even felt it should be put in front of the Education Select Committee! Ringing praise indeed.

‘A masterful and sublimely choreographed work of physical theatre’ is how Rebecca described this performance of Georg Büchner unfinished play. Although somewhat dubious of physical theatre, Rebecca could find nothing to fault, stating that she had seen performances by the Royal Ballet that were less in synch, and everything was efficient and valuable. It’s even more impressive when you know that the five performers are still students, and in the infancy of their acting careers, although ‘perhaps they could teach some of the more established performers… a thing or two.’

Rebecca’s second top pick comes in the form of Brennan Reece’s new show, Evermore. In 3000 seconds, Reece brings joy and laughter to his audience through a combination of stand-up, spoken word and theatre. He is also a master of audience interaction, dipping between performance and engagement with ease, ensuring they never felt like they were being talked at. Rebecca enjoyed his show so much that she even unapologetically described Brennan Reece as ‘the future of comedy’.

There has been a lot of hubbub about gig theatre, and Electrolyte is a fantastic example of how it is done right. Louise was moved to tears by the power of this performance, which combined beat poetry and live music to explore the often under-discussed issues of mental health and male suicide. Capturing the 'vivacious recklessness of working-class youth in the city of Leeds... Electrolyte is an example of the simple yet uncompromising power of the arts.’

Henry Naylor is an award winning and much respected playwright, and his latest play demonstrates exactly why he does so well at the Fringe. With global politics in the state that it is, Games is a timely piece that looks at the lesser known struggles of German-Jewish athletes in the build up to the 1936 Olympics. The set, with its stark and austere aesthetic provided just enough to not be boring, and allowed the audience to be inspired by the phenomenal performances put in by Lvova and Orange-Turner. The writing was exemplary, with nothing wasted or misplaced. Perhaps more than that though, the whole piece served as a chilling reminder of what can happen what the wrong person comes to power, and dangerous political ideologies go unchallenged.

Ciarán Dowd is best known for his work as one-third of the (fantastic) sketch group BEASTS, but in this frantic, ridiculous and outright hilarious debut solo show, he demonstrated that he certainly has the chops to go it alone. From the very first second the audience were subjected to an explosion of energy that continued to burn throughout the entire hour. Titular character Don Rodolfo is a loveable ass, and with an over inflated ego, exceptional sword skills and a highly questionable spanish accent, is on a mission of redemption and revenge. This show was so funny you left feeling physically assaulted from laughter.

Flushed is a show about premature ovarian insufficiency, and although the condition affects 5% of women under 45, it isn’t often talked about. Theatre Unlocked are bringing it to the public’s attention in a simply amazing piece of theatre. Rather than try to summarise, here is what Sam had to say about it:

‘I am unashamed to say I cried, a lot, but I also laughed a lot. This isn’t a sad or depressing piece; far from it. There is so much light and so much dark and so much depth in this play; it is a true snapshot of life, with all its crazy ups and downs. Even several hours later I am tearing up writing this review. It’s shows like this that make Fringe worth it. All the terrible and mediocre shows, all the early mornings and late nights, they’re all worth every single second to find diamonds like this.’

We have reviewed Colin Cloud three years on the trot, and every time the reviewer has awarded him five stars and said that the show is an exceptional demonstration of deductive talent… or possibly mind reading! This year it was Sam’s turn to watch Colin Cloud, and true to form she came away awarding him another five stars (making it 20 from Voice) and gushing about him for the remainder of our time in Edinburgh. Described as ‘Completely mind-boggling and utterly fascinating, it’s only fitting that he finally makes it onto the list of Pick of the Fringe winners. 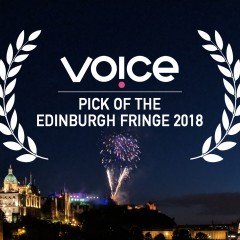 Voice's Pick of the Edinburgh Fringe 2018