Based on a true story, Henry Naylor’s play is a gripping and thought-provoking account of the lesser know struggles of German-Jewish athletes. The play portrays the lives of Helene Mayer and Gretel Bergmann in the run up to the 1936 Olympic Games.

Helene, played by Lvova, is a world champion fencer and has already won the 1928 Olympic Games. To Helene, the world of sport is divorced from the realm of politics, but soon after Hitler assumes power these worlds collide and she is forced to make a decision that will ask her to give up everything. Lvova gives a superb performance portraying Mayer’s steely poise and control, and then like the gradual cracking of glass, her thinly-veiled vulnerability is laid bare. As Lvova speaks, she stares out past the audience fixated on a memory, taking the audience with her as she re-lives each second.

The fierce and determined Gretel Bergmann, portrayed by Orange-Turner, is an up and coming track and field athlete of Jewish heritage. As a result of her race Bergmann suffers under the racial laws that made it hard for Jewish athletes to compete. Orange-Turner masterfully depicts Bergmann’s vivacious energy and child-like desperation. This child-like naivety is expertly balanced with embittered hatred, as she spits out her words, in spurts of feverish contempt.

Both actors work effortlessly together as they tell their stories: they take it in turns dipping and diving between two separate monologues. As one speaks, the other freezes allowing the focus to be solely on the narrator. The effect demonstrates both actors ability to hold the attention of every person in the room, as we wait with baited breathe to hear the next spoken words.

A truly genius piece of writing, each scene is relevant and not a word is misplaced as the fractured public consciousness of inter-war Europe is painted in our minds.

The set is empty, with nothing but a black box on stage and three red pieces of fabric hanging behind. The austere aesthetics emphasise the actors words, allowing the audience’s imagination to be inspired only by their performances. This is a risk, but one that pays off.

For more details and information visit the EdFringe Website 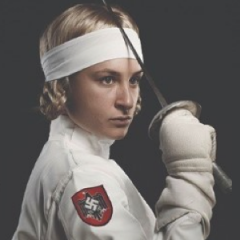