2020 has undoubtedly been an incredibly troubled year for gaming, but that isn’t to say that it has been a complete bust. Games designers, blessed with being part of an industry very used to working digitally — that being their whole MO — managed to put out some incredible titles this year. Here, we take a quick look at some of the best games of 2020.

Some quick house-rules before we start: no remakes allowed here, so the Demon’s Souls (very deservedly) and Final Fantasy VII (slightly less so) remakes are going to have to settle with honourable mentions. Likewise, as much as I longed to include it, Among Us did not come out this year and thus also doesn’t get a spot. Only original titles or sequels that came out this year will be part of this list. So without further ado…

I’ve always been a big fan of dogfighting and space-combat games, and sunk hours on my PS2 playing Star Wars: Starfighter as Nym, Rhys Dallows, and Vana Sage. I was very excited, then, when it was announced that a dedicated Star Wars space/flight combat game in the vein of Rogue Squadron and Starfighter was being developed.

Star Wars: Squadrons delivered on the fast-paced dogfighting action with the EA Star Wars games’ characteristic spectacle. Whilst I’d have personally liked much grander-scale space battles, keeping things down to a tight, highly specialised 5v5 shows EA were clearly taking from the hugely popular class-based shooters of a few years back, and it mostly works well within the setting.Unlike the much-maligned Battlefront however, this hasn’t seemed to come at the cost of predatory monetisation strategies. Maybe EA has learnt their lesson? Well ’tis the season for miracles…

The incredibly popular Miles Morales from the Spiderman comics — and recently seen in greater prevalence thanks to his central role in the animated film Spiderman: Into the Spiderverse — comes to gamers’ screens in this stand-alone expansion to Sony’s very successful Spiderman game.

Most of the slick Arkham-style counter-combat persists here, although Miles’ more stealth-oriented approach may upset some of the previous games’ detractors who already said that Peter Parker felt a little too much like Batman.

There is No Game: Wrong Dimension

No. This can’t be right; this is a game review, but there is no game! You must have this wrong, please go read another article…

An incredibly witty postmodern-comedy, this indie game by French developer Pascal Cammisotto insists on telling the “User” that “there is no game”. However, with a little poking around (much to the annoyance of the narrator) you find find that there is, in fact, a brilliant little game in here that wonderfully satirises games and game development, whilst also providing a charming — if surreal — little story involving computer personalities clashing with the real world.Elements of the story clearly reference the developer’s own experience trying to develop the game through struggles following the failure of its kickstarter, and this earnestness gives the game a sense of genuine joy and authenticity that is hard to find outside of the indie realm.

Ahh Crusader Kings, a franchise I have always loved far more than understood. In this fresh new venture moving on from the truly massive Crusader Kings II, CKIII revamps Paradox’s infamous medieval sandbox rule-em-up with an ever-more detailed (and astonishingly researched) European setting, and allows you to play as the lowliest noble, to the emperor of the Holy Roman Empire. Your actions not only affect what occurs on the stage of the medieval world, but also has a very personal angle when it comes to courtly life, as your actions impact on yourself and on your friends and foes amongst your court.

CKIII manages to give a much fresher face than its 2012 predecessor, but as always the core appeal of this game is its scale, complexity, and focus on theatre-of-the-mind play where the only limits are your imagination and any moral qualms about what you will or will not do to your people (or indeed equine companions).

Spiritfarer laid it’s cards out on the table right from the off: beautiful art style, animation, and score all worth of a Studio Ghibli film, all generously slathered over a game dealing with a poignant topic. The game’s tagline describes it as “a cozy management game about dying”. Oh yeh; this game was gunning for awards from every which way.

You are a spiritfarer, tasked with ferrying souls across to the afterlife (a cutesier version of Charon from Ancient Greek myth if you will). Along the way you will come to befriend your quirky and varied residents of your boat as you sail them to their final destination, before the game forces you to bid them a teary farewell at the gates to the afterlife, whatever that may be.

Perhaps a cruelly auspicious game for our current times. Whilst the gameplay is a little basic and repetitive, this is a game you drink in rather than micromanage efficiency and strategies for, and only the most stony-hearted of reviewers would fail to be moved by the idea of having to bid your new digital friends goodbye as they pass on into the great unknown.

I wasn’t expecting to be putting a Call of Duty game on a top ten list any time soon given their somewhat lacklustre performance for a few years but I was very pleasantly surprised by Treyarch’s offering this year. Black Ops: Cold War feels like something of a return to form for the franchise (much like Modern Warfare did for Infinity Ward’s side of the franchise).

I appreciate that for many, Call of Duty is a game about the multiplayer experience, but I’d argue with the number of smaller (and much less expensive) multiplayer shooter games like Insurgency: Sandstorm or Squad, COD really has to bring something to the table to justify its AAA price-tag and I think the zombies mode and the single-player campaign is where Cold War shines, especially considering the conspicuous and much maligned lack of a campaign in the last Black Ops game. The faintly stylised art-style and elaborate conspiratorial topic delving into the CIA and Kremlin’s seedy underbellies bring the game back to its roots from the original Black Ops. With both sides of the COD coin giving strong offerings over the last two years, here’s hoping we might be seeing something of a renaissance for the franchise.

Doom needs little introduction, and Bethesda’s new darling (after Fallout shredded its fan-goodwill and Wolfenstein doesn’t look far off doing the same) has been delivering success after success.

Brutal and gory and violent beyond abandon, Doom Eternal maintains the winning “rip and tear” formula and amps up the scale and showiness to new heights. Minor spoilers here but: do you want a game where you can blow a hole in Mars opening a portal to hell as you grab your BFG and shoot yourself out of a cannon to confront the demonic hordes? Then yeh, Doom Eternal will certainly scratch that oddly specific itch for you.

This absolute gem of a game comes from the creators of the much-loved Infamous series, but a further departure from their urban, morally dualistic superhero game they couldn’t really have made.

Ghost of Tsushima places you within a truly stunningly rendered 1200s Japan — falling cherry blossoms and surreal ancient beauty abound — and into the boots of samurai Jin Sakai as you attempt to protect feudal Tsushima from the first Mongol invasion of Japan. This is the romanticised samurai experience with extraordinary emphasis on style (the endless cinematic graphics settings should give that away) but without sacrificing gameplay, as you engage in a satisfying combat system where you can carefully duel your foes or engage in a full-on melee, katana glinting in the sunlight.

Nintendo may not have intended to have made the “lockdown game of 2020” but that is what they have undeniably done here (if perhaps lightly contested by the aforementioned Among Us).

Animal Crossing is a game that has had a long time to refine its formula for maximum cutesy coziness, and the appeal of escaping to your own private island and managing it for all your animal friends is undeniably as charming as it can get. In lockdown especially, your own little beautiful world that you can craft to your liking, away from the ever-present apocalyptic headlines and frustration of politics captivated the world (or at least, the world as envisaged by Nintendo, aka. anyone who can afford a Switch).

Ok so I’ll preface my number one pick for 2020 with two horrible statements of lampshading — firstly: I love Greek myth (in case the Charon reference earlier didn’t give that away), secondly: Supergiant Games can do no wrong in my eyes.

So needless to say when the creators of Pyre and Bastion released their latest game, a gorgeous hack-n-slash roguelite, I was more than a little stoked. They completely pulled it out of the bag for me. You play as the son of Hades: Zagreus. Your task is to defy your father and escape from Hades (the place and the deity) to join your godly relatives on Olympus.

As to why this game is my number one pick, it is simply because it beautifully executes every element I care about in a video-game. The animations are slick and satisfying, the combat is accessible yet complex, the visuals are beautifully stylised,varied and flashy, and best of all is the sound! You need to go and listen to Darren Korb right this instant – he is a musical genius.

Hades has it all, and somehow managed to make the oft-impenetrable roguelite genre accessible to people of all skill levels without dumbing anything down to do so.

Hades is a masterpiece. If you’ve got £20 to spare over this holiday, I can’t recommend it highly enough; go show Supergiant Games some love. 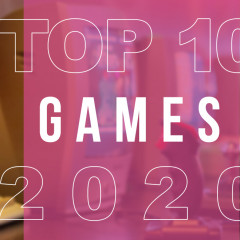