Voice MagFeaturesHow to… report at th…

In Part One you looked at the planning that goes into reviewing Edinburgh Festival Fringe, but what do you do once you're actually there?

The team at Voice are given a Edinburgh specific review guide, which dictates how their pieces should be written, and what content should go in them. Last year's version has been précised, and is available online to look at.

Yes, this was in Part One, but I did say I can't overemphasise the importance of planning. You cannot review a show if you aren't there. Make sure you know where you are going, and how long it will take to get there. Do you know where you are picking your tickets up from, or have you already been given them?

It might be nice to go in with some idea of what you are about to watch, but likewise some prefer to have no pre-conceptions. There are benefits to both approaches, but you need to find what works for you.

Another divisive issue, some people feel they need to take notes, while others would rather give 100% attention to the show, and then get it all down after. One thing everybody agrees on though is, if you are going to take notes, do not do it on your phone. It will come across as rude, and will distract other audience members if you are just sitting there tapping away on a phone. Carry a notebook and pen with you if you would like to take notes. Equally, you probably will not want to sit in the front row if you are taking notes, especially if you are in a comedy show. They will notice you, and they will call you out on it.

We have numerous guides on the website on how to write a review, including ones from Jake Orr, and Bhavesh, our Associate Editor. Emily similarly captures some key points to consider when writing a review.

Our team are instructed to keep in around 350-400 words long. The review should summarise the show, not spoil it. It shouldn't be personally attacking, but if the show was bad, it shouldn't be sugar coated. Your review must justify the score given, so don't heap praise on something and then give 2 stars.

The big thing for our team is ensuring they are written in a timely manner. I impose a rule saying that reviews should be on the website 24 hours after seeing the show, at the latest. Remember the friendly PR's I mentioned in the last guide? They won't be so friendly when you've failed to get reviews of their acts over to them. Also, the longer you leave it, the more cloudy the details of the show will be to you. It's much better to get everything down while it is still fresh.

It is unlikely you will be allowed to take photos while in the show, so try and find some press pictures of the act when you are out of the venue. It makes your review so much more attractive.

This is a two-fold consideration. First, you want to promote your own review. This is done through social media, especially on Twitter. It will almost certainly be picked up by the PR's, and probably the acts themselves. One retweet by either of these and many people will see your review, which brings amazing traffic to your website.

The other side of promotion is promoting the show. Our reviewers are instructed to include the salient show details (time, venue, days off) and include a link to the Fringe ticketing website. 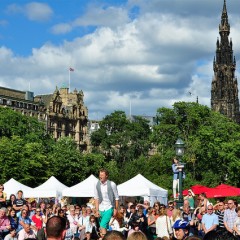 How to… report at the Edinburgh Festival Fringe (part two)

In Part One you looked at the planning that goes into reviewing Edinburgh Festival Fringe, but what do you do once you're actually there?