Ahead of his latest solo exhibition Legacy and Disorder, the contemporary artist talks about his work and former life as a painter-decorator

“There’s a whole world out there, do you know what I mean?” Wood-Evans is describing a picture he thinks he saw on painter Alex Kanevsky’s Instagram. “He posted one of Lucian Freud’s nudes. It was just the bosom, and it was almost like a Turner painting. The bosom! It’s like, it fucking is! It’s like a sky, and you’re like – that’s what painting is about.”

We’re at the Mayfair gallery exhibiting his work. Wood-Evans is unabashedly frank about his passion for painting. He swears excitably, almost matter-of-factly, about his favourite artists (A portrait of Thomas Lawrence? “Oh fuck, that’s properly good.” Cecily Brown’s abstracts? “I fucking love that”). Sometimes he almost gives the impression that he’s as surprised as anyone at his transformation from local tradesman to international contemporary artist.

“I was a postman. I did building work, shop work, bar work. I could polish a floor pretty good – or painting and decorating,” Wood-Evans laughs. A quick glance around the gallery at his Old Master-inspired paintings and it beggars belief that this chap might have cut-in your ceiling or added a fresh coat to your interiors. I mean, talk about transferable skills.

“Don’t worry, I’ll do that,” he jokes, waving his hand in a painterly fashion. “That bit of cutting-in there, it shouldn’t be a problem. Massively over-qualified for that, I would have thought.” Thankfully, Wood-Evans turned down an offer from his boss to take over the Brighton business. Instead, he chose to pursue painting full time. 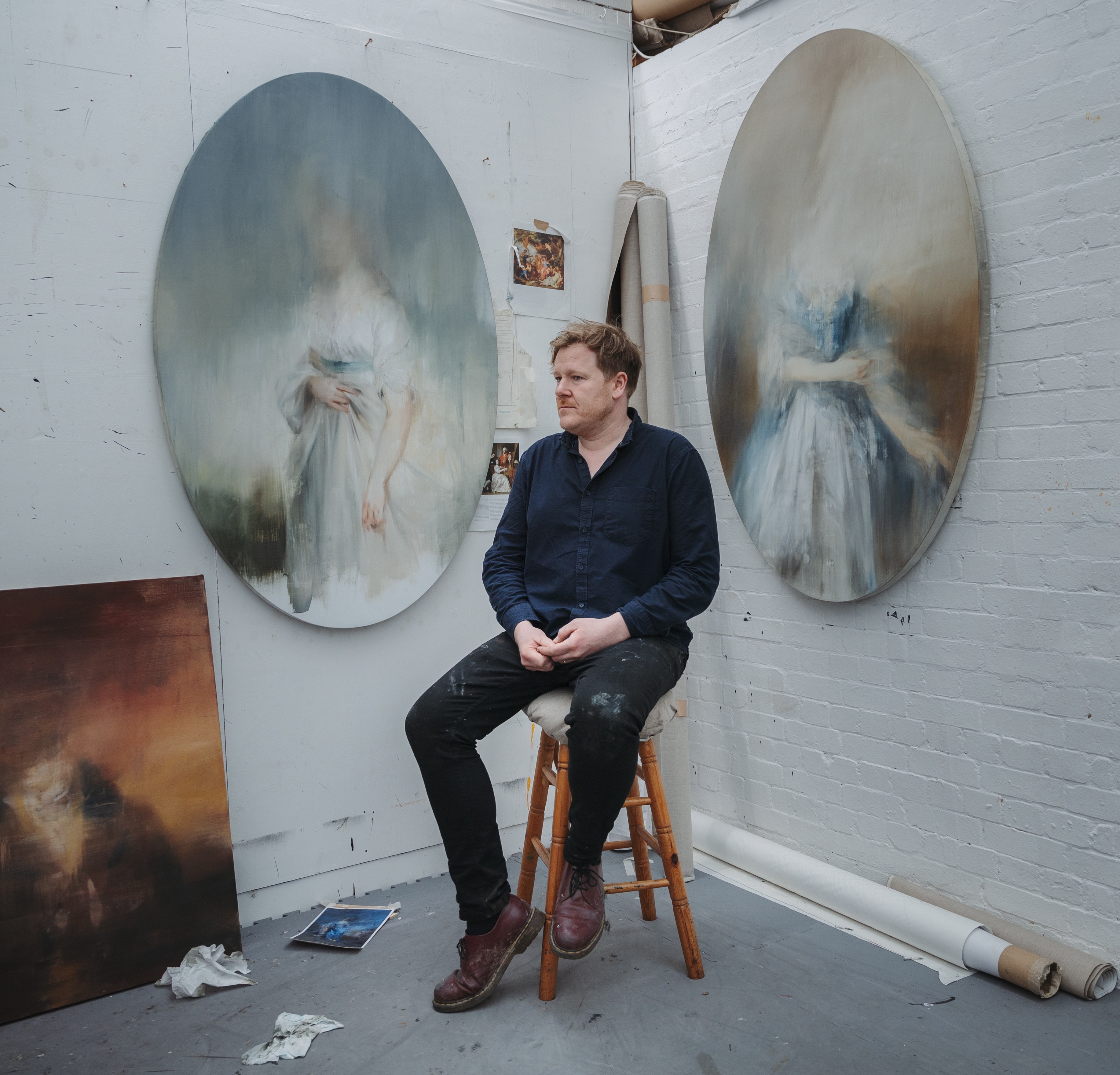 Jake Wood-Evans with Study for Princess Sophia, after Beechey and Study for Mrs William Villebois, after Gainsborough
“I had a garage that I painted out of. Then I got a studio a few years later, which I shared with other artists. I was there for quite a while. I ended up living in that studio at one point, the classic cliché artist thing. I started having little exhibitions and people were coming to the studio to buy my work. Since doing the art full-time, it’s just been getting bigger and bigger and more exciting.”

Moving away from Brighton, Wood-Evans now lives with his wife and two children in Hastings, where his studio is based. In 2018 he debuted as a feature artist at the Nottingham Castle Museum. Today, his artworks can be found in private collections internationally, across New York, Miami, London and Antwerp.

Wood-Evans large-scale oil paintings are unrelenting. Sometimes violent, sometimes melancholic, his studies of 18th-century British artists and their sitters draw on works by Thomas Gainsborough, George Romney and Joshua Reynolds. He uses bleaching and staining techniques to scrape away and erode his portraits, obscuring the Old Masters’ original sitters in what he calls “mists” of light and colour.

That Legacy and Disorder began as a landscape show, before developing into figures, perhaps makes more sense than one might at first consider. There’s an elemental quality to Wood-Evans’ style of painting, and many will recognise the influence of Turner’s landscapes in his work. His concern is not with the subject of the sitter, since he does little to no historical research in that regard, but with intricacies or moments of form. A fold in the cloth might spark his imagination, for example – or a pendant catching the light.

“They’re relics slowly fading,” says Wood-Evans, “a very delicate thing that’s slowly becoming lost in the world.” Exploring erasure and remembrance, his most compelling works are exactly that. The figures in the twin oval paintings, Study for Princess Sophia, Daughter of George III, after Beechey and Study for Mrs William Villebois, after Gainsborough, appear to be fading, almost lost – forgotten even – in a haze of translucent light, their faces barely visible beneath it. Wood-Evans focuses instead on the aristocratic dress, the way it falls beside the hand and from the material cinched about the waist.

At the more violent end of the spectrum, Wood-Evans’ triptych Blue Boy, after Gainsborough boldly reworks Gainsborough’s original, iconic portrait. Certainly, the most striking of his collection, Wood-Evans’ heavy mark-making and fierce strokes of light and colour further establish the artist’s emerging visual language, reconstructing historical subjects in a shifting and fractured reality. Some of his works, because they are paintings of paintings, struggle to break free of their originals and feel more like studies than independent pieces. His most accomplished paintings, like those of Blue Boy and Princess Sophia, are those which radically take ownership of their antecedents.

Blue Boy, after Gainsborough
For the most part, his paintings subvert our expectations of portraiture, that they should ostensibly be about the sitter as much as anything else. Our interest in their absence, of “unfinishedness” as an essential quality of art, is an 18th-century idea. In 1757 philosopher Edmund Burke’s A Philosophical Enquiry defined sublime images by their incompleteness, since “the imagination is entertained with the promise of something more” beyond what we see. I wonder if Wood-Evans considers himself to be continuing the Romantic tradition in this way.

“Do you know what, I don’t even care. The idea of Romance gets a bad rep, but if you can’t be passionate about something, if you’re just going to be analytical about everything, then what’s the point? I feel like it’s about giving someone enough to stand for more than a second in front of it. And then the little clues appear, and their imagination kicks in.”

Incidentally, the thought is also Gainsborough’s too, who once wrote a letter of similar spirit to his friend William Jackson: “One part of a Picture ought to be like the first part of a Tune; that you can guess what follows, and that makes the second part of the Tune.” As Wood-Evans puts it, his work is “a process of conflict . . . between representation and abstraction”, between what the artist expresses and what the imagination sees beyond this expression.

“I worry that anything that’s delicate, with any sort of sensitivity, gets lost in this Instagram world. The things that don’t necessarily look that great, because they are too subtle online, are always worth seeing in the flesh. That’s what it’s about, not to look at a fucking phone or whatever.”

After meeting Wood-Evans, I look up Alex Kanevsky’s Instagram post of the Lucian Freud painting, cropped to fit the tiny screen of my phone. “The most beautifully painted boob in the world,” declares Kanevsky. “There’s a whole world in there that the phone of course completely fails to capture.” 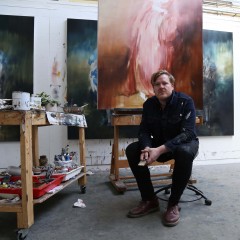 I used to paint walls rather than Old Masters, says artist Jake Wood-Evans

Ahead of his latest solo exhibition Legacy and Disorder, the contemporary artist talks about his work and former life as a painter-decorator