Theatre Unlocked are a Manchester-based Theatre Company, who are currently touring their first production:‘FLUSHED’, which looks at the diagnosis of POI in young women.

POI stands for Premature Ovarian Insufficiency, though it is more commonly known as Premature Menopause. A woman’s menopause is a natural transition which marks the end of her menstrual period. For most women this happens between the ages of 47 and 53, yet for some it comes much earlier; POI is diagnosed when a women is below 40 years of age. Girls as young as 11 years old, experience hot flushes, night sweats, osteoporosis, mood swings, anxiety, headaches, insomnia - the list really does go on, yet as well as this a diagnosis of POI brings the news of infertility.

The trauma of a premature menopause can be massive. Not only is the physical transition exhausting, frustrating, and at times extremely painful, the emotional change can be just as intense. There is a genuine grieving process when faced with infertility, particularly with POI, when there are no answers out there as to what exactly causes it; this sense of loss and unknown can often lead to a host of mental health conditions. A common feeling we have found when meeting women who have been diagnosed with POI, is that of isolation. The condition affects 5% of women under the age of 45, and is not exactly a ‘hot topic’ for conversation, or research. In fact, many people still do not even know what it is! This provokes a feeling that you’re going it alone, and means we should all be working to raise awareness of this condition. It should not be taboo to discuss a women’s menopause in general, and it should certainly not be unheard of to support those going through it at a younger age.With ‘FLUSHED’, Theatre Unlocked hopes to raise awareness, and support for women diagnosed with POI.

We have been working with The Daisy Network, an absolutely incredible charity, who do masses to support young women who have been diagnosed. They are in fact the only charity in the UK which deals specifically with POI. Daisy have been hugely involved with the process pretty much from the off, and have helped with everything from script reads, to promotion, to supporting our performances as audience members. Most importantly though, through the Network we have been able to meet so many incredible women who have experience with POI, and have shared their stories with us. When working on ‘FLUSHED’, it was imperative that we put out an authentic and truthful piece of writing which would educate and get people talking - it really is thanks to The Daisy Network family that we have been able to achieve this.

More information about the phenomenal work Daisy carry out can be found on their website: https://www.daisynetwork.org.uk/

At Theatre Unlocked, we believe that there’s a real place for exploring medical issues through theatre. It provides opportunity to bring the science of it all back down to a much more approachable, and human level. We were invited in fact invited to perform ‘FLUSHED’ at ‘Daisy Day’, an annual medical conference held by The Daisy Network at Chelsea and Westminster Hospital in London. This was a really special experience, as not only were we performing in front of an audience which was mostly made up of women who have been diagnosed with the condition, it was an audience who may likely not have seen their situation represented in the arts; that’s definitely been a highlight of our journey so far!

After a successful run at 53Two Theatre in Manchester, where we were awarded the ‘FOUNDation’ award, a bursary set aside for creatives in the North-West, ‘FLUSHED’ is heading up to the Edinburgh Fringe Festival this August (1-26th). We are incredibly excited to be working with Underbelly this summer, and cannot wait to present ‘FLUSHED’ to as many people as possible, as we believe its a show which deserves to be seen. Our main aim is to engage new audiences with the issue of POI, and get people talking. 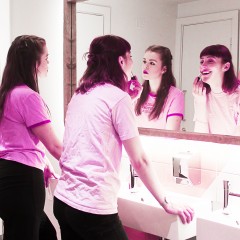 Exploring the trauma of premature menopause through theatre

Theatre Unlocked are a Manchester-based Theatre Company, who are currently touring their first production:‘FLUSHED’, which looks at the diagnosis of POI in young women.