KaddalMerrill is the collaboration of classically trained Egyptian flautist Fayrouz Kaddal (High Dam Band, Africairo) and innovative British folk fiddler Daniel Merrill (Dead Rat Orchestra). Backed by Egyptian master percussionists including Ayman Mabrouk (who has appeared with the likes of Fathy Salama and Gilberto Gil) they come to the UK for their first tour in August.

Combining traditionally melodic instrumentation of flute and violin, KaddalMerrill weave together an uplifting and joyous fusion of Egyptian, Nubian and British musical traditions. Underpinned by exuberant Egyptian percussion and the polyrhythmic drum grooves of Sudanese dance, this is music that invites you not so much on a journey but into the intimate space of the music's creators, as they explore their cultural and musical roots.

The intricate melodies of Kaddal’s flute and Merrill’s violin dive, dance and spin through the heady beats of traditional Middle Eastern drums. Both sun soaked and rain drenched, this intimate music speaks of musicians probing their imaginings of place, culture and identity.

‘This is music we’ve had in mind for some time, since I started spending time in Egypt six years ago’ said Daniel. ‘We always thought that the mix of cultures would provide fertile ground for our creativity’ added Fayrouz ‘but the results have taken us to another place altogether’.

Daniel Merrill is best known for his work with the lusciously bearded free folk ensemble Dead Rat Orchestra. For the last six years he has been travelling to Egypt to make music in Cairo and Alexandria, becoming fascinated with the music of Nubia. Fayrouz Kaddal has performed and recorded with likes of AfriCairo and High Dam Band, exploring the African aspects of Egypt’s heritage. Additionally she is researching the effect of displacement on the music of the Nubian people.

Hear samples from the album and see Egyptian concert footage at www.kaddalmerrill.com

The debut KaddalMerrill album Rain Over Nubia will be released on CD and download on Antigen Records, (Antigen 311) on August 12 to coincide with the tour. It features masterful performances from musicians from Egypt, Sudan and Eritrea. Alongside percussion duo Bouda Abdul-Yazeed and Wessam Moktar, contributors include Ahmed Omar (Eritrean/Egyptian bass player and founder of AfriCairo), Ashraf Awad (Sudanese Oud player with The Nile Project) Zizo Tag (Egyptian Oud player and sometime Pauline Oliveros collaborator) and Ahmed Samir Rashwan (saxophonist with RT Nuba).

Recorded between Krouma Camp, Soheil Island in Aswan, The Sudanese Club in Alexandria, and El Warsha Studios, Giza, the album is packaged with the beautiful illustrations of Egyptian artist Rana Kadry.

The Rain Over Nubia tour is generously supported by Arts Council England. 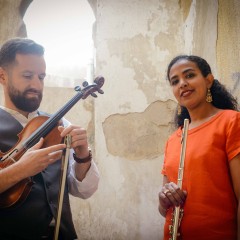