Kit Redstone’s sexily dark comedy follows his internationally acclaimed 5 star Testosterone. A semi-autobiographical jet black comedy about the epic battles and alliances within the psyche & the power of the mind to protect itself from pain

Max wants to tell you a story. He’s not entirely sure why or even who he is. Is he savage, peacekeeper or critic… or all of these? He’s hoping you’ll be able to help. Using the audience as judge, witness, confidante, the three Max’s battle for supremacy over the self through storytelling, cabaret and operatic murder.

PASSENGERS is a semi-autobiographical sexily dark comedy about the epic battles and alliances within the psyche and the beautiful power of the mind to protect itself from pain. Using their trademark blend of comedy, tragedy, playfulness and heart, Vacuum Theatre show us that by understanding that we all have multiple, complex personalities, we can have more compassion and understanding for ourselves and each other.

Kit Redstone has a mild form of Dissociative Identity Disorder (DID). This complex psychological condition, previously known as multiple personality disorder, can often be a coping strategy for trauma. It can make people feel uncertain about their identity and who they are, and they may feel the presence of several distinct identities.

Whilst going through therapy, Kit was introduced to an approach called Internal Family Systems which works on the understanding that we are all made up of different sub personalities. These have different goals and motivations and different levels of maturity, excitability, wisdom and pain. We also have a core, undamaged, resourceful self, and if we can access and work with that self it is a safe, effective way to heal other, hurt parts of the mind.

Through the character(s) of Max and his interaction with the audience PASSENGERS aims to de-stigmatise the often misunderstood diagnosis of trauma related DID and link it to a common experience shared by all. Ultimately allowing us to view ourselves as multi-faceted, fluid and changeable in our identities and ideologies.

‘Since childhood I’ve always loved telling stories,’ Kit said, ‘As a transgender man, I am particularly interested in the complexities of identity and PASSENGERS is my way of addressing that in a playful and celebratory way’

Kit Redstone is an award winning London-based writer, director and performer who has worked in Greece, Denmark, Kazakhstan, Canada and Brazil. His internationally acclaimed theatre show and 2017 Fringe hit Testosterone received multiple 5 and 4 star reviews, won The Pleasance Indie Award for Best Theatre Show, the Highly Commended Award at Vault Festival and was shortlisted for The Samuel Beckett Award.

Passengers is written by Kit Redstone with additional material by the ensemble, directed and developed by Jessica Edwards and performed by Neil Chinneck Jess Clark and Kit Redstone. Age recommendation 16+, duration 60 mins.

Passengers can also be seen at The Edinburgh Festival Fringe 31 July – 25 Aug, 14.30 at Summerhall 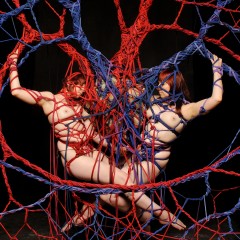 Kit Redstone’s sexily dark comedy follows his internationally acclaimed 5 star Testosterone. A semi-autobiographical jet black comedy about the epic battles and alliances within the psyche & the power of the mind to protect itself from pain