Voice MagBlogs6 of our favourite b…

How many times have you been disappointed by a film that did not live up to a book you coveted? We have all been through the same heartache. So this week, to make up for it, we talk about the films that beat the odds. Read on for our list of the best book adaptations in film.

We’ve all been there. You read a book, maybe even a whole series of books, and you’re blown away. You fell in love with the characters, you laughed, cried and cheered with every story beat, and then you see it in a shop one day with some actor’s face on the cover and a bubble saying, ‘now a major motion picture.’ Your heart sinks, you remember the Percy Jackson movie, and you say a fond farewell to your untarnished memories of the story that defined so many cosy evenings curled up by the fire, transported to another world.

Well, we know how to comfort you. Here, we show you that not all hope is lost and talk about those who beat the odds. Read on for our list of the best book adaptations in film.

Graphic in content and explicit in language, Irvine Welsh’s debut novel Trainspotting came out in 1993 and gave voice to the discontented. It’s filled to the brim with counter-cultural ideas and criticism of modern consumerism. There was the fear that these elements would be lost if they were translated to the big screen. But with the trio behind Shallow Graves at the helm, these concerns were quickly put to rest. Danny Boyle took a very visual approach to the novel. Although he made changes, the invented aspects always found their roots in Welsh’s novel. The iconic opening scene doesn’t have a direct counterpart in the novel, but the shoplifting incident was referred to several times during the text. Welsh may have shied away from the screenplay, but he approved enough of the film to make a cameo on both it and the sequel. High praise indeed for this stellar adaptation.

Bret Easton Ellis’s original book is cold and calculated – though still engaging and dryly funny. However, with Mary Harron as director and co-writer alongside Guinevere Turner, American Psycho is given a much-needed pinch of humanity in its 2000 film adaptation. Without sacrificing any of the book’s winning wit, bite, and gore, Harron and Turner manage to flesh out and humanise the characters, most notably the various women in bloodthirsty yuppie Patrick Bateman’s life. Even Bateman himself becomes a somewhat more sympathetic character, or at least (arguably) a more engaging one. This is also thanks to Christian Bale’s suitably comedic, chilling, and charming performance in perhaps his best role. Personally, I find his performance all the more comedic when keeping in mind Harron’s anecdote that Bale claimed to have based it on none other than Tom Cruise and his "intense friendliness with nothing behind the eyes".

Requiem of a Dream

Originally written as a novel in 1978 by Hubert Selby Jr., Requiem for a Dream was adapted to the silver screen by director Darren Aronofsky in 2000. The film would star Jared Leto, Ellen Burstyn and Jennifer Connelly and famously struggled to find funding due to its chilling content. Aronofsky tells the story of four drug-addled characters, following their addictions- displaying how substances consume and warp the reality of those who are dependent on them. The film manages to evoke the desperation, frustration and devastation that a drug addict would go through, eventually culminating in the deterioration of each character. The movie instils a sense of loneliness and helplessness like no other, mainly due to its excellently written story and truthfully adapted screenplay. It is also most likely the best performance that Jared Leto has ever given, right up there with Dallas Buyers Club.

One of the few occasions when it's considered positive that a film adaptation varies greatly from its source material, 2007's Stardust is the Thalia, to the original book's Melpomene. With author Neil Gaiman taking a less traditional hands-on approach to relinquishing control of his work, its film adaptation is as weird and wonderful as the 1999 book. Under careful guidance and with a shot of Hollywood glitz, the film focuses more on delightful absurdity where the original was concerned with otherworldly perversity. The result is two works as fascinating as each other, in their own right and as two sides of a strange coin. Or, for that matter, two sides of a strange wall.

A superb adaptation of a fascinating book about a terrible film, James Franco’s The Disaster Artist, came out in 2017 to tell the baffling story of Tommy Wiseau’s The Room. The book of the same name was published in 2013 and was written by Greg Sestero, an actor in the original film and good friend of Wiseau. The book detailed the bizarre behaviours of the director, an intriguing and mysterious figure whose passion for filmmaking is rivalled only by his ineptitude at the craft. Where James Franco’s adaptation excels is its ability to capture the stranger than fiction tone of the story. Both are very enjoyable pieces of media, and watching/reading one will make you curious to engage with the other. Or even if you’re feeling brave, try and sit through the original.

Stanley Kubrick's The Shining is the quintessential horror film, and not many since have managed to convey a similar sense of terror. Although not a precise adaptation of Stephen King's acclaimed novel – as expressed heavily by the author – it is universally seen as one of the finest and most iconic cinematic experiences of all time. The film adds themes of disorientation and psychosis that differ from King's original ghost story. Watching Jack Torrance (Jack Nicholson) and his family descend into chaos as a supernatural presence takes them through an intense and unsettling ordeal is truly frightening, partly down to Nicholson's creepy performance, tainted with twisted comedy. The film is superb, its cinematography calculated and symbolic, its score threatening and timeless. The artistic differences between this vision and the book are drastic. However, there is no denying that Kubrick's is far scarier. 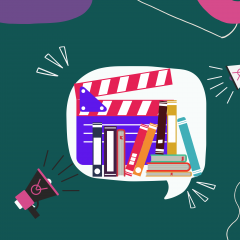 6 of our favourite book adaptations

How many times have you been disappointed by a film that did not live up to a book you coveted? We have all been through the same heartache. So this week, to make up for it, we talk about the films that beat the odds. Read on for our list of the best book adaptations in film.