To talk about the feminist movement in Argentina is to talk about non-comformist, subversive and rebellious women who changed the rules and defied an essentially patriarchical society, fighting for equality and defending their unrecognised rights.

1800’s: Standing out in a society that underestimate them

After Argentina declared its independence from Spain in 1816, it was necessary to establish a Civil Code for the new Argentine Republic, and finally leave behind the colonial normative. This new code, written in 1852 by lawyer and politician Dalmacio Vélez Sarsfield was approved in 1869 and finally became active in 1871. Influenced by the continental law, Vélez Sarsfield included ideas taken from the Napoleonic Code and the Roman Law in his manuscript.

The creation of a code of our own was a necessary part of becoming an independent nation – and it even set the foundations of the Civil Code in force today – but it explicitly sanctioned the inferiority of the married woman; according to the civil law, they had no right over any possessions and they had to ask for their husband’s consent to participate in political, social and commercial affairs. They were even banned from educating themselves.

The Civil Code put women in a position of inferiority to men but the truth is that they were the women who stood out in their society, as educators and precursors of major modifications to pedagogy (Juana Manso 1819-1875); as medical doctors despite the obstacles imposed by men (Cecilia Grierson 1859-1934, our very first female medical doctor); as extremely talented actresses, musicians and writers (Marcelina Almeida, 1830-1880, many of her novels reflected  the lack of women’s rights); and an article wouldn’t be enough to talk about the women who fought shoulder to shoulder with men in the independence wars, only to be forgotten in their time and remembered today (Juana Azurduy and María Magdalena "Machaca" Güemes).

By the early 20th century, it was necessary to implement a democratic system for choosing the members of the government, and the Ley Sáenz Peña (Sáenz Peña Law) was created. It established the three characteristics of the vote:  universal, obligatory and secret. Today, a universal vote means everyone can exercise the right to vote; but back then, universal ment “all argentine males of legal age”.

Inspired by the suffragist movement all around the globe (including Great Britain, the United States, New Zealand,etc), women across the country fought for legal equality. In 1907, Alicia Moreau De Justo (1885-1986) created the Comité Pro-Sufragio Femenino (Pro Femenine Suffrage Committee), and the first Femenine International Congress (held in Buenos Aires in 1910), where women from all over South America claimed the right to vote. By the 26th November elections in 1911, Julia Lanteri (1873-1932), precurssor of the Partido Feminista Argentino (Argentine Feminist Party), became the first South American woman to vote.

Finally, these women acclaimed their definitive victory in 1947 when Eva Perón (1919-1952) achieved the sanction of the law n°13010, that guaranteed the right to vote for women.

Come the national elections of 1952, women were able to vote for the first time, and this was the beginning of a process of inclusion of women in the social and working life as well.

Between the 70’s and the 80’s, Argentina went through a most violent military coup. More than 30 thousand people were declared “disappeared”, the truth was that they were taken to clandestine centres where they were tortured and killed – and their families would never know what happened to them. A group of women gathered under the name “Madres de Plaza de Mayo” (Mothers of Plaza de Mayo) started searching and taking DNA tests to find their disappeared sons and daughters, hoping they were still alive. While some of them were reunited with their families, many of them did not survive. Later, after finding out that pregnant women taken to clandestine centres were forced to give birth and instantly give up on their babies to be taken to a different family, a new organisation was formed: Abuelas de Plaza de Mayo (Grandmothers of Plaza de Mayo). This time, it’s about grandmothers looking for their grandchildren. Today, they are still searching for them, taking DNA tests at special centres and tracing back family trees for people around the age of 30 to early 50s who doubt their origin.

By 2019, 130 grandchildren have reunited with their families.

2000’s: A lasting alliance with the LGBT community

In 2004, the National Government dictated a Plan Against Gender Discrimination, something that had never happened before. This was the starting point for recognition or a previously ignored sector of our society, the LGBT collective in Argentina.

The Federación Argentina LGBT (LGBT Argentine Federation), under the expression “Nosotrxs* también podemos” (Us can too), was the first organisation to take to the Congress the idea of marriage equality and a law of gender identity (before this, many laws criminalised homosexuality in 16 different districts of the country). Both projects were supported by LGBT and feminist organisations, and finally, Argentina became the first country in Latin America – and the second in America (the first one was Canada) – to modify the Civil Code and sanction a law permitting same sex marriage.

2010 to the present: An unstoppable movement

The feminist movement in Argentina is getting stronger everyday.

In 2015, and in the face of the alarming increase of cases of misogyny and femicide, the “Ni Una Menos” (“Not One Less”) movement was born. It aims to raise awareness about gender violence, from identifying cases of domestic violence to claim more action from the government when it comes to the justice system or protecting the victims.

In 2018, Ni Una Menos and all the active feminist organisations got together to continue a process that began in 2004: a law project for the decriminalisation of abortion. After two years, on December 30th 2020, it has become legal and guaranteed to be a free and safe process.

Feminism has always been a crucial part of our history, although sometimes unrecognised. It is thanks to the bravery of the women of our past and our present that all of us can access the basic rights that were denied to us for so long; from education to deciding over our own body.

The feminist struggle in Argentina is a solid pilar of our society, with an immense trajectory behind and a revolutionarily fierce future ahead.

* In the Spanish language, we often use vowels “a” and “e” to specify the gender of a pronoun (“a” is feminine and “o” is masculine). In order to respect the gender identity of every person you’re referring to when using plural pronouns like “nosotros” (we), when writing, you can replace the vowel “o” with the consonant “x”, which is gender neutral. Likewise, for speaking, you can replace them with the vowel “e” (“nosotres”). 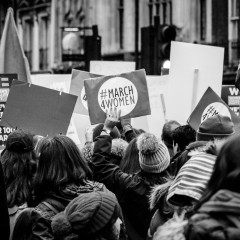 Dissident sorority: A brief history of feminism in Argentina

To talk about the feminist movement in Argentina is to talk about non-comformist, subversive and rebellious women who changed the rules and defied an essentially patriarchical society, fighting for equality and defending their unrecognised rights.