It’s been almost a year since Rina Sawayama released her now-iconic single ‘XS’ and debut album Sawayama. But midway through last year she learned that she was ineligible to be nominated for both the BRITs and the Mercury Prize, as she was not a British citizen. Sawayama was born in Japan but has lived in the UK for 26 years and holds indefinite leave to remain in the UK, but retains a Japanese passport to allow her to visit family – some of whom live in Japan. As Japan does not allow dual citizenship, she cannot have a British passport.

And this is what caused the problem. The artist’s critically-acclaimed album was ruled ineligible, despite cries on social media using the hashtag #sawayamaisbritish – which trended on Twitter in the UK. Only after nine months of silence did the British Phonographic Industry – which oversees both the BRITs and Mercury Prize – announce that they had agreed to change their eligibility criteria. The rule change stated that artists must meet one of three criteria to be considered: be born in the UK, hold a British passport, or have been a permanent resident for more than five years.

Sawayama posted a statement on Instagram to say she was ‘over the moon’ and thanked fans for their support. Her win was celebrated by many fans and artists worldwide, including the likes of Elton John and Ashnikko, who will also now be eligible for a BRIT. 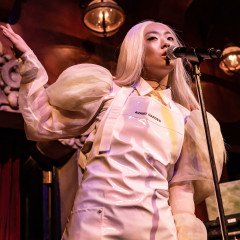 Rina Sawayama’s battle for the BRIT