Voice MagBlogsThe dangers of the ‘…

What makes a good immigrant?

It’s easy to picture a stereotypical ‘bad immigrant’ and even easier to think of the buzzwords used to describe them. ‘Free-loaders’, ‘criminals’, ‘unskilled’. But the existence of a bad immigrant implies the opposite, a good immigrant. The ‘good immigrant’ on the other hand is harder to define and articulate.

From the mid-19th century, to the Windrush generation and the migrants from the European Union, immigrantion is ingrained in British history and British present. Many of these immigrant communities and families have lived in this country generation after generation and have become part of the British population. Some have ‘assimilated’, voluntarily or involuntary: assimilation is when a minority community begins to resemble the beliefs and behaviours of the majority. Over time, these immigrants from various corners of the world have brought their values and cultures with them, for example the array of temples and Mosques and the creation of a ‘Chinese takeaway’. Historically and more so in the modern day, there has been the use of  ‘good’ vs. ‘bad’ immigrant rhetoric, used to create hierarchies between immigrant communities: this dichotomy is not only dangerous within itself but is also reflective of themes of xenophobia and racism that lie deep within British society.

After Boris Johnson’s short time in hospital, he paid special tribute to his nurses, ‘Jenny from New Zealand’ and ‘Luis from Portugal,’ These immigrants are evidently one of the good ones as they are praised by British leaders and thousands more, clapping in the street for NHS heroes. These medical professionals are two of the thousands of immigrants who serve in the NHS and rightly getting the appreciation they deserve. But this somewhat sudden gratitude for NHS workers contrasts starkly with the government actions and policies.

At the beginning of 2020, Home Secretary Priti Patel launched a points-based immigration system aimed to reduce the number of immigrants to the UK. The new system required visa applicants to meet a set of criteria, such as ability to speak English and certain academic qualifications. In a chilling speech at the 2019 Conservative Party conference, Patel said she has ‘a particular responsibility when it comes to taking back control’. Her ‘responsibility’, as she calls it, is ‘to end the free movement of people, once and for all’. Her policies target the so-called bad immigrants; the freeloaders and criminals that we are told ruin British lives, steal from the NHS, take British jobs.

It follows that an immigrant must be hard-working and be well educated in order to achieve the status of a good immigrant. There is an elevation of the good immigrant identity, of the dedicated immigrant NHS workers, against their outcast counterparts, like Romanian fruit pickers and Syrian refugees. While good immigrants continue to be praised, bad immigrants are demonised and dehumanised through negative media attention and misinformation.

In a 2020 YouGov poll, 1461 adults were asked the question: ‘When in the UK, are you bothered when you hear those from a non-English speaking country talking to each other in their own language, or not?’ Over a quarter of those surveyed said they would be ‘very’ or ‘fairly’ bothered by people speaking in their mother tongue. In a country where one of the four proudly declared British values is ‘mutual respect and tolerance’, it is concerning that many regard foreign languages with suspicion. A report by the Migrant Observatory found that around 13% of the foreign-born population said that they had been insulted because of their ethnicity, nationality, religion, language or accent.

So the good immigrant should have a professional job, as well as hard-working and educated. They must be quiet, have good English, preferably without an accent, and never speak in their heritage languages. This is all whilst contributing to society, without taking away any opportunities from others.

As a study by King's College London's Policy institute, Ipsos Mori and UK in a Changing Europe found, large proportions of British people are still hanging onto misconceptions created through intentional misinformation spread by politicians. In order to figure out the views of British people, researchers compared public beliefs about immigration with the evidence collected by the Migration Advisory Committee (MAC). The MAC report found that from 2016 2017, ‘EEA (European Economic Area) migrants as a whole are estimated to have paid £4.7bn more in taxes than they received in welfare payments and public services’. The researchers asked 2,200 people if they thought that European migrants paid around £4.7bn more in taxes than they received, if they paid ‘about the same’ as they received, or that they paid around £4.7bn less in taxes than they received in welfare benefits and public services. Just 29% of the public got the right answer. This pattern continued throughout the study. 39% of the public think European immigration has led to a decline in healthcare services, even though MAC evidence shows this is false.

Despite pockets of the British public believing in incorrect facts about immigration, the good immigrant should not bring up the times when they’ve been asked where they’re from, when they’ve been made uncomfortable or any experiences of othering and discrimination. In the 80s and 90s, the phrase ‘Tebbit test’ was coined by politician Norman Tesbit. He believed questioning what cricket team young South Asians and Carribeans could prove how ‘British’ they were. If they picked their heritage country, this was a sign that they were not ‘integrated’ into British society.

Nowadays, the tests to determine whether immigrants are good or bad are more complex and often unachievable. It shouldn't fall to immigrants to lead their lives in a certain way just to make other British people feel comfortable with their existence. Movever, immigrants are and have for many years been integral to the development of British society. The good vs bad immigrant dichotomy is dangerous and insidious within wider British society as it continues to fuel misconceptions and is an ever-changing, unreasonable standard for thousands of normal human beings. 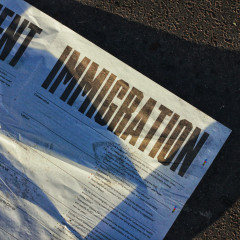 The dangers of the ‘good immigrant’ narrative

What makes a good immigrant?