Gigi talks about her auditioning for the second time at drama schools impacted her mental health and how the pandemic has changed the audition process.

What a year! 2020 has been a very emotional rollercoaster!

I thought I'd talk about my experience for auditioning for drama school, how it impacted my mental health and the results! I also thought it might be helpful to talk about this on Arts Award Voice in case anyone else is about to or has been through this.

I started out by auditioning for LAMDA, Guildhall and Bristol Old Vic Theatre School with the first and last being my ideal schools. My hart was set on Bristol, I'd been offered a foundation at LAMDA last year but decided against it as it was too expensive. I had Bristol Old Vic in early November followed byLAMDA late December and Guildhall early January.

Bristol Old Vic was the dream. I'd been to courses in the summer which made me fall in love with the place and its ethos. I travelled down to Bristol excited and pumped for my first audition of the new season. Wide eyed and raring to go. I was given my sight-reading and knew that I was happy with what I had to do. I went in to 2 panellists, performed my pieces, sight-reading, sung my song and had an interview, asking about my gap year and job and why I wanted to go to the school. I was ecstatic for the rest of the day. It was the best thing I'd ever done.

RESULT: The next day at 8.40. I got an UCAS email. I knew I hadn't done it. I was heartbroken. To be so rejected by the place I thought knew who I was and the kind of actor I wanted to be was painful. Genuinely painful. All that work and money spent getting there, to me was wasted. But - it spurned me on.

LAMDA changed its audition system so you had half a day at the school. In your group, you had a movement session with an alumni in industry and the Head of Movement. A really lovely and relaxing experience. Then you split in two halves. We performed speeches in front of this panel and our 5 other peers then attended had an individual interview. I found the panel audition really amazing. I performed my speech once which they gave feedback I found very constructive. They only redirected half the group, one of those 3 being me. They seemed very happy with my performance and I came away very positive. Hopes not up, but positive I'd set myself up right. The interview was pretty standard, asking about what I was up to and why I wanted to go to LAMDA. I did splurge a bit and over talk but they wanted authenticity I suppose!

RESULT: final round recall! but not my year - too young, but what an achievement. Mental health - took a while to get the result but what a feeling.

Guildhall was another tough day. Starting with a group workshop, which I found, actually - really dull. Then proceeding to a one-by-one audition. The wait was excruciating. I was third to go and the agonising wait after was awful. I performed three speeches and was redirected in quite bizarre ways - running around, as toothpaste. I wasn't entirely happy but thought I'd done a good job. The interview was quite brief and I didn't really feel the panel wanted to get to know me. They were both graduate.

After the wait, they told you, in front of everyone who'd got through. That really made me feel worthless. They did make the point that while Guildhall may not be the place for you, doesn't mean that others won't be.

With this new found gusto and a teary eyed tube and train journey home and £64 out of pocket. I applied to Rose Bruford, Oxford School and Drama and RADA as soon as I got home.

Oxford School of Drama was a new lease of life. The workshop with the whole group was right up my street - dance, movement, feeling music, painting an imaginary canvas and clowning. The speeches for the panel went well but, with my past record I wasn't too positive, despite being very ahppy with myself. Then, after lunch and another agonising wait, the 40 people were called into a room. They read out 6 names. We went to a separate dance studio and got told amazing news. I got a recall. I burst into tears. At this point, this was the furthest I'd ever got (I heard my LAMDA result the day I got this audition result). I left the school at 6pm in a pre-paid taxi with 3 others, I wonder what they are up to now... The recall involved improv, sight reading, re directing speeches, mime and joking around. I threw myself into it and thought I gave a good interview impression too.

RESULT: I got a foundation offer! I was super stoked! I took it but ultimately declined.......

Rose Bruford was a few days later. A very odd experiencce, we had a discussion of the play 'The Crucible' from a performer and academic point of view. I gave my thoughts, debated openly with other applicants and rolled A Level history facts off my tongue for the scary course leader. I then performed my go to speech as some light hearted fun (everyone else's was dramatic) and found out a month or so later I'd been offered a place! No recall - just an offer! What????!!!!!

Then disaster. A week before my LAMDA recall, the country went into lockdown. My RADA first round costing £76 I didn't have and my LAMDA final round were self tapes. I didn't get through to the 3 year courses at RADA but I did get a foundation offer and I didn't get into LAMDA. I do wonder if I had been there if I had have got into LAMDA especially as group work and improv are my strong suits. I'd also never self taped before so I'm glad I could learn a new skill quickly.

I also auditioned for Drama at UEA and Drama and Film at Manchester and got unconditional offers. This gave my such confidence that I was doing something right.

I'm so proud to say I'm going to Rose Bruford! I'm so hyped and excited to move to London - to a collaborative and practitioner based environment.

I'd love to thank Jen Dewsbury, my acting coach, Gaz Brown my vocal coach and my former boss Tim Clarke for their on-going support. I'd got to the stage with auditioning that I chose my speeches in the moment I faced the panel - to see what my heart chose and wanted to do. This felt so liberating and ultimately paid off!

But these auditions are a silent killer. Mentally, this year was with massive highs and the lowest of lows. Particularly as this my second year trying. I didn't want to mess up and not get in anywhere again. Then I have to think. Catherine Tate took 5 years, Judi Dench took 7. Sometimes, truly, the best results take time. And as drama schools keep saying - experience.

My advice to auditionees. Pace yourself. This is a time to show who you are. It's sharing your work. And...laughter is the best medicine. Don't let a global pandemic stop you from living your dream - watch, read and keep your creative juices flowing.

Juniper from Many Moons

Hermia from A Midsummer Night's Dream

Girl from My Mum's a Twat 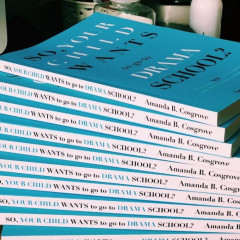 Gigi talks about her auditioning for the second time at drama schools impacted her mental health and how the pandemic has changed the audition process.