I sat down with poet Luke Wright on Zoom to discuss his successful live performances on Twitter, as a result of his nationwide tour being cancelled due to lockdown.

As part of my Creativity in Lockdown series, I spoke to the award-winning poet, Luke Wright, about his daily online Twitter performances, his looming new collection, and how he stays motivated during the lockdown. Luke Wright performs his poems, every night on Twitter at 8 pm. Wright’s performances are a great source of entertainment for these most mundane of times. They’re full of feeling, fierceness, honesty, and social commentary.

The following transcript has been edited for length and clarity.

Can you tell me a little bit about yourself and your creative background?

My name is Luke Wright, and I am a poet and a playwright. I have been making work for public consumption for 21 years now, since I was a teenager. When I was 17, I did my first gig, and I saw some poets; I saw John Cooper Clarke, Martin Newell and Ross Sutherland performing their poetry on stage and I’ve never seen anything like it before. It was like they were part stand-up comedian, and part singer in a band, but without any music and all the words were doing the heavy lifting. It was clever, funny, profound, and sad, and I just thought, I want to do that: I decided quite young what I wanted to do. I never thought that I’d be able to do it as a job, I just thought it would be something that I did for a few years, and then I’d go and get a real job, but I managed to hold it together and make a living out of it.

I’ve been making work for 21 years and genuinely what I do is I make stage shows out of a set of poems. I tend to pick a theme, some idea that I want to discuss and do it through using poetry. More recently, I’ve been writing these verse plays, which are a single story told in verse like a monologue that I sort of tell in character; I’ve done three of those.

What made you want to do live shows on Twitter, and how are your online shows going so far?

Yeah, it’s nice. When they announced all the theatres were closing, it felt like a deeply sad and depressing thing to be cancelling all of these dates in my diary, so I wanted something to look forward to. I thought I’d start these shows online and because I don’t do things by halves, I was like, “right I’ll just go online every night at 8 pm,” which is a decision I made on the 19th March.

We’ve done 42 gigs so far, and they’re going good. I’m starting to feel more comfortable sitting in front of the camera. I forget people are there, and I just sit down and read about six poems, which I select based on my mood and what I fancy reading that night. I’ve got quite a lot to fall back on; not so much that I’ve had to repeat myself, but I’m hoping that they bear hearing more than once. Obviously, not everyone tunes in every single night, although there are some pretty dedicated people who have seen every single show, which I feel immensely grateful for and flattered. It gives me a bit of structure to my day; otherwise, it can feel quite unstructured.

I read that you had always wanted to do live shows, but you were self-conscious. How did you overcome that to the point of now having done 42 shows?

Well, it was a necessity. I’ve always wanted to, and I’ve quite liked the idea of doing a live feed, of being connected with people out there in the world just through my phone; I thought that was quite exciting. But I thought, what would I do? Why would I do it? It felt a bit weird. But then there was the opportunity with all this being cancelled, so I went online, and I did one poem, and I was all like “Is anyone there? Can you hear me? Here’s a poem”, you know all sort of nervous, and I could hear people like, “Yes we can hear you, we like the poems'', and I was like, “Oh okay great so would you listen if I did a gig?” and half the people went, “Yeah, yeah”.

The first one was great; there were like 10,000 people who watched or at least watched for a few seconds. It’s dropped off now, which I think is quite reasonable. Even if you were a fan of my stuff you wouldn’t want to watch every single night, but I think for some people it's been a comforting thing; they know that I’m there regularly – a bit like the 6 o’clock news. We’ve all had a bit more time on our hands, or certainly a bit more time in the house, so some people have found it comforting – well that’s what they’ve told me.

It’s human connections I like making with people. It’s one of the reasons I make art, one of the reasons I travel around the country performing – I like people on the whole. One of the good things about doing this kind of work is, I have to really make myself write because it’s obviously always easier not to write but to just sit around and do nothing. The good thing about doing gigs is that you book them monthly, a month in advance, and you have to go and do them because you’ve agreed to do it, and I think that’s quite good to have some kind of invisible mask that says you have to do this otherwise I would just procrastinate. 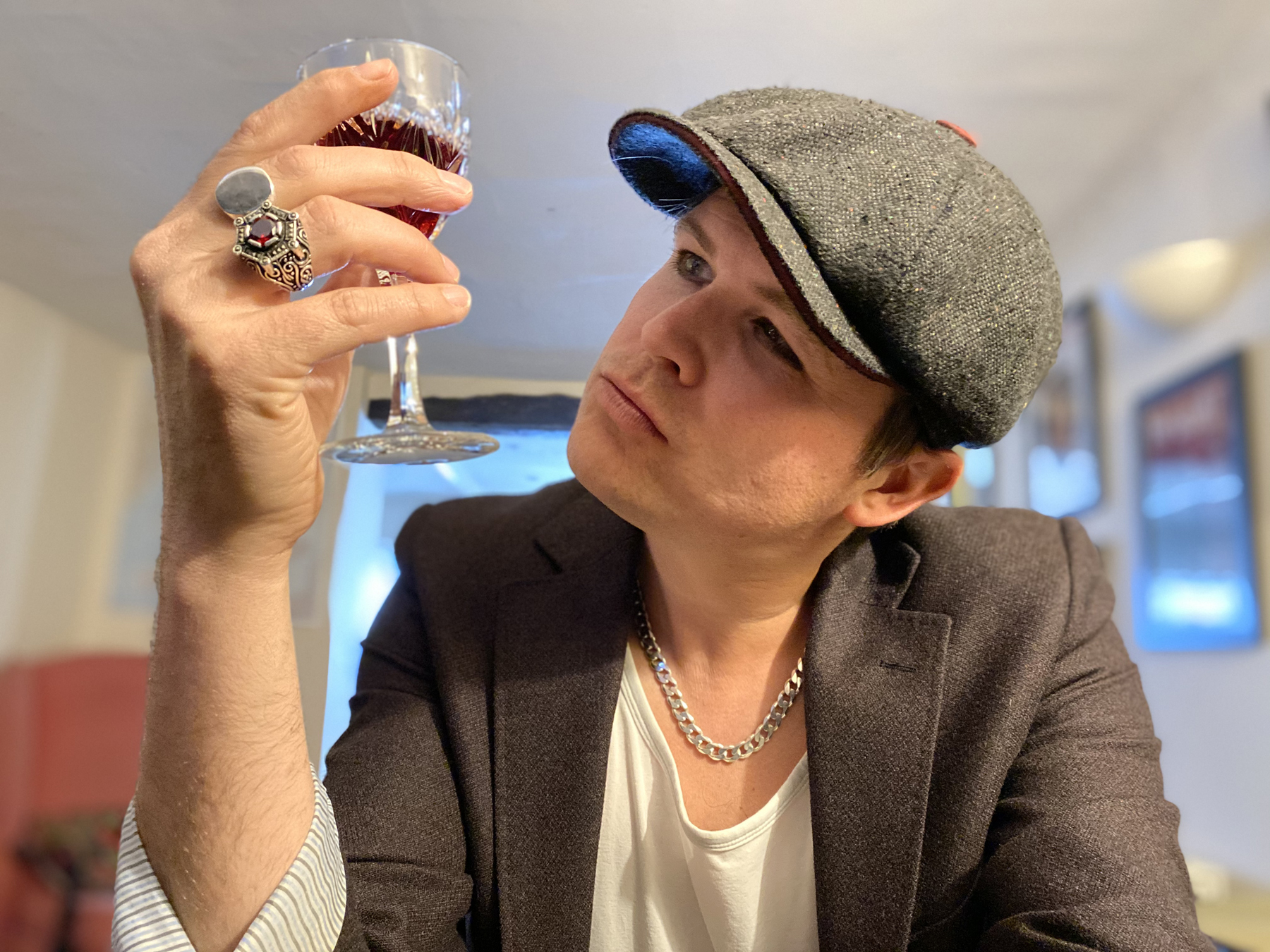 How do you stay motivated in times like this?

Oh man, Saskia, how do any of us stay motivated in these times? I mean plenty of times I don’t feel motivated at all. It’s always the same when you do a regular gig though; you can feel really downbeat like, “ah I don’t want to do it, I’ve got no energy, I just want to go home”. But the actual process of doing the gig is nearly always positive; I always feel energised coming back from it. It’s like anything really; you’re sitting on your sofa feeling completely unmotivated, really depressed and downbeat, and you just force yourself to get up and make a cup of tea. You can use the energy from making a cup of tea and doing another activity and another one. It’s all about actioning yourself into inspiration, and from that inspiration, the motivation will come.

I think it has always been about doing little manageable things, so actually doing the gig is enough to really make me feel better and a little bit brighter.

Are there any other artists that you’ve been watching online, who are doing similar things to you, or maybe in a different field, that you’ve really enjoyed?

Well I know that Robin and Josie Long are doing this daily show called ‘Surf Ball’. I’ve been on there a couple of times and they have been really nice little chats I’ve had with them and guests. But, to be honest, I’m trying to write and also home-school my children. I’ve got my kids four days a week, home-schooling, so we spend our time doing that. I watch almost nothing – I haven’t been doing the Netflix thing at all. I’ve been reading and writing and also just walking as well. I live out in the countryside, so we’re really fortunate here in that I can get out of the house easily without seeing anybody. That’s kind of been my coping strategy – just keep moving!

Do you think lockdown will change the way that we enjoy performances that we typically see live in the future?

Possibly, but it’s a poor substitute for the real thing. I mean, I like the idea of having an online audience, perhaps once a week I could show people what I’ve been up to and show them new stuff. That might be a good way of doing it, because I don’t always want to make videos and I don’t want the video to stay there forever. The idea of just doing something more ephemeral, like a stream performance, I quite like doing that, but it’s just not the same thing, you know? Live performance is a wonderful special thing, and I really hope we don’t lose track of that and lose sight of it, you can’t beat it.

Can you tell me a little bit about your new collection? You mentioned it on your show that you have a new one coming out.

It’s going to come out in March next year. I haven’t got a title yet; I’m still working on that. It’s going to feel – for people who have seen my stuff before – like quite a bit of a shift. It’s much more personal, more honest: it’s sort of tougher on myself. It’s more of a tearjerker; there’s not really much funny stuff in there. I don’t really do silly well anymore. It’s going to be more of an emotional journey.

What are Luke Wright’s top tips for our readers coping with lockdown?

Every episode of my Creative During Lockdown series can be found here. 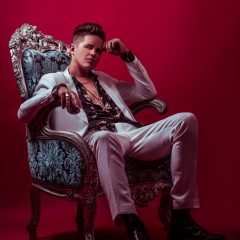 In conversation with poet Luke Wright

I sat down with poet Luke Wright on Zoom to discuss his successful live performances on Twitter, as a result of his nationwide tour being cancelled due to lockdown.