In the final book of this YA Fantasy trilogy, I try and conclude whether the series ‘A Court of Thorns and Roses’ is truly worth its hype. Strap in for a whistle stop trip through ‘A Court of Wings and Ruin’.

This is it folks. The third and final instalment in the ‘A Court of Thorns and Roses’ series by Sarah J. Maas. So far, the only parts that lived up to their hype were namely the endings of both novels. But also, the intricate world building and character development of major characters in book two are standout points that deserve a mention too.

The final instalment of the ‘A Court of Thorns and Roses’ trilogy begins with a sudden (out of character?) badass Feyre back in the Spring Court. While she spends the first third of the book pretending to be the ‘docile’ wife Tamlin always wanted to be, she’s secretly undermining everything Tamlin does to collapse his entire court.

While this is incredibly satisfying in the short term to read, the fact that Hybern enemy soldiers literally come to stay in his manor house would suggest that creating chaos isn’t in anyone’s interest. But, for like most of the series, Feyre lacks any kind of long term thinking and ultimately leaves a whole kingdom susceptible to an enemy army. At best this stupidity was annoying to read, at worst it had me questioning if this is something Maas’ own readership would pick up?

That being said, the scene when she crushes Ianthe’s hand with *mInD pOwErS* so she can’t molest anyone ever again did bring a smile to my face. Another of my favourite things in this book (and series) is the fact that after being a lame friend with no real plot purpose, Lucien finally gets a redemption arc!

As Feyre and Lucien flee through the Autumn and Winter Courts, their time bonding together this arc, and it slowly progresses through the book. This arc ultimately leads to him choosing a selfless mission in which he travels to another continent in search of a magical queen who might help them win this final battle.

In fact, almost the entire book is just made up of battle preparation scenes. Frustratingly, it read like a majority of the mediocre middle books in YA fiction trilogies, which all serve to simply ramp up the stakes for the climactic ending. If this was the middle book it might have been possible to forgive A Court of Wings and Ruin, but this IS the climactic ending to the trilogy, and we had already endured this grind in the previous book, although on a smaller scale.

One of the stronger scenes was the meeting of High Lords, during which Rhysand and Tamlin have a bit of a word battle. Yet even this failed to really impress, especially given Tamlin’s characterisation as a toddler who’s toy (Feyre) has been taken from his pram. I just felt that there was so much potential for a deeper rift to be explored and it came across as a wasted opportunity.

Although there are smaller skirmishes peppered throughout, you know that due to their placement in the book there’s no true danger for the main characters, even if a few minor ones are lost along the way.

The culmination of this book – and indeed the series – is the climactic final battle we’ve spent two books talking about. It would be an overstatement to say that A Court of Wings and Ruin can be considered as ‘above average’ based on the scenes that precede it, however, the war is a saving grace that left me feeling satisfied.

It’s always hard to write a well flowing epic battle scene that rounds off an entire series of three books. It’s even harder to do so in a succinct manner that ties together character development and gives readers an ending that they’ll fiercely love no matter the outcome.

This is without a doubt one of those endings.

Given the successful payoff, I’m inclined to give Maas a pass for the occasionally pedestrian and plodding nature of the series. She deserves credit for writing a pleasing trilogy for her readership, who lets not forget are predominantly teenagers. For that market, I suspect this series is a real win, even if it fails to really win over a wider audience. 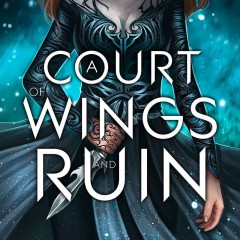 Are YA Fantasy's All They're Hyped Up To Be: A Court of Wings and Ruin

In the final book of this YA Fantasy trilogy, I try and conclude whether the series ‘A Court of Thorns and Roses’ is truly worth its hype. Strap in for a whistle stop trip through ‘A Court of Wings and Ruin’.