Voice MagArts AwardBlogsThe Oscars are and a…

My arts issue is the lack of representation of female voices and stories at the Academy Awards 2020, with male stories repeatedly dominating over more emotional and personal female stories on a mainstream Hollywood platform like the Oscars.

Increasingly referred to as the ‘Academy Awards,’ the Oscars are going into their 93rd awards ceremony this weekend on the 10th Feb 2020 and as usual Oscar snubs are being written about seemingly by everyone. My Oscar snub this (and every) awards season is women.

It is widely known that the ‘Best Director’ category has been a male-dominated category for almost a century now, with only five women ever nominated. Kathryn Bigelow is still the only female winner of this category, having won the award in 2010 for ‘The Hurt Locker:’ a film that doesn’t even pass the Bechdel Test.

This is key due to key stats that the ‘Best Director’ winning film often goes onto win ‘Best Picture,’ with Auteur Theory placing the director as “the major creative force” behind their film. By this logic, the film awarded for best direction is overall the best film.

That leads me to my next issue, the representation (or lack of it) of women in films nominated for ‘Best Picture.’ This in fact motivated me to investigate this issue further with the lack of female-related stories angering me: does a film need to explore male issues and lives to be recognised as a good, or even worthy, film by the Academy?

The diagram below demonstrates the issue clearly, with only 2003 winner ‘Chicago’ having a larger proportion of words spoken by women. Formerly mentioned ‘The Hurt Locker’ (2010) does not have any named female characters, while ‘Schindler’s List’ (1994) seems to have no female characters with more than 100 words spoken. 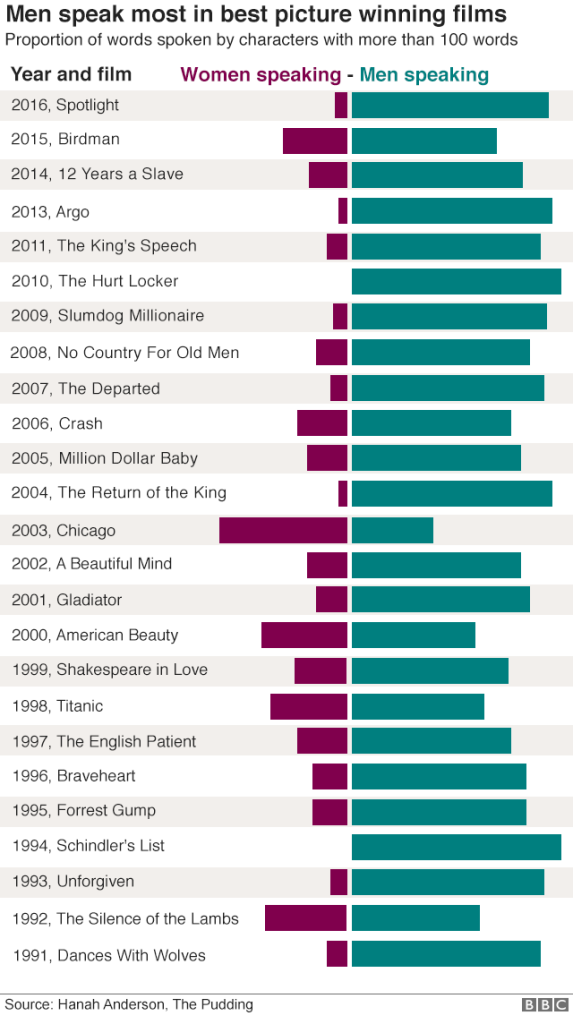 This demonstrates the gender divide on screen, perhaps also illustrating the gender pay gap in Hollywood, with The Guardian reporting in September 2019, that “male Hollywood stars earn $1.1m more per film than their similarly experienced female co-stars.”

In the 2020 nominations, the argument is clearly displayed with case studies of ‘The Irishman’ and ‘Little Women.’ Both films are nominated for ‘Best Picture,’ but Gerwig’s directing has been overlooked, while Scorsese has a ‘Best Director’ nomination as well. In my opinion, this demonstrates the way in which more subtle, emotional female stories may be belittled in spite of their mastery for more ‘flashy’ male stories, that some argue may need more directorial thrust, than the quaint period drama.

"The films dominating the Oscars are 1917 (war), The Irishman (mafia), Ford vs Ferrari (cars) and Once Upon A Time in Hollywood (Tarantino)" ~Emma Jones

As Emma Jones summarises above, it is clear that this year’s awards season in particular has been skewed towards familiar male stories, perhaps stretching to stories centring on toxic masculinity (more on that here).

For fear of being trapped in my own echo chamber, I also decided to conduct some research on Reddit (a platform infamous for outspoken male voices).

One post described the “annual SJW [social justice warrior] crusade for female directors” and expressed that people disagreeing with the treatment of particular races or genders should simply “change the channel.”

Another Reddit user stated that “crying about a lack of women at the Oscars” is pointless, as it is the same as moaning about “the fact that people like different movies than you.”

Please feel free to leave your thoughts in the comments below and I will be reflecting upon these and the treatment of female stories and filmmakers at the Academy Awards 2020 in my next blog post. Thank you for reading.

My arts issue is the lack of representation of female voices and stories at the Academy Awards 2020, with male stories repeatedly dominating over more emotional and personal female stories on a mainstream Hollywood platform like the Oscars.