Voice MagBlogsGrant for the Web –…

It took a while, but the egalitarian nature of the internet has been corrupted, and we are now at a point on the internet where only the biggest players make any money. The big players can afford to put out free content, but other, smaller creators are going to struggle to fight for people’s attention.

What if we could have payments on the web that worked like the web – money flowing, and payments followed your web browsing? That is exactly the idea for Grant for the Web.

The Grant for the Web is a five-year programme exploring ways of developing new technologies and creating a new business model for the web. It is funded and led by Coil, with support from Creative Commons and Mozilla.

The session started with a panel discussion with Adrian Hope-Bailie from Coil, content creator Cris Beasley, and Andrej Mazur from Enclave Games.

We got an explanation of how Coil works through the Interledger protocol (a means of connecting two payment ledgers together - I don’t fully understand it…), and what its eventual hopes are for the payment process.

Cris talked about how she earns basically nothing from content that she dedicates her life to, and how she hopes that Coil, and Grant for the Web will “bring the web back to human scale”. She felt that the current web model is broken, and as soon as you introduce an engagement metric into the mix, it’s winner takes all, which favours the big players. She further wonders what will get funded in a different economic model, before speculating that it will look very different, which can only be good for diversity on the web.

Andrej runs enclave games with his wife, who is  a graphic designer. He was impressed with how quick and easy it was to engage web monetisation. It’s one line of HTML to show that content is web monetised, and then a small amount of javascript to indicate that something is paid subscriber content, allowing you to cordon off content. He said it was great that you didn’t have to worry about cookies, and tracking customers. You are able to detect a paying customer within your own code liberating you from dependencies on third-parties.

When asked what each of them hope will come out of the Grant for the Web, they all had quick answers.

Adrian talked of his excitement about a new payments network emerging, and the opportunities it opens. He thinks monetisation is crappy, but payments on the web are bad generally too, and hopefully this will fix it.

Cris was excited to see the art that can flourish as a result of it. “I want to see the art! Artists are amazing at doing something with a tiny amount of money. It doesn’t really take much to change our lives.”
Andrej thought that it would present a viable option of monetisation for content creators on the web, and hopes for it to be the default option. He further hopes that it frees creators to spend more time being creative, rather than worrying about whether they need to set up a Patreon, or Kickstarter, or whatever. “Creators should be able to earn enough to make the work they want.”

For more information about Grant for the web, you can visit their website. 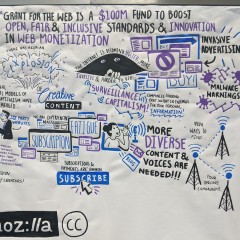 Grant for the Web – Improving monetisation with open standards