An article about two pop-up exhibitons created over the summer to promote popular entertainment - Disney Theatrical's 'Disney In The West End' and Netflix's 'Into Thra: The Dark Crystal Age of Resistance Exhibition.

We are all used to seeing films, TV shows and plays being promoted with posters, trailers and TV adverts. However, major productions have recently come up with a unique and creative way of promoting themselves. They have created pop-up mini exhibitions which blend interactive activities and photo opportunities with information about how their products were made. These represent a fascinating combination of the mercenary motives which define promotional activities and the public service which is the central focus of the museum world.

This summer, there have been two major pop up exhibitions in the heart of London, both themed around popular entertainment. The Disney in the West End Pop Up, created by Disney’s Theatrical division, returned to Covent Garden for a second successive summer. It promoted Disney Theatrical’s long-running stage version of The Lion King, their adaptation of Aladdin (which closed last week after a three year run), and well as their forthcoming productions of Mary Poppins and Frozen. The second (running until 7th September) was created to promote the new Netflix series The Dark Crystal: Age of Resistance, a prequel to the Jim Henson cult classic The Dark Crystal. This exhibition is being held at the BFI Southbank, and its creators have pulled out all the stops to advertise the world of the heroic Geflings and the monstrous Skeksis. It would be a bit insulting to compare these trivial with the important of museums, but there is plenty of entertainment value in these immersive pop-ups, and even some educational material for those interested in the making of films and theatre. Here are four reasons why these immersive pop-ups are so appealing.

1. The opportunity to Interact with the action

Exhibitions at museums allow you to get up close to normally distant worlds, and immersive pop=up exhibitions also rely on this for their appeal. One unusual similarity between the two is the presence of a gaming stall. The Disney pop up had an Aladdin themed arcade game, perfectly suited to the early 90’s nostalgia embodied by the original film. The Dark Crystal had a far more modern Nintendo Switch video game, but one which embodies the fantasy ethos of a show containing THREE Game of Thrones stars (Natalie Emanuel, Lena Heady and Natalie Dormer) in its voice cast. Videogames are the ultimate in interactivity, as they allow you to take control of the characters you love and send them off on adventures of your own choice.

The highlight of the Dark Crystal Exhibition is a immersive display which is located in the conference room. A path takes you through various scenes and settings, with the puppets and their environment being shown in great detail. There are also clips from the Age of Resistance series, revealing what these characters look like in the finished series. Although you aren’t able to actually touch the puppets or props, the audiences are able to take photos and get far closer to their world than they could on TV. The most entertaining attraction in the exhibition is a voice-over booth where you could indulge in your dark side by voicing one of the grotesque Skeksis- voice-acting is much harder than it appears. The Disney in the West End pop up is far smaller, but still finds a variety of ways to bring audiences closer to the characters they know and love. There are opportunities to meet the casts of The Lion King and Aladdin, and enjoy a virtual experience which allows you to see The Lion King’s signature Circle of Life sequence in a whole new way . There are even activities based on musicals which are yet to arrive in the West End. The Frozen musical is yet to find a cast or announce a firm opening date, but Disney Theatrical still found a way to include it in their experience. Frozen is represented through a novelty photo booth, where you can take a photo of yourself in a wintry wonderland. This is not the most impressive attraction, but Frozen is one of Disney’s most popular brands, so even this trivial activity can provide pleasure for the fans as the musical prepares for its arrival in London in late 2020.

2. The opportunity to learn about the production

The first half of the Dark Crystal exhibition includes plenty of photos, drawings and a booklet full of impressive production designs. You learn how much fabric is used to design the robes of the Skeksis, and see how the Geflings are turned from metal, latex and fur into living, breathing protagonists. In addition, there are several videos and photos depicting the puppeteers hard at work. They may be overshadowed by the INCREDIBLE voice cast for Age of Resistance, but their fast-paced and demanding work makes them the most important people in the production. Although the Disney pop up is far less informative, with four musicals crammed into a single small space, they still manage to provide some technical information on one particularly impressive production. Over 2 decades after it premiered on the West End, The Lion King is Disney’s biggest West End musical by some distance, and unsurprisingly, it dominated the Disney in the West End pop-up. The front half of the exhibition consists of Lion King puppets and costumes, created by director Julie Taymor and costume designer Michael Curry. Taymor and Curry’s “double event” outfits allow both the performer and their animal to be constantly visible, giving the characters unique personalities without losing sight of their animal nature. The expressive “Double events” played a major role in making The Lion King into Disney Theatrical’s most successful and acclaimed production, and the information about how they are made and used highlights their magical appeal. When you are watching a show on stage or screen, you can get so caught up in the action that the technical details used to create it don’t register. However, learning about these details really increases your appreciation for the people who brought these works to life.

3. Fun For All The Family

Given Disney’s popularity amongst children, it is no suprise that the Disney in the West End pop-up is primarily geared towards a younger audience, with attractions including a ‘supercalifragilisticexpialidocious’-themed word game and the Aladdin arcade game. In addition, there were several family activities during the day, including puppetry sessions and kite-making workshops. This child friendly approach also finds its way into the Dark Crystal exhibition. Even though The Dark Crystal is scarier than any Disney production, it is still primarily aimed at families, so the exhibition contains a lot of interactive activities, including a mini quiz and colouring in. When arriving, visitors are invited to put on novelty Gelfing ears. This is probably the only corny touch in the entire exhibition, but it is still forgivable when the props and puppets are so impressive. In addition, there is a considerable child-friendly appeal to seeing a fantasy world up close.

4. Perfect for the Age of Experiences

The stereotype that “millennials” (i.e those who came of ages in the 1990s, 2000s and 2010s) prefer experiences to traditional material purchases is based on two things. Firstly, the recession and the dominance of austerity has made them reluctant to spend money on unnecessary goods, with adventures and attractions representing much better value for money. Second, the growing awareness of the climate and biodiversity crises means a lot less enthusiasm for mindless consumption of plastic trinkets and other novelty gifts. Mini exhibitions provide a way of appealing to these more discerning audiences. There is still plenty of merchandise available at both events, but these are a bonus, allowing you to enjoy the exhibition long after it has concluded.

The immersive experiences can be compared to the more attractions seen at theme parks, which are grander and more spectacular, as they are made to be enjoyed for months or years rather than just days or weeks. However, despite their far more limited scale, immersive experiences such as these are far more convenient. When you visit a theme park, you must make the long journey out of town, pay large sums of money for tickets, and spend plenty of time queuing before you visit each attraction. In contrast, pop-up exhibtions are totally free and situated in central London locations where members of the public can just drop in and enjoy an hour or so of escapism.

Despite their limitations, pop up immersive exhibitions represent an excellent way of promoting entertainment to the general public. Both Disney Theatrical and Netflix have used their pop-ups to entertain and amuse audiences of all ages whilst also providing some insights into how their productions are made. I have a feeling that these pop-up exhibitions will become far more common in the future, as film and TV companies use them to showcase the characters and worlds in a colourful and engaging way.

I am a history graduate with substantial experience volunteering in the museum sector. My primary interests are museums, film and theatre. 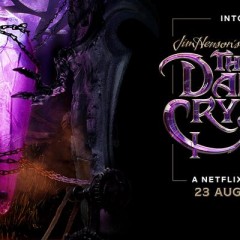 An article about two pop-up exhibitons created over the summer to promote popular entertainment - Disney Theatrical's 'Disney In The West End' and Netflix's 'Into Thra: The Dark Crystal Age of Resistance Exhibition.