Many museums have begun to provide 'open' exhibitions which go beyond the traditional exhibition spaces. This can lead to thought-provoking and creative displays, but needs to be done carefully...

Usually, exhibitions in a museum are confined to a specific gallery or set of galleries. However, some institutions try to do something more unusual with their layout, providing 'open' exhibitions which expand beyond the confines of a single area and stretch throughout the museum. Done well, this approach can shed new light on the role of art, culture and even individuals in our world, emphasising their relationship with their surroundings. That said, this approach does come with a variety of risks.

One of the most prominent art exhibitions in currently on in London adopts this more open approach. The new Olafur Eliason exhibition at the Tate Modern (which will last until January) begins even before you enter the exhibition space. Some of his exhibits can be seen in the halls, including a fan suspended from the ceiling and an installation of bright yellow lights in one of the corridors, which make all objects beneath it appear in black and white. One of the most interesting items is ‘The Fog Couch', a seemingly ordinary sofa with a very unusual design - its shape invokes the movement of waves and sand on a beach when you sit down. None of the items are as impressive as the foggy walkways and wave generators in the exhibition itself, but they provide excellent appetisers, highlighting Eliason’s interest in geometry and the natural world, and his wonderfully unconventional approach. They also function as a promotional tool, as people who are visiting the museum for free may be inspired to pay for a ticket to the exhibition. However, this approach may not always be appropriate. An exhibition on more traditional art is not going to take this approach, as the focus is on the content of the artwork rather than its relationship with the wider world. Therefore, putting paintings like these outside the main galleries would be a distraction and could diminish the exhibition as a whole.

The best use of the ‘open’ approach comes from smaller museums such as the Foundling Museum. When both the regular galleries and special exhibitions are covered by the same ticket, providing a greater overlap between the two allows the temporary additions to feel even more valuable. The Foundling Museum used this approach for their 2016 exhibition FOUND, where they invited a variety of artists (including Gavin Turk and Cornelia Parker) to create work related to the theme of found objects. Some of them placed their items in the exhibition space in the basement, but the most interesting installations were spread throughout the building. It was certainly fascinating to see a bronze sleeping bag in the lavish first floor galleries, and a dented hubcap amongst a collection of fine plates. Although the immersive collection-wide approach of FOUND was entertaining, it served a more serious purpose as well, as it highlighted the ignored and overlooked status of the children who were taken in as foundlings by the Foundling Hospital.

Other organisations have also used this expansive approach in order to put a new perspective on familiar locations. A wide range of National Trust locations marked the Women in Power season (commemorating 100 years since women first gained the vote) by highlighting the roles played by the various prominent women who inhabited famous estates. For example, the lavish Kingston Lacey house in Dorset (home to the wealthy and influential Bankes dynasty since the late 17th century) features an exhibition called Behind the Portrait, paying tribute to four prominent female members of the Bankes family. There is a small gallery for this exhibition on the ground floor (highlighting findings from the Bankes family archives) but there are further installations in all the rooms, highlighting the things each of the four women did. These exhibitions use their larger format to demonstrate the importance of women, and the way in which their hard work shaped the estate and the people around them.

However, the ‘open’ approach does not always pay off. The Jewish Museum London recently provided The Charms of Frankenstein, an exhibition from the artist Maya Attoun. Celebrating 200 years since Mary Shelly’s legendary scary story was published, the exhibition featured several unusual items which reflected many of the themes and issues which have made Frankenstein so popular. Some items from the Jewish Museum collection (including a religious object made from bone) were also incorporated into the Attoun’s work, and others were even secretly replaced and altered. An image of the Jewish writer Grace Aguilar was replaced by one of Bride of Frankenstein star Elsa Lancaster, whilst a recording of shabbat prayers in another gallery was replaced by a voice reading Frankenstein in Hebrew. There were no conventional signs, with visitors instead receiving a planner and looking for pictures which matched each of the items listed (all of which were numbered according to the weeks and months of the year). The concept was certainly creative, but a lot of the people who visited the Jewish Museum were confused by it. A lot of great art poses mysteries and leaves unanswered questions, and these qualities are especially important for an exhibition themed around the supernatural. Unfortunately, this non-traditional approach can alienate audiences, particularly in a museum which is primarily focused on history rather than art. Therefore, it is unlikely that the Jewish Museum will provide an exhibition as unusual as 'The Charms of Frankenstein’ in the near future.

Ultimately, the extension of exhibitions outside of the confines of the traditional galleries depends on three important things: their nature, their subject matter and their venue. Sometimes, an exhibition may benefit from a conventional approach, as more unusual formats could be inappropriate and confusing. However, when done right, an 'open' design can really be creative and exciting and allow us to think more about the concepts and messages at the centre of the exhibition….

I am a history graduate with substantial experience volunteering in the museum sector. My primary interests are museums, film and theatre. 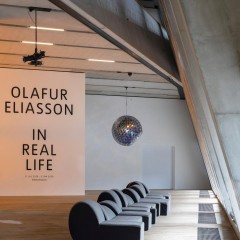 Beyond the Gallery - How to Make an Exhibtion Unique

Many museums have begun to provide 'open' exhibitions which go beyond the traditional exhibition spaces. This can lead to thought-provoking and creative displays, but needs to be done carefully...