Voice MagBlogsWriting only from ex…

Some call it a politically correct fad. Others call it a long-needed social revolution. Whatever your stance, it is hard to ignore the recent rise of criticism regarding the misrepresentation of minorities in literature and in the media. It is clear that minorities are often stereotyped, bypassed or simply not portrayed frequently enough in the arts currently. A report by the Annenberg Inclusion Initiative has found that in Hollywood, only 14% of protagonists are of colour, only 2.5% of characters have a disability, and less than 1% of characters are from the LGBTQ+ community.

Some argue that this is because of institutionalised prejudices, or a lack of popularity for minority characters from audiences and studios alike. However, in our society of ever-increasing political and social awareness, there may be another problem at hand. Is it because the white, able-bodied, straight men - who constitute the majority of writers and authors - don’t feel able to properly write characters from minorities?

For decades there have been criticism about the portrayal of female characters by male authors. Feminists have categorised their objections into three brackets. Male authors seem to misrepresent female characters via their prejudiced tone, their impossible beauty standards and their distorted approach to love interests. This is summarised by the ‘Bechdel Test’ - a set of criteria by which to judge the representation of women in films. That is not, however, to say that ALL male authors fall into these traps. On the other hand, it does appear that without personal experience about the life of a woman, some male writers struggle to create convincing female characters despite their best attempts.

This begs the question as to whether experience is a necessary supplement to imagination. Can you ever accurately represent a minority group in your writing if you are not from that group yourself?

The key, naturally, is research.

It’s a tricky line to tread - avoiding stereotypes and offence without straying from the purpose of a story. However, with thorough, sensitive and nuanced characters, I do believe it is possible.

But this is not the only issue up for debate. The next concern is as follows: when white, able-bodied, male authors write characters from minorities, is it an example of presumptuous entitlement? Sadly, there are shockingly few authors from these minorities on the professional radar. Several highly acclaimed writers with disabilities, such as Shane Burcaw and Octavia E. Butler, are making strides in this field, but these authors are few and far between. This leads several critics to wonder whether these authors should be given priority when a show needs a character of a similar experience to them. Contrastingly, no one is suggesting that these authors cannot also write white, straight, able-bodied characters too.

This case of positive discrimination is especially prevalent in today’s political climate, when quotas and reports on diversity are being introduced to several fields of employment. However, I believe that there is a stark difference between encouragement and exclusion.

I believe our focus should be on an increased and accurate representation of characters from minorities. This is not to say that encouraging writers from minorities is any less important, but merely that it should be treated as a different issue. If you lump these two issues together, then writers of minorities will be pigeon-holed into solely writing characters of their own experience, which is an extremely damaging notion.

With the topic of representation being so important yet so sensitive, perhaps there should be a diversity steering group established to approve of writing before publication. However, I do believe that any writer can create any character, with the strong provision of thorough research being conducted. This is because I theorise that critiqued male authors, whose female characters were disapproved of, struggled because they felt there wasn’t a need to research women. Thus, assumptions were made and damage caused. However, as long as the writing is approved by those from the portrayed communities, I don’t believe that experience should become a provision for imagination. Instead, writers of all creeds should be encouraged to create diverse characters in their works, stimulating a shift in social attitudes towards those of experiences different to our own. 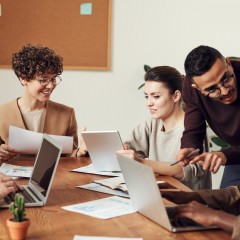 Writing only from experience