Voice MagBlogsWomen in Film: The B…

All airheads and flirts?

In 1985, American cartoonist Alison Bechdel decided that enough was enough. For too many years women had boosted movie ticket sales with their bodies instead of their brains. After having read a 1929 Virginia Woolf essay, Bechdel created a comic strip laying out a set of rules, now known as the Bechdel test. The rules were simple, strict, and specific, and have not changed since conception. They state that a movie must:

3. about something besides a man.

But this uncomplicated set of criteria is surprisingly difficult to meet. Upon judging movies by this test, it will become apparent to any and all that women are being underrepresented and misrepresented in the modern media. Not only does this highlight the unequal status of women in beloved classics, it demonstrates that gender issues in Hollywood still persist. Women are too often used as supplementary characters or eye candy, appearing without agency or heroism. Even when they are portrayed with strength, it is often due to politically correct crow-barring - with writers creating a conciliatory character to appease feminists. This is why the Bechdel test requires more than one female character to appear on screen - to ensure that they aren’t there tokenistically. Rule three seeks to challenge the notion that female characters are there only to either inflate the male protagonist, or to fight over him. Additionally, having women only discuss men stereotypes them as passive gossipers or flirts.

However, passing or failing the test is not necessarily indicative of how well women are represented in any specific work. This is because a movie could pass the test yet still contain sexist commentaries, while a movie about a single female protagonist could fail the test despite its message of female empowerment in a male-driven world.

Media industry studies indicate that films that pass the test financially outperform those that do not. This prompts several potent questions about why movie producers don’t therefore always adhere to the Bechdel test’s rules. Is it because men are the main consumers in the media industry? Perhaps the recognisable and thus popular movie format requires a male-centred plot. Perhaps our institutionalised prejudices prevent us from valuing female heroines in the same way as their male counterparts. Or perhaps the large-scale production companies aren’t promoting gender equality enough for it to become fashionable in films.

Some critics say that these issues are arbitrary due to the narrowness of Bechdel’s criteria. Although I would agree that it is not the most thorough judge of female representation in movies, the number of movies which fail it remains shocking. If not always an indicator of female empowerment, it still highlights the outrageous shallowness of female characters today. Thus, the Bechdel Test persists as a reminder of gender inequality in the media regardless of its comprehensiveness, and should be treated with the same weight it held back at its conception in 1929. Clearly the same placards of protest used then cannot yet be discarded!

- Lord Of The Rings 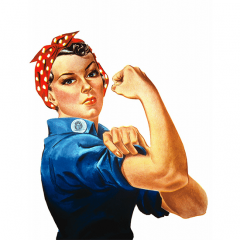 Women in Film: The Bechdel Test

All airheads and flirts?