Starting from the bottom now they’re here. A panel of industry professionals from TheatreCraft’s 2018 careers fair open up about their first steps in theatre

Long before she became Theatr Clwyd’s Artistic Director, Tamara Harvey was pouring orange squash for actors at her high school production. It was only after a lighting designer recommended her for a job that she picked up her first solo gig as a director.

‘That’s not a link you’d necessarily make,’ says Harvey, referring back to her directorial debut and the lighting designer. ‘You never know who’s going to talk to someone about you.’ Yorke and Rubasingham raise similar points, noting that ‘sometimes opportunities come in the most surprising way.’

Initially, Harvey wanted to be a ballet dancer. It was only after shadowing directors that she decided she’d rather their job instead. Her story reminds us that careers are rarely straightforward and always defined in retrospect.

Thankfully, aspiring directors no longer have to scour college shelves for a dusty tome containing contacts for internships, as Harvey did. Although, simply pointing out that there’s greater access to information and opportunities seems to avoid the big question.

What are young theatre makers up against today?

Whilst it’s probably true that there are ‘as many routes to directing as directors,’ Harvey is the first to admit that it feels harder for young people, who are just starting out in their careers, compared to previous generations.

‘Sorry, that’s not what you want to hear,' she says. 'The poor pay makes it hard to make a living from it, particularly earlier on. I think these are really uncertain and difficult times, and that just makes everything feel a little more difficult.’

The panel’s chair, journalist Matt Trueman, recently suggested in an article for The Stage that it may feel harder because it is. If austerity has left theatres in an impossible position, it’s no wonder that Harvey reports fewer opportunities due an increase in co-productions, as theatres and companies try to weather the storm together.

So, now we know what we’re up against, let’s have a look at the panellists’ top tips for crafting a career in theatre.

How to get your work programmed

Getting your foot in the door is tough. But it’s not going to happen if you’re not visible to the industry and haven't built up a portfolio of work.

As far as Rubasingham is concerned, she has six slots to fill in a 300-seater theatre and needs to make a 65% box office. ‘And that’s not including the fundraising,’ she adds. ‘I need to know that work is of a certain quality and will bring in audiences.’

For Harvey, it’s a similar story: ‘I’m unlikely to instantly programme an idea from someone who I don’t know; not least because, every time we put on a play at Clwyd – and the same is true of all theatre, I think – it’s a huge risk. It doesn’t mean they have to have been doing it for forty years, but I need to at least have a knowledge of them, of their work and of their working methods.’

Building a portfolio alongside contacts not only gives you credibility but also fosters trust on the part of the employer. You're more likely to be brought on board when you're active, visible and have a body of work which showcases what you do. Which brings us to our next heading.

Unsurprisingly, mentorship is a common thread throughout the discussion. Who do you know and what kind of impression have you made? Rubasingham agrees that it is important to find someone who will taking you under their wing, and most of the panel say they’d experienced this at some point during their career.

For some, this will be a matter of being in the right place at the right time. Oram was lucky enough to be hired as an assistant by theatre designer Paul Farnsworth off the back of his final year show: ‘Paul saw the final show and said, ‘Can you start Monday?’’

For most graduates, this will sound like some hallucinatory, career-day fever dream. One moment, its rose-tinted employment, the next it’s cold sweats, budget cuts and never-ending internships. At this point, the panel reminds us it's not a race. If it doesn't instantly work out the way you planned, you're in the majority and there is something you can do about it.

Starting with the link below, TheatreCraft provide some useful resources within their programme. Subscribe to newsletters, seek out opportunities and join the conversation.

‘I think tenacity is really key,’ says Rubasingham. ‘But sometimes it’s never about how good you are, it’s about your willingness to stick at it. When you get the knocks and you’re not working, when you’re not employed, how long will you stick at it?’

‘Be prepared to spend time doing a job that isn’t the job you want to do, and hopefully less so the further on you get. But quite a lot of your time is spent doing another thing, whether that’s waiting tables or ushering or [working at the] box office.’

‘Keep your receipts, do all your accounts,’ says Oram. ‘I cannot tell you what a nightmare it is when you don’t, and I really do know that from personal experience.’

For more advice on this topic, check out Emrys Green’s article on how to be a self-employed creative.

It helps to see the bigger picture

Do you have to have worked several different jobs in theatre? Not necessarily, but it certainly helps to build an understanding of your role, says Harvey: ‘It’s become more important, as an artistic director, to know what you’re asking of people.’

‘To an extent, you are asking people to work towards your vision, for that show or for that building. I think it really helps if you know what it means when you’re saying I want this enormous set, or I want this for tomorrow, or we’re going to start asking for box office donations.’

‘I felt more comfortable making those asks if I had, in some small way, done a version of that job.’

This is a good one to end on. ‘Kindness and courtesy are really important,’ says Harvey, ‘not only because it’s the right thing to do and the right way to be, but also because you never know when an opportunity will arise.’

In other words, it literally pays to be kind. Be prepared to find the jobs wherever you can and know that opportunities can arise from the most unlikely of places. ‘Never be grand,’ as Yorke puts it, and you never know where you’ll end up. 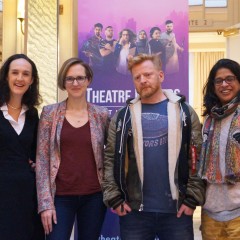 TheatreCraft 2018: How to build a career in theatre

Starting from the bottom now they’re here. A panel of industry professionals from TheatreCraft’s 2018 careers fair open up about their first steps in theatre